The Exaltation of the Holy Cross


Gordon Plumb has posted on the Medieval Religion discussion group as follows to mark today's Feast of the Exaltation of the Holy Cross, and which I have slightly revised and supplemented:

The Feast of the Exaltation of the Holy Cross celebrates two historical events: the discovery of the True Cross [ The now discontinued Feast of the Invention of the Holy Cross on May 3rd, a feast which appears to originate in seventh century Gaul - so not exactly a new feature - and dropped 1960 from the Calendar commemorted that more specifically] by Saint Helena, the mother of the Emperor Constantine, in 320 under the temple of Venus in Jerusalem, and the dedication in 335 of the basilica and shrine built on Calvary by Constantine, which mark the site of the Crucifixion. This feast was observed in Rome before the end of the seventh century. It also commemorates the recovery of the Holy Cross, which had been placed on Mount Calvary by St. Helena and preserved in Jerusalem, but then had fallen into the hands of Chosroes, King of the Persians. The relic was recovered and returned to Jerusalem by Emperor Heraclius in 629.


Here are some late medieval stained glass images for the feast of St Helena:

Ashton-under-Lyne, Greater Manchester, album of images of the south aisle windows depicting the story of St Helen. The fullest coverage of the Helen legend in English glass, c.1497-1512:
https://www.flickr.com/photos/22274117@N08/albums/72157652182098552
This series depicts the discovery of the Cross and also its recovery by Heraclius. 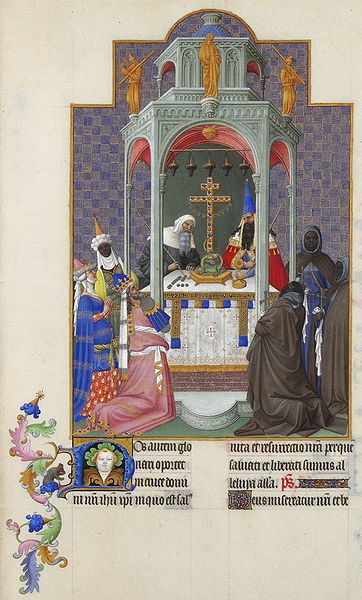