Today is the anniversary of the death at El Escorial in 1598 of King Philip II. I recently read the latest biography of the King, which is Geoffrey Parker's Imprudent King : A New Life of Philip II, and published by Yale U P. 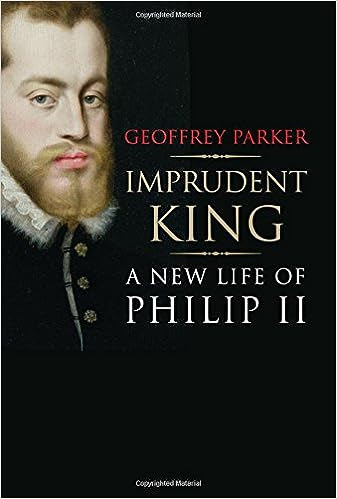 The publishers - who, in my opinion, produce exceptionally handsome and reasonably priced books - say of the subject matter within: " Philip II is not only the most famous king in Spanish history, but also the most infamous king in English history: the man who launched the Spanish Armada was the same man who attempted the assassination of Elizabeth Tudor. This compelling biography of Europe's most powerful sixteenth-century monarch begins with his conception (1526) and ends with his ascent to heaven (1603), two occurrences surprisingly well-documented by contemporaries. Geoffrey Parker draws on decades of research and a recent, extraordinary archival discovery - a trove of 3,000 documents in the vaults of the Hispanic Society of America in New York City, unread since crossing Philip's own desk. Some of the documents confirm what is already known about the king. Others change the picture significantly. The book examines Philip's long apprenticeship; his three principal interests (work, play and religion); and the major political, military and personal challenges he faced during his long reign. Parker also reviews Philip's reputation in legend and history, offering fresh insights into the causes of Philip's leadership failures: was his empire simply too big to manage, or would a monarch with different talents and temperament have fared better? "

I think this is a remarkable book, which combines massive scholarship, and genuine academic and human insight, with an eminently readable style.

Few rulers of any age have left so complete an insight into their minds and ways of working as King Philip, with his endless annotation of official papers and his mixture of candour and obfuscation. Geoffrey Parker makes full use of all this to lead us into King Philip's world and mind.

What emerges is a portrait of a man, in many ways quite ordinary, but by reason of his birth, upbringing and inheritance quite extraordinary. Prosaic, self-disciplined, dedicated, devout, compulsive, pettifogging, struggling to keep his empire together, always seeking and striving to get the right answer to the problems he faced and to do the right thing ( a recurring idea in his comments), and despite his best efforts to get and respond to information often reacting too late, or offering too little.

In many ways King Philip shows typical Habsburg qualities of duty and dedication to the cares of governance, seeking to fulfil what he saw God was calling him to do. This sense of having a direct line to the Almighty sustained him, but may well have led him to what with hindsight one might see as unwise or disastrous political decisions. Prof. Parker also makes the point that on several crucial occasions the King came very close to achieving his grand aims.

In showing the limitations of  ruling a major power - indeed the European super-power of its day - this is a sobering book, and not just for historians. Its lessons should be taken on board by modern politicians.

Immensely readable and written with pace and breadth of vision I would warmly recommend it to anyone interested not only in the period but in the nature and exercise of political power.