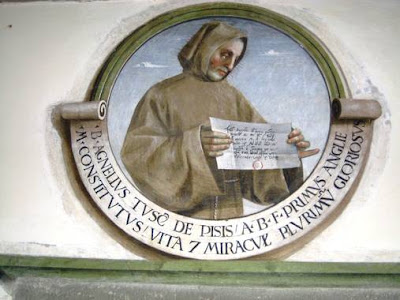 
Today is the feast in the Birmingham archdiocese of Bl. Angnellus of Pisa, who led the Franciscan mission to England in 1224 and who was buried - and venerated - in the medieval Oxford Greyfriars.


In 1224 Francis decided to send some friars to England and appointed Agnellus of Pisa to lead a small expedition. On Tuesday, 10 September of the same year, a small boat landed near Dover and nine roughly-dressed figures disembarked, and so the Franciscan Order was implanted in England. The nine friars were led by an Italian, Agnellus of Pisa, who had previously been Custos in Paris. It included three Englishmen who had joined the Order, probably in Paris where many Englishmen of the time went to study, five Italians and one Frenchman. Within seven weeks of arrival they had established friaries in Canterbury, London and Oxford, the ecclesiastical, political and intellectual capitals of England.


Fr Cuthbert, the founder of the Capuchin house in Oxford, produced a translation of Thomas of Eccleston's  De adventu F.F.minorum in Angliam in 1903 which can be read online at
The friars and how they came to England

Now we have both the Capuchins and the Conventuals in Oxford, reviving and continuing a venerable spiritual and academic tradition.