Today is the feast of St Giles, one of the Fourteen Holy Helpers, patron of cripples and many others, and of many churches built in Britain in the years following the Norman Conquest, when his cult arrived from France. In England 162 ancient churches were dedicated to him and at least 24 hospitals. Amongst those is the church of St Giles in Pontefract where I was baptised and where I worshipped for many years. He is therefore a saint whose aid I invoke in my prayers and for whom I have a special regard.

The story of the Greek-born hermit who was discovered when he was wounded by a royal huntsman who had shot at the hind who provided Giles with milk, and of how the King Wamba (?) founded a monastery for the holy man is well known. There are online accounts of his life at  The Life of St Giles at Saint Giles  and at A Catholic Life: St. Giles.

Devotion to him spread across most of Catholic Europe in the middle ages.

Here are some depictions of the most famous incident in the life of the saint. I do rather like the aggrieved look on the faces of both the saint and his hind in the first example. This is one of the panels of the Garamszentbenedek Altarpiece, which in now in the Christain Museum in Esztergom
.
Nicholas, a canon of Győr, who was also cantor of the royal chapel in Buda Castle, in 1427 commissioned Master Thomas, painter of Coloswar (Kolozsvár) to make a polyptych for the high altar of the Abbey Church at Garamszentbenedek (today Hronsky Benadik, Slovakia).

Ending in a pointed arch, the central picture of the polyptych (which consists of nine panels) represents the Crucifixion, the internal wings are decorated with four episodes of the Passion and the external ones with scenes taken from the lives of several saints. (One of the latter has been lost, and so has the predella with the inscription about the donation.) The panel representing St Giles is the top quarter of the external wing on the right, its rounded corner following the line of the arch of the central picture.

The hermit, who lived in a forest, was nurtured by the milk of a tame hind. The king's huntsmen pursued the animal, and instead of wounding the deer it pierced St Giles's breast. This moment is recorded in the painting. The saint bears the pain with a meditative, pious countenance. The arrow is depicted in the picture twice, perhaps because a single arrow rushing in the air may have introduced too great a tension and lack of balance into this lyrical scene. The hind taking refuge with the hermit is also characterized by calm stillness. The artist may have used a drawing from a model-book of the period for this work, which is indicated not only by the calmness of the animal as if it were part of a still life, but also by its movement: the model of the animal looks as if it had been drawn with all four legs underneath it, but the painter, adjusting the model to the painting, represented its right foreleg streched out. Though the hunter s figure is much smaller than that of St Giles, the lines of the rock in the foreground and the light colours of the foliage of the forest seem to lead one's eyes to him. In accordance with the style, which had a predilection for elegant, curving lines, the painter stressed the impressive and buoyant line of the bow, which is beautifully set off by the darkness of the forest. A drawing of an archer from an artist's copybook, and of uncertain date and provenance, but of about 1400 and which is closely related to the figure in this painting is now in the collection at Christ Church in Oxford, and currently on display in their 250th anniversary exhibition.
In the international life of King Sigismund of Luxembourg's court at Buda, Thomas de Coloswar had an opportunity to become familiar with the leading movements in painting of the period. The panel representing St Giles has similarities to Bohemian art. The rocky, wooded landscape - to quote Antal Hekler - "the colour of a fairytale in spite of its awakening realism" reveals features akin to the art of the Master of Trebon and the illuminators working under his influence.
Adapted from the Web Gallery of Art 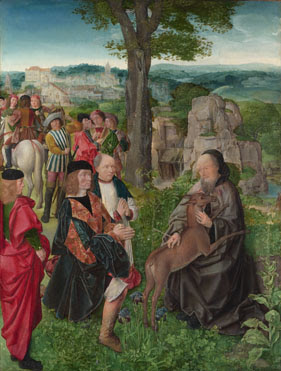 St Giles and the Hind


The Master of St Giles, circa 1500
The National Gallery London
Image: nationalgallery.org

The Mass of St Giles
The Master of St Giles, circa 1500
The National Gallery London


The miracle depicted has been set before the high altar of the Abbey of Saint-Denis near Paris. Many of the objects shown can be proved to have existed in the church. This is the only surviving representation of the church as it was in about 1500.

Charles Martel (?) (kneeling left) could not bring himself to confess a sin. He asked Saint Giles to pray for him. While Giles was celebrating Mass, an angel placed on the altar a paper on which was written the King's sin and his pardon, dependent on his repentance. The incident is said to have taken place in Orléans in 719. In some forms of the legend Charlemagne replaces Martel.

This and 'Saint Giles and the Hind' are part of an altarpiece which included 'Episodes from the Life of a Bishop Saint' and the 'Baptism of Clovis' (both now in Washington).