Today is the feast day of St Thecla, the female spiritual companion of St Paul. Less well known today she has enjoyed a considerable amount of interest in the past. There is an online account of her legend here

On the Medieval Religion discussipon group Matthew Heintzelman posted that link and added from an old dictionary of saints:


“Thecla was miraculously saved from burning at the stake by the onset of a storm and traveled with Paul to Antioch of Pisidia. There a nobleman named Alexander desired Thecla and attempted to take her by force. Thecla fought him off, assaulting him in the process, and was put on trial for assaulting a nobleman. She was sentenced to be eaten by wild beasts, but was again saved by a series of miracles when the female beasts protected her against her male aggressors.”

The ever assiduous John Dillon posted as follows:

This presents her as a nobly born young woman of Iconium (today's Konya in Turkey) whose determination to remain virginal arouses the hostility of parents and lovers, who is converted to Christianity by St. Paul, and who is condemned to death by the Roman state, after which she survives attempted executions, converts her mother, lives as a recluse in a cave, miraculously avoids being raped by brigands by going into a cleft in the cave that closes behind her, and finally dies a natural death. Her many sufferings make her a martyr.

Widely venerated in medieval and modern Christianity, Thecla of Iconium was dropped from the Roman Martyrology in 2001. In the Roman Rite her feast today remains on local calendars (e.g., at Tarragona, which has putative relics of her said to have been translated from Armenia and where she is the patron saint). Ambrosian-rite churches celebrate her today. Byzantine-rite churches celebrate her on September 24th.


Some period-pertinent images of Thecla of Iconium:

a) as portrayed (at bottom left; listening to the preaching of St. Paul) on a panel of an earlier fifth-century ivory casket of Roman manufacture (c. 430) in the British Museum, London:
http://tinyurl.com/qyeauea

b) as depicted (between two angels in the upper register and, in the lower register, between a male and a female lion) on a fifth- or sixth-century limestone roundel of Egyptian manufacture in the Nelson-Atkins Museum of Art, Kansas City (MO):
http://tinyurl.com/ouajwou
In one of the failed attempts at executing Thecla she is exposed to the beasts but is protected by a fierce female lion who kills a male of her species when it rushes at the intrepid heroine.

c) as depicted (at left; at centre: St. Paul; at right: the BVM) in a probably fifth- or sixth-century fresco in the so-called Chapel of Peace in the Bagawat necropolis in Egypt's Kharga Oasis: 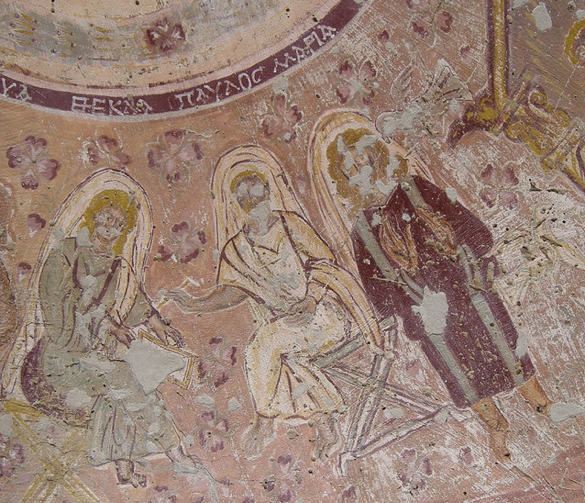 d) as depicted (at left, listening to St. Paul at centre; at right: Thecla's mother, Theocleia) in a sixth-century fresco in the so-called Grotto of St. Paul in Ephesus: 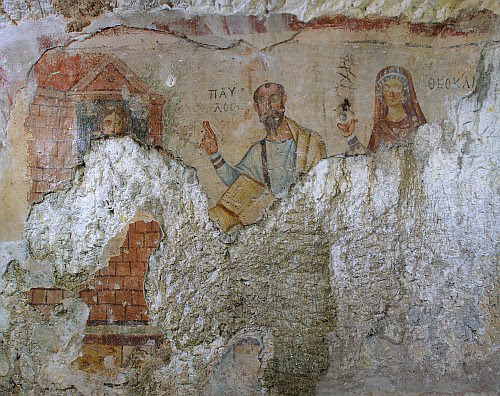 e) as depicted (between a male and a female lion) on a sixth-century pilgrim's flask, depicting both her and St. Men(n)as of Egypt, in the Musée du Louvre, Paris:
http://www.flickr.com/photos/antiquite-tardive/128179152/

f) as depicted (at center in this view, betw. Sts. Euphemia and Valeria) in the earlier to mid-sixth-century mosaics of the presbytery arch (carefully restored, 1890-1900) in the Basilica Eufrasiana in Poreč: g) as depicted in an early eleventh-century fresco in the Transfiguration cathedral at Chernihiv, the capital of the homonymous oblast in Ukraine: 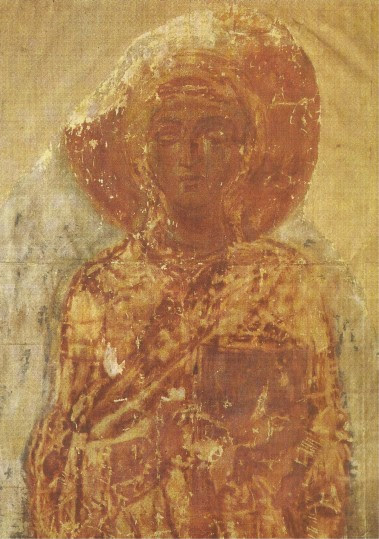 h) as depicted in the earlier eleventh-century mosaics (restored betw. 1953 and 1962) in the narthex of the church of the Theotokos in the monastery of Hosios Loukas near Distomo in Phokis: 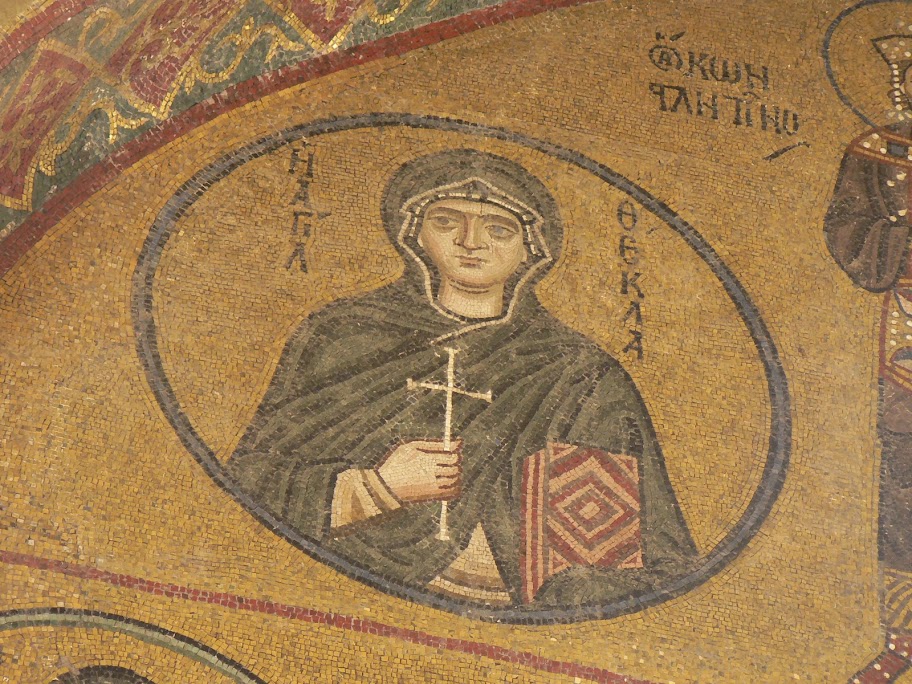 i) as depicted (between a male ?lion and a female lion) in an illuminated eleventh- or twelfth-century copy of the September portion of the Metaphrastic Menologion (London, BL, MS Add 11870, fol. 174v):
http://www.bl.uk/manuscripts/Viewer.aspx?ref=add_ms_11870_f174v

j) as depicted in the mid- to slightly later twelfth-century mosaics of the Cappella Palatina in Palermo:

k) as portrayed in stucco (at centre in the group at left) on the late twelfth-century ciborium in the basilica di Sant'Ambrogio in Milan: 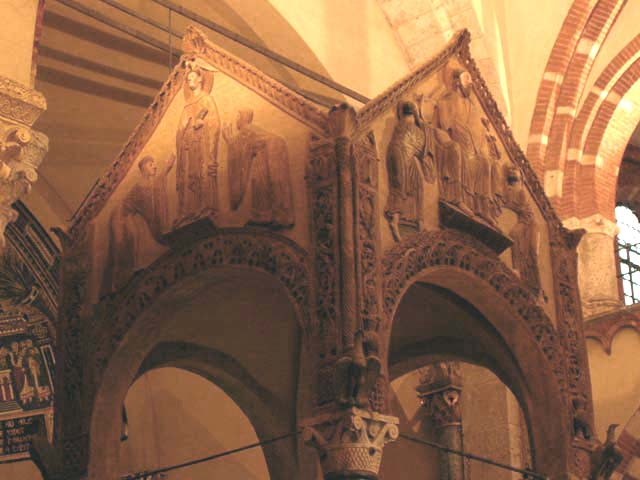 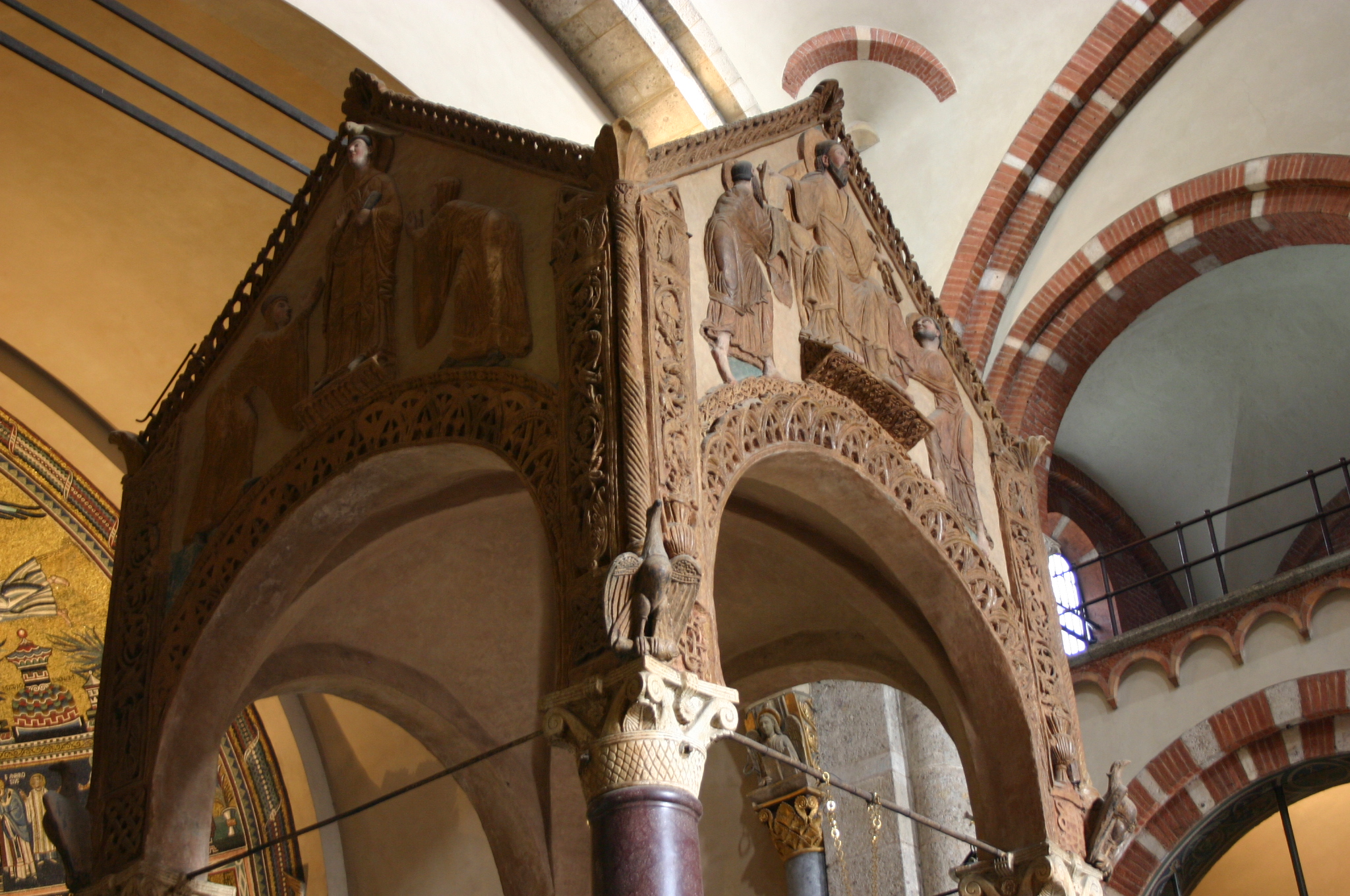 l) as portrayed (in glory and scenes from her life, to be read starting from upper left) on the earlier thirteenth-century marble frontal of the main altar in the catedral basílica metropolitana i primada de Santa Maria in Tarragona:

m) as portrayed in a late thirteenth-century silver gilt reliquary bust (c. 1290-1300) formerly in the cathedral treasury of Basel and now in the Rijksmuseum, Amsterdam:
https://www.rijksmuseum.nl/nl/collectie/BK-16997

n) as depicted in a thirteenth- or fourteenth-century fresco in the narthex of the originally twelfth-century church of the Panagia Phorbiotissa at Asinou in the Republic of Cyprus:
http://tinyurl.com/2bjeerd

o) as depicted in a full-length portrait in the earlier fourteenth-century frescoes (between c. 1312 and 1321/1322) in the nave of the monastery church of the Theotokos at Gračanica in, depending on one's view of the matter, Serbia's province of Kosovo and Metohija or the Republic of Kosovo:
http://tinyurl.com/nlkb8d9
http://tinyurl.com/yedtkpy

p) as depicted (attacked and bitten by lions) in a September calendar scene in the earlier fourteenth-century frescoes (betw. ca. 1312 and 1321/1322) in the nave of the monastery church of the Theotokos at Gračanica in, depending on one's view of the matter, Serbia's province of Kosovo and Metohija or the Republic of Kosovo: 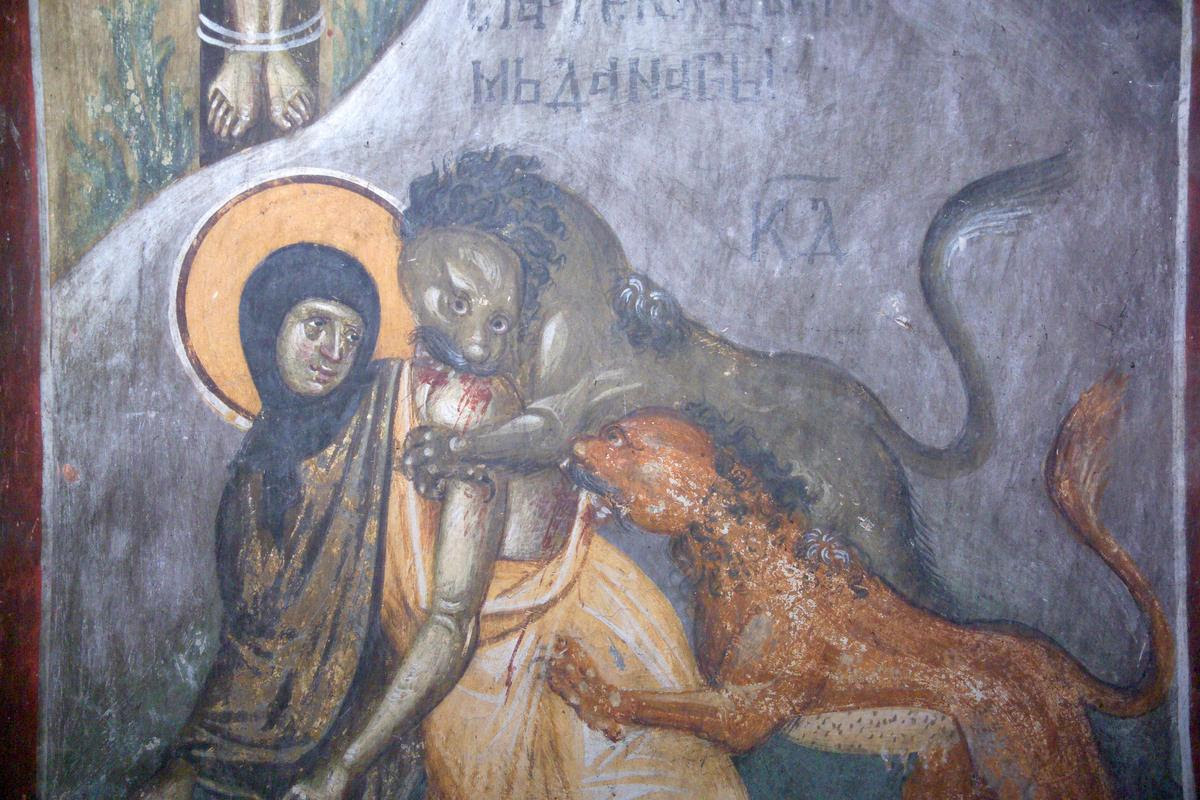 q) as depicted (in panel at lower left; escaping into the cleft) in an earlier fourteenth-century pictorial menologion from Thessaloniki (between 1322 and 1340; Oxford, Bodleian Library, MS Gr. th. f. 1, fol. 10v):

r) as depicted (praying for and receiving rain to extinguish the fire to which she had been sentenced) in an earlier fourteenth-century copy (ca. 1335) of books 9-16 of Vincent of Beauvais' Speculum historiale in its French-language version by Jean de Vignay (Paris, BnF, ms. Arsenal 5080, fol. 77r):
http://tinyurl.com/nqlhgdl

s) as depicted (escaping into the cleft) in a September calendar scene in the earlier fourteenth-century frescoes (betw. 1335 and 1350) in the narthex in the church of the Holy Ascension at the Visoki Dečani monastery near Peć in, depending on one's view of the matter, either the Republic of Kosovo or Serbia's province of Kosovo and Metohija:
http://tinyurl.com/ngn3d8j

w) as depicted (in a statue and, on the predella, in scenes of her life) by Pere Joan on the earlier fifteenth-century great altarpiece (between 1439 and 1445) in Tarragona's catedral basílica metropolitana i primada de Santa María:

1) The altarpiece (above the predella), with Thecla and Paul flanking the BVM and Christ Child:

2) Predella scenes, ending with the bishop and clergy of Tarragona receiving Thecla's arm extended from the cleft (their great relic of her): 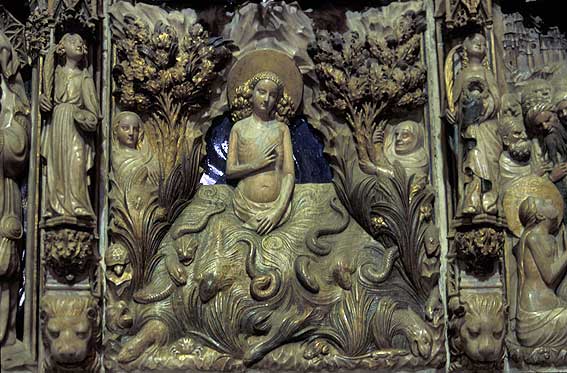 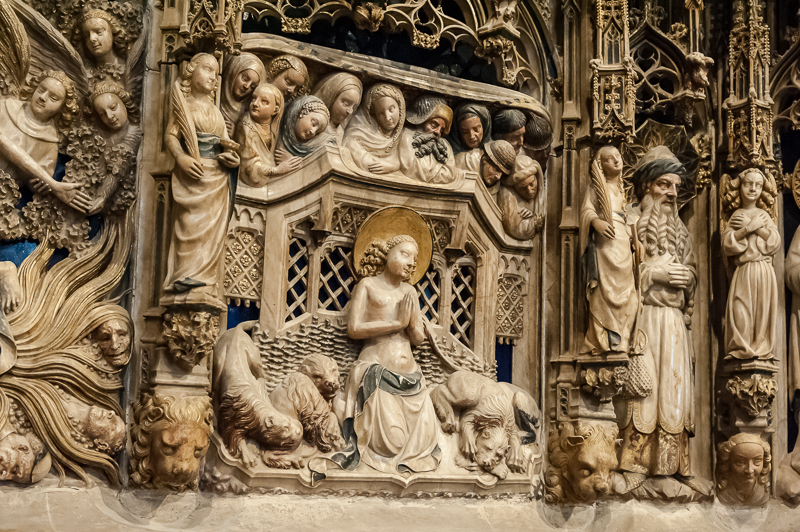 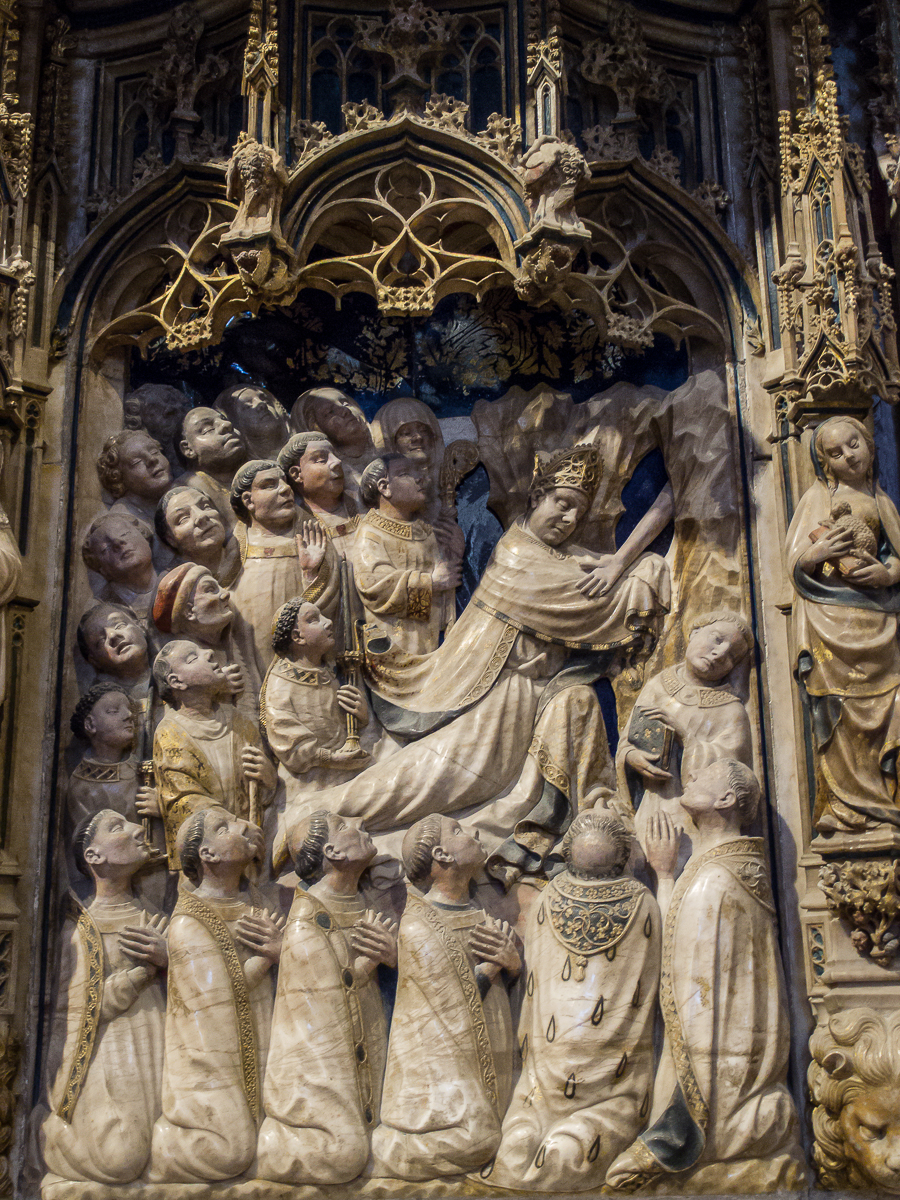 y) as depicted (at centre, holding two lions on a leash; at left: Sts. Victor and Mary Magdalene; at right: Sts. Barbara and Christopher) as depicted in a later fifteenth-century panel painting (ca. 1475-1485), from a dismembered altarpiece, in the diocesan museum in Freising:

z) as portrayed (holding symbols of her survival of attempted execution by fire and by wild beasts) in a late fifteenth- or early sixteenth-century polychromed wooden reliquary bust in the Princeton University Art Museum, Princeton (NJ):
http://artmuseum.princeton.edu/collections/objects/24576 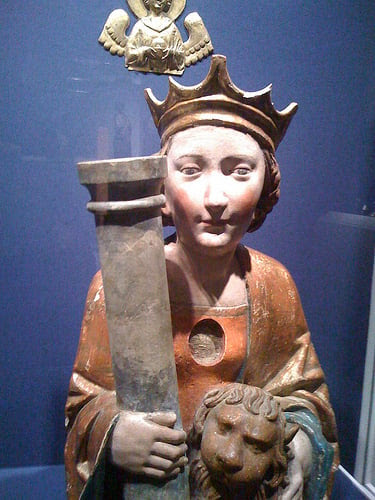 This is a good one..I always wanted to know more about my name