First Blessing from a Norbertine priest

Yesterday the Oxford Oratory welcomed as its celebrant and preacher at the 11am High Mass for the feast of SS Peter and Paul Fr Stephen Morrison, O.Præm.from  the Norbertine Priory in Chelmsford.

Fr Stephen preached on the gift of Romanitas that we have received as part of our Catholic heritage, including suggesting carbon-neutral methods of Papal transport - i.e. restore the Sede gestatoria.

After Mass, Fr Stephen gave first blessings to the congregation. 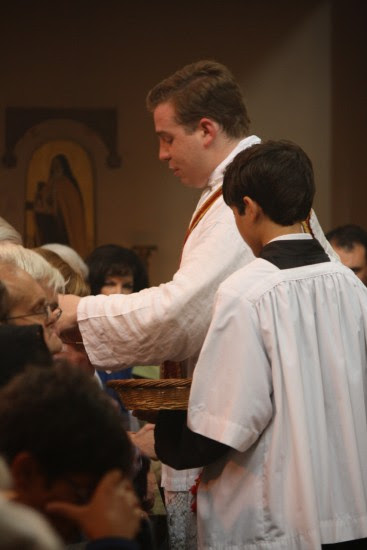 Fr Stephen was an undergraduate at Oriel College, where he read French and where I got to know him. in those years he was a regular attender at the Oratory. He joined the Norbertines when he finished in Oxford and was ordained priest last December on the feast of St Nicholas. 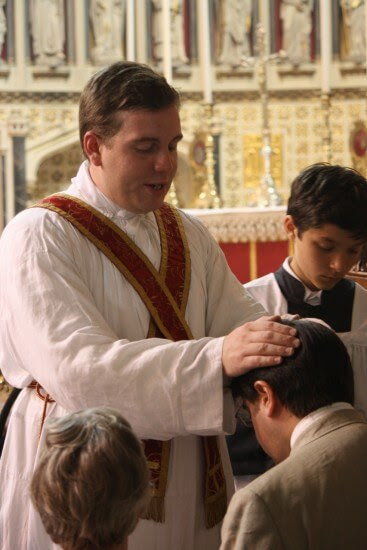 I was very disappointed last December not to be able to attend Fr Stephen's ordination, so it was a great pleasure not only to attend a Mass he celebrated but also to be able to receve one of his first blessings during his first year of priesthood.

Oxford and Cambridge in a day, not to mention London

Last week I was asked to give a tour of Oxford and of Cambridge on the same day. I had not heard of anyone doing such a tour before, but I was willing to give it a go. The group was a Malaysian family who were staying in London and who travelled up to Oxford for mid-morning last Saturday.

The Oxford tour was a fairly standard one, but unfortunately more than a usual number of colleges were closed on what was a very busy day with tourists.

After a light lunch in the Covered Market - always good value and fun - we went off on their very comfortable mini-coach to Cambridge. Given that this is a notoriously awkward journey the driver made good time and we were there in two hours (it is 3 hours 40 minutes on the usual coach service).

We were dropped off on the Backs, and made our way through Trinity and Trinity Lane to the city centre. I have shown friends around Cambridge before, but this was the first time I have taken a party round, and, though I say so myself, I think it went well. We worked down from St John's and Trinity to the Senate House, where we had the bonus of a Degree day ceremony to see forming up outside, before taking on Great St Mary's, King's, St Catherine's, Corpus Christi, Queen's and distant views of Pembroke, Peterhouse and the Fitzwilliam before heading back to the coach. Cambridge seemed just as busy as Oxford, but the weather was fine, and the mood relaxed with many punts on the Cam. I think my group enjoyed the experience.

We then set off to London, the plan being to drop me off to get transport back to Oxford. Coming on from the Essex side - which is surprisingly wooded alongside the M11 - we got a distant view of the modern skyline of London - Canary Wharf, the Shard, the Green Gherkin, the Nat West tower et al. as we drove in I saw parts of the capital I knew hitherto only as names.

The first surprise was a medieval parish church wedged between modern roads. This was Bow church - not the church of Bow bells I should add - and from the parish of Straford atte Bow mentioned by Chaucer in the Canterbury Tales. There is an online account of it at Bow Church.

We passed through Mile End, with shades of the young King Richard II negotiating with the Essex rebels here in 1381. This led on to Whitechapel, the sinister territory of Jack the Ripper. Arriving at the Tower I was on more familiar territory as we went through the City, only to be held up by the current roadworks on the Embankment as we approached Westminster. I was most conveniently dropped off by the coach stop for Oxford, arriving back at 10.30, almost exactly twelve hours after we began.

I suppose Oxford and Cambridge in one day may be slightly unusual combination, but I was pleased to find that such a tour was indeed possible and enjoyable.

The Wittelsbachs and the Second World War

The Special Correspondent has been looking at a Jacobite website and found this very interesting account of the Wittelsbachs' experience of the Second World War which can be read athttp://www.jacobite.ca/essays/ww2.htm

This is in a number of ways very similar to the experience of the Habsburgs in the same period and which was discussed in a recent post by the Mad Monarchist.

Whether you regard the dynasty as merely the Bavarian Royal Family or as the "other" or even "true" British Royal Family is irrelevant to the interest of the post.

Today is the anniversary of the martyrdom on Tower Hill of St John Fisher 480 years ago.

Stephanie Mann had a post the other day about the Bishop's trial with 480 Years Ago Today: The Trial of St. John Fisher
Her always intersting blog Supremacy and Survival: The English Reformation has had a series of posts in recent weeks on the martyrdoms of 1535 of the Carthusians and their companions, and she is now moving on to the more famous victims of that year, Fisher and More.


It is the latter who is more widely known by both Catholic and non-Catholic. It has only been in recent years that more scholarly attention has been paid to John Fisher, with books by academics such as Dr Richard Rex with his volume The Theology of John Fisher.

An excellent book on Fisher, and a very useful introduction to him is Saint John Fisher by Cardinal Vincent Nichols. This was published as a  book in 2011, but originated with a Master's thesis by the now-Cardinal in the 1960s.

Two recent posts worth drawing the attention of readers to on the blogs which I try to find time to read are, firstly, from The Mad Monarchist. This looks at the Austrian Imperial family and their fortunes, not least the possibilities of restoration to the throne, in the years before the Second World War and their situation afterwards. An informative and interesting piece it can be read at The House of Hapsburg in World War II

Secondly, the ever trenchant Rorate Coeli has an interview with Alice von Hilderbrand about her late husband's dismay at what happened during Vartican II. Whether you agree with it all or partially or not at all, it is an interesting piece about how one should, or might, understand the pontificate of Pope Paul VI. It can be read at 50 Years Ago: Dietrich von Hildebrand Confronts Pope Paul VI

Today is the modern feast day of St Alban, the proto-martyr of Britain. There contines to be academic debate as to whether he is early or late third century in date.

To these John Dillon added the following:

A few further images of Alban of England, who in addition to his celebration on 20th June in the Church of England and in other churches of the Anglican Communion has an optional celebration on this day in the (Roman) Catholic Church of England and Wales. In the Roman Martyrology and in the calendars of some smaller Western-rite churches his commemoration falls on 22nd June. Alban of Mainz (conceivably Alban of England transformed by a distinct, later-appearing hagiography) is celebrated on 21st June in Roman Catholic dioceses in Belgium, Luxembourg, western and southern Germany, and Switzerland.

c) Scenes from a Life of Alban and Amphibalus as depicted by Matthew Paris in another earlier fourteenth-century manuscript (Dublin, Trinity College, Ms E.I.40., fols. 77 ff.) - the images are expandable:
http://tinyurl.com/pwk2t4e 
Reproduced by kind permission of The Board of Trinity College Dublin.

Gordon Plumb also posted about St Amphibalus who was the fugitive priest who took refuge with St Alban (the name Amphibalus means 'cloak', referring to the priestly garment which Alban donned in his stead). His feast day is June 25th.

Illustration of the martyrdom of St Amphibalus, from life of St Alban in Trinity College, Dublin, MS. 177 (formerly E.I.40). 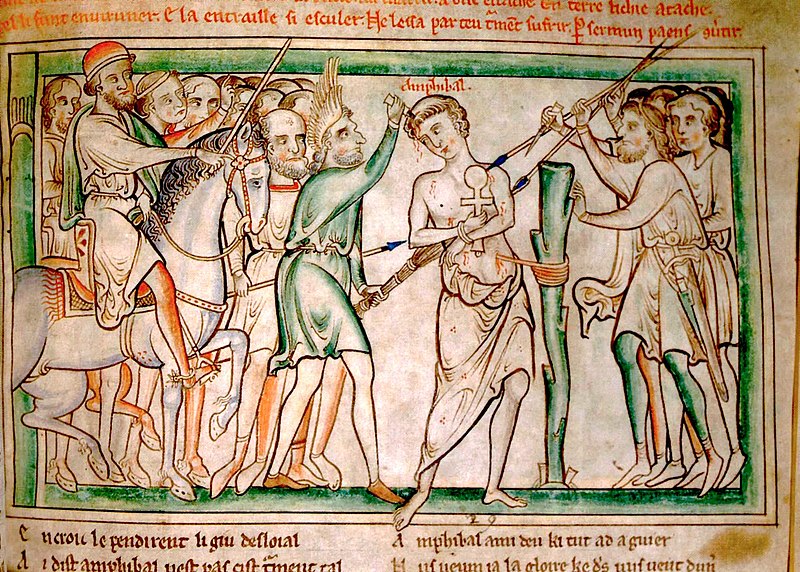 There is a collotype facsimile of this manuscript:
Illustrations to the Life of St Alban in Trin. Coll. Dublin MS. E.i.40, Reproduced in Collotype Facsimile by the Care of W.R.L. Lowe & E.F. Jacob, with a Description of the Illustrations by M.R. James. Oxford, at the Clarendon Press, 1924.