Today is the 150th anniversary of the birth of King George Vin 1865. The view of him as a rather unimaginative blunt naval officer may describe his personality in part but iyt misses, I think, one which has not had as much consideration as it perhaps deserves. This was something which came to my mind whilst giving acourse of tutorials last year to a visiting American student of the history of the Britiush Monarchy in the twentieth century.

The point at issue was the extent to which the King, far more than his father, the more flamboyant, socialising and widely travelled King Edward VII, was responsible for developing the outward ceremonial of the monarchy, and expecially in the first four years of his reign between 1910 and 1914.

This can be seen with the Coronation in June 1911. Unlike his father's somewhat shambolic coronation the ceremony was rehearsed and for the first time for several such ceremonies the King actually wore St Edward's Crown, though not for as long as his son and granddaughter were to do at their coronations.

Instead of hiring in precious stones for the occasion to decorate crown it was permanently set with precious and semi-precious stones and displayed with them ever since.

In the following month there was the Investiture of the Prince of Wales at Caernarvon on 13 July - the first such ceremony since that of Henry Prince of Wales in the reign of King James I. That Caernarvon was the constituency of the Chancellor of the Exchequer, David Lloyd George, may not be irrelevant. New insignia was made and a very public ceremony held, as can be seen in the pictures at The Investiture - 13th. July 1911 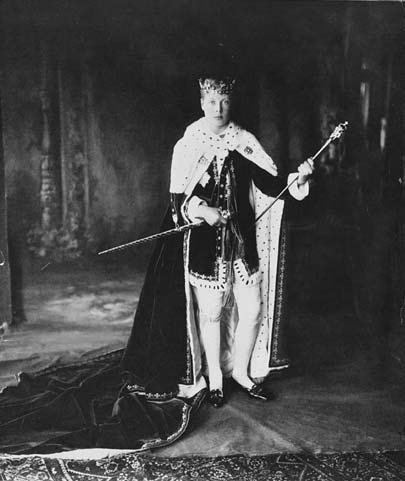 Edward Prince of Wales in 1911 following his Investiture

This was followed by the Coronation Durbar in India on December 12th. Not only was this the first - indeed only time - the British Emptess or Emperor of India attended such a celebration, but it was carried out with enhanced ceremony. As a British crown count not be taken out of the realm under the Act of Settlement a new crown was made, taken to India for the occasion and returned to London. It was the King-Emperor who ruled that it was not, as had been suggested, to be broken up afterwards but to go on display at the Tower alongside the other Vcrown Jewels. It was made by Garrards between March and October 1911, together with a new tiara for the Queen-Empress -it is now worn, after long dissuitude by the Duchess of Cornwall. At the Durbar, and despite the intense heat, King George V and Queen Mary wore full Coronation robes at the ceremony, together with the new crown. The King later wrote in his diary "Rather tired after wearing the Crown for 3 1/2 hours, it hurt my head, as it is pretty heavy...".


Notwithstanding the difficulties of wearing a crown upon his return and from 1913 until his death, the King, unlike his father, actually wore the Imperial State Crown at the annual State Opening of Parliament

As David  Starkey points out in his history of the monarchy this necessiated various adjustments over the years to the frame to try and make the crown more comfortable for the monarch to wear.


Similarly in these years the King presided at Garter processions at Windsor, although they did not take on a definitive annual form until the 600th anniversary of the Order in 1948. For the Order of the Bath with its chapel in King Henry VII's Chapel at Westminster ceremonial investitures were revived in 1913. The reign began with the building of the Thistle Chapel at St Giles in Edinburgh in 1910-11. Such a scheme had been talked of from the 1880s, beginning with a plan to restore the ruined nave at Holyrood. Now a new chapel was built, the first for the Order of the Thistle since 1688. King Edward VII had inaugurated the Chapel of the Order of St Michael and St George in St Paul's Cathedral a few years earlier, but this wasa more ambitious and much more public undertaking.

There appears to be a clear pattern in all this, and it must be one that was coming from the King himself and circle around him - carring further what his father had done - not quite what might expect from a King often thought to be rather diffident - certainly at this point in his reign with the major constitutional issues of the House of Lords and Irish Home Rule so prominent. They can be seen as balancing the regional tours the King and Queen carried out in those pre-war years.

Writing in exile in the early 1920s the king's cousin, Emperor Wilhelm II commented with reference to the ceremonial around the unveiling just before the Coronation in June 1911 by the two monarchs of the Queen Victoria Memorial that monarchies with less direct power were, the Kaiser thought, more inclined to the use of public spectacle and ceremony. That is an interesting insight from an insider - though few modern monarchs have been as keen on outward ceremony as Wilhelm, and he, presumably, was implying he had more direct power than his cousin George.

That this concern for historic ceremonial was not just a pre-War mood can be seen in the revival by King George V of the monarch's personal participation in the Royal Maundyservice in the early 1930s, at the suggestion of his cousin Princess Marie Louise.