A day in Hereford

Yesterday I joined a party from the Oxford Oratory for a day at Hereford Cathedral. I am very fond of it as a cathedral, and it is one which is, undeservedly, not as well known or visited as it should be. Quite a few of the party yeasterday had not been their previously. These days it offers a lot for the visitor and pilgrim.

I have adapted the  post on the Oratory website, adding to it more comments and information for this piece. 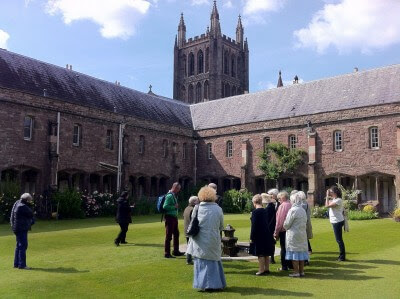 The Wednesday Morning Group and others in the cloister of the Vicars Choral.

The coach ride over to Herefordshire took us through some beautiful scenery, with lush foliage lining the roads, and sweeping views over the Cotswolds, Severn valley and Malvern Hills.

Hereford Cathedral is noted for the shrines of St Ethelbert, King of the East Anglia, who was murdered near Hereford by King Offa of Mercia in 794 AD, and St Thomas Cantilupe (sometime Chancellor of Oxford University) who died in 1282. Both of these shrines have been restored in recent years under the leadership of the Dean.

We had coffee on arrival, lunch and then afternoon tea in the Hall of the former College of the Vicars Choral - this was only dissolved as an institution in 1937 as part of the revision of the cathedral statutes. The buildings date from 1475, when the Vicars were given a residence in the Close, rather than running the hazards of walking from Castle Street late at night. The former Chapel can still be seen, as well as the Hall, whaich has been extended and modified over succeeding centuries. 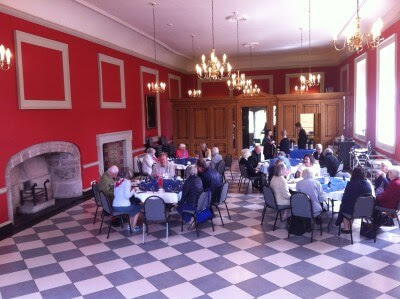 The Oxford pilgrims in the Hall of the Vicars Choral

We were divided into two groups so as to have a tour of the cathedral or to visit the exhibition which includes the Mappa Mundi, of circa 1300, a copy of the writ from King John accompanying the 1215 Magna Carta (the original writ is unique and onshow at the Bristish Librray exhibition this summer), a copy of the 1217 reissue of Magna Carta - considered the best surviving example - and the Chained Library, which, it was noted, houses three editions of the Annals of the Christian Church by Cardinal Baronius of the Roman Oratory. The Chained Library was installed in the late sixteenth century in the disused Lady Chapel, removed from there in the nineteenth century restoration and only finally and fully reassembled in 1996 in the new Mappa Mundi centre. It was only in those years that the original frame of the Mappa Mundi was rediscovered in a cellar - a remarkable story of survival.


Before lunch, we were able to go to Holy Mass at the Catholic church of St Francis Xavier, in Broad Street, just next to the Cathedral. 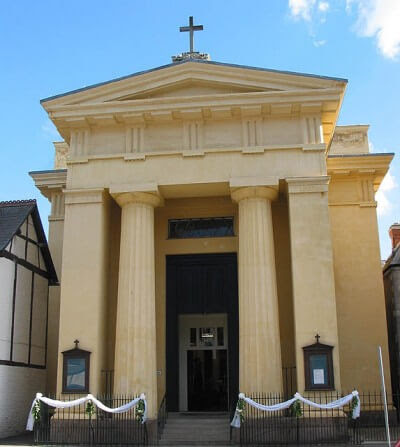 St Francis Xavier is a magnificent church, splendidly restored in recent years. Originally built by the Jesuits and opened in 1839  it has been since the 1850s in the care of the Benedictines of Belmont Abbey, which is on the western edge of the city. Dom Michael Evans, O.S.B. was most gracious in his welcome, as were his enthusiastic parishioners, who clearly have a great love for their beautiful, well-restored church. It is evident that it is open as an important act of witness in the centre of the city - they too had recently held a Corpus Christi procession through the city centre. There is more about the church at St Francis Xavier Church, Hereford

Here are some of our group, after Mass: 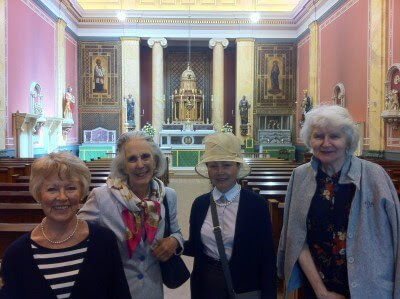 To the right of the High Altar is the relic of St John Kemble, a local martyr who ministered as a priest in Herefordshire and Monmouthshire for over fifty years, before being arrested on false charges during the Popish Plot and executed on nearby Widemarsh Common on 22 August 1679. there is more about him online at  St John Kemble . A Catholic woman managed to catch his left arm as it fell from the gallows when he was quartered, and it is this relic which is preserved at St Francis Xavier. The relic is believed to have worked miracles, down to our own time. 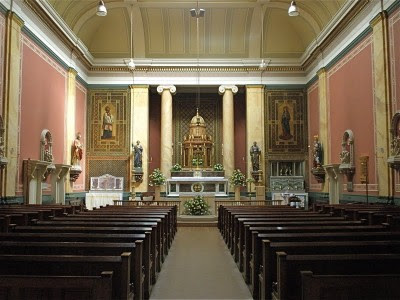 After lunch we had had the second part of our tour, either of the cathedral or the Mappa Mundi-Magna carta exhibition and then a tour of the lovely gardens, which was a great treat - especially to see the gardens of the Bishop's Palace and the Deanery. 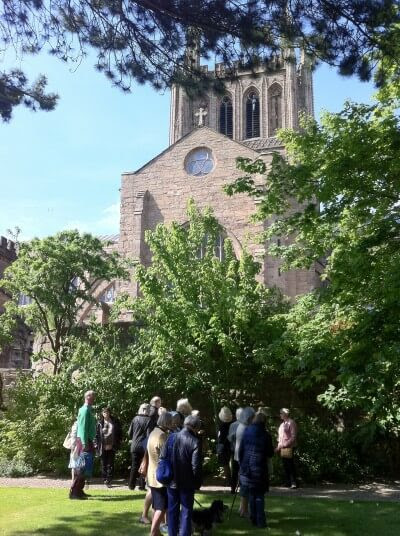 The wall behind the party is all that survives of the handsome twelfth century Bishop's chapel, "taken down" in the mid-eighteenth century - which was a bad century for the cathedral with the demolition of the remains of the late fourteenth century Chapter House in 1779, and the collapse of the west end in 1786, and the consequent disastrous "restoration" by James Wyatt, who also remocved the spire from the central tower. 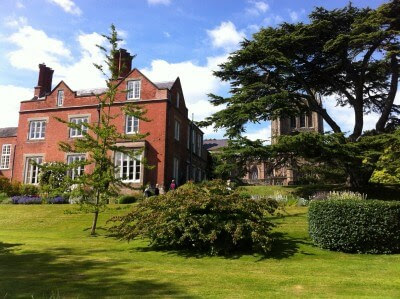 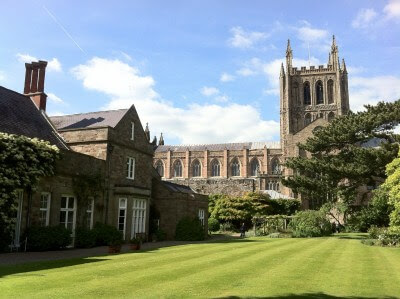 Two views in the gardens of the Bishop's Palace

After tea we attended said Evensong in the Lady Chapel. We were warmly welcomed by the Dean, The Very Reverend Michael Tavinor, and other members of the Cathedral community. Afterwards I spoke with the dean, whom i knew slightly when he was Vicar of Tewkesbury and where i spent several Christmas- New Year and summer breaks

Our journey back to Oxford was in wonderful in summer evening sunshine, which enabled one to appreciate the countryside of Herefordshire and Gloucestershire.

this was an excelelnt day out,  and quite a tonic, with plenty to see and think about historically, as well as being amongst friends. Hereford cathedral offers an excellent welcome and plenty to do, and is well worth a visit.

Images: Oxford oratory website
Posted by Once I Was A Clever Boy at 20:42