Today is the 220th anniversary of the death in the Temple of King Louis XVII of France. 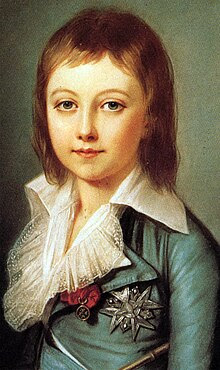 A portrait by Alexander Kucharsky

He was a victim of the Revolution as much as his parents - indeed more so, being  only a child. He appears as a sweet natured boy in accounts from the Constitutional period when he was known as the Prince Royal rather than as the Dauphin.

There is an online account of his life and death, and of the spurious claimants to being him here.

In recent years what was  beleived to be his heart has been shown to be genuine by DNA tests and taht has now been interred at St Denis.

As a friend of mine has opined what sort of regime is it that is based upon the systematic abuse and deathof a child as unfortunate as King Louis XVII.