Last Thursday, September 24th, was the Feast of Our Lady of Walsingham. As someone who both as an Anglican and as a Catholic has been there many times on day or week Pilgrimages or the Anglican National Pilgrimage - at which event I was once crucifer when Pusey House provided the serving team - I am delighted that it now merits its own specific place in the calendar under the Walsingham title.

In the afternoon I attended a book launch at Blackfriars of a new book on the origins of the shrine, entitled Edith the Fair and published by Gracewing, it was written by Bill Flint, who died last year. The launch was by his widow and daughter, and followed on from one at Walsingham itself a while ago. Bill Flint set himself to uncover identity of the figure normally known as Richeldis. His conclusion is that the visionary/foundress was Edith the Fair, the wife of King Harold II, who was the lady of the manor before the 1066 invasion, and would have been in the traditional date of foundation, 1061.


I bought a copy of the book and read it over the following two days. The basic argument, using Domesday and will and charter evidence, is appealing, and resolves questions as to the date and origin. Flint also gives in its complete form, and with a modern transliteration the Pynson ballad text, which first appeared about 1490. This is useful for anyone else interested in unravelling the story of Walsingham. He has interesting things to say about the symbolism of the statue.

It is clear that Bill Flint loved Walsingham - it is indeed a lovable place - and sought to make an offering to Our Lady by his work.

That said I feel I must add that I think the book would have benefited by both stylistic copy-editing to avoid its tendency to restate its argument and to set out the case being made more clearly. I think it also needed editing by or with a historian who could have avoided unnecessary errors and enhanced the understanding of the period under consideration.

I was surprised that no use was made of the archaeological evidence - easily available in print in a booklet on sale, so far as I know to this day in Walsingham - which points to the original Holy House having been built of split tree trunks, like the surviving Anglo-Saxon nave at Greensted in Essex. Excavations revealed that the paving of the late medieval enclosing New Work , built to protect the original chapel, fitted around an inner wall with a distinctive scalloped profile. 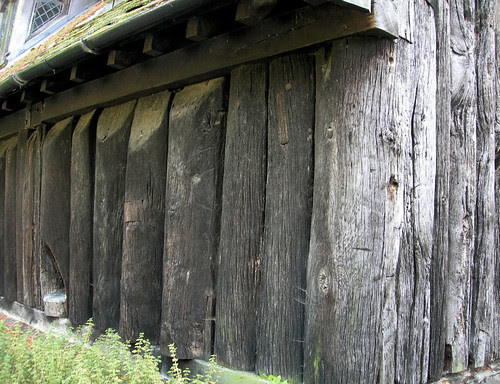 
That would reinforce a pre-Conquest date rather than a mid-twelfth century one for the foundation and building, and confirm the references in the Pynson ballad to carpenters working on the original chapel.

This evening I attended the transferred feast day Sung Mass of Our Lady of Walsingham offered by the Ordinariate at Holy Rood here in Oxford. As with so many pilgrimages to Walsingham this was a good occasion to meet up with friends, and to give thanks for the message and reality of Walsingham. it also reminded me that it is a while since I was there and that I ought to go again.


Our Lady of Walsingham, pray for us.