Today, September 19th, is the feast day of Januarius of Naples (d. 305, supposedly; also Januarius of Benevento; in Italian, Gennaro). Neapolitan veneration of this well known saint is at least as old as the fifth century. A letter of ca. 432 narrating the death of St. Paulinus of Nola has two saints appear to him on his deathbed: Martin and Januarius, the latter described as a martyr bishop who illumines the church of Naples. Herewith two images of him (the first is certain, the other very probable) in that city's catacombe di San Gennaro:
1) as depicted (at centre, in an apparent visual instance of the trope of the martyr as Christ) in a fifth-century fresco:

2) as depicted (at left) in a probably early sixth-century fresco:
http://tinyurl.com/pdug9rh
Detail view:

A Januarius not identified geographically is entered under today in the early sixth-century Calendar of Carthage as well as in numerous liturgical sources from the seventh century onward, including the earlier ninth-century Marble Calendar of Naples. The (pseudo-)Hieronymian Martyrology has an entry under this day for a Neapolitan Januarius as follows: et Neapoli sanctorum Ianuari et Angi. ("and at Naples, of saints Januarius and Angi."). Who or what Angi. may have denoted is unknown.

Januarius' developed legend emerges in his Acta Bononiensia (BHL 4132, now dated to before the eighth century) in which he is identified with the Januarius of Benevento entered under September 7th in the (ps.-)HM along with Sts. Festus, Acutius, and Desiderius. This account presents him as a bishop of Benevento and names the others among his several companions in martyrdom during the Great Persecution; all are said to have been put to death near the Solfatara in the Phlegraean Fields near Pozzuoli. By the eighth century too a martyrial church had been erected at that reported place of execution. An altar thought to have come from that church is preserved in its modern successor, the chiesa di San Gennaro alla Solfatara at today's Pozzuoli (NA) in Campania:
http://www.incampania.com/assets/img/Beni/big/santuariosangennaro.jpg

In the ninth-century historical martyrologies and, in somewhat greater detail, in a translation account (BHL 4116) whose earliest witness is of the ninth century, the remains of various of Januarius' companions are said to have been removed at some unspecified time(s) to their home towns while those of Januarius are said to have been brought to Naples by people of that city. According to the ninth-century early portion of Naples' episcopal chronicle, this translation was the work of Naples' bishop St. John I (d. 432), who placed the saint's body in extramural catacombs since known as those of St. Januarius. Some views of Naples' catacombe di San Gennaro as they are today:
http://s208.photobucket.com/user/lukebdb/media/napoli1.jpg.html
http://www.flickr.com/photos/10032652@N08/4464724728/
http://www.italiaunica.it/wp-content/uploads/2014/03/NAPOLI_29.jpg
And a brief video:
https://www.youtube.com/watch?v=HYbiRT4Z-rQ

In the early ninth century a Lombard raid on Naples under prince Sico (d. 832) resulted in the translation to Benevento of the Januarian relics that had been in the Neapolitan catacomb church now known as San Gennaro extra moenia. Thus "repatriated" to the city of his legendary episcopacy, Januarius spent the rest of the early Middle Ages at Benevento and most of the later Middle Ages at the also Campanian abbey of Montevergine near today's Mercogliano (AV), whither he is said to been translated in 1154 at the behest of King William I. In 1480 remains identified through an inscription on the clay vessel containing them as those of Januarius and of his Beneventan companions Festus and Desiderius were discovered at Montevergine under the main altar of the abbey church. Those said to be Januarius' were translated in 1497 by Cardinal Oliviero Carafa to Naples, where they were deposited in a splendid crypt built for them in the cathedral of Santa Maria Assunta. Completed only in 1506, this crypt is now generally known as the cappella del Succorpo. Some views (the kneeling figure portrays Cardinal Carafa at prayer): The bones (really, bone fragments) translated from Montevergine in 1497 are displayed in the container in the altar and which is shown in close up here:
http://oodegr.co/italiano/tradizione_index/vitesanti/reliquie%20s.%20gennaro.JPG
http://tinyurl.com/nfrgypu

By then the church of Naples possessed other relics of Januarius that supposedly had remained in the city all along: a portion of skull housed in a silver gilt head reliquary from the early fourteenth century and two tiny glass ampules containing a brownish-red substance that many believe to be some of Januarius' blood preserved from the scene of his martyrdom and whose famous liquefaction (now usually occurring today and again in early May) is first recorded from 1389 in a chronicle entry for August 17th.
The head reliquary (the base is from 1609): 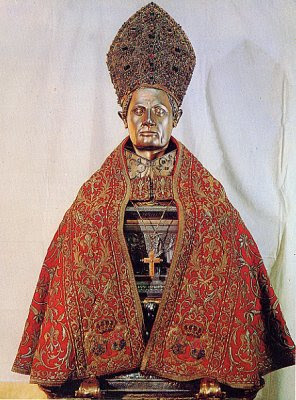 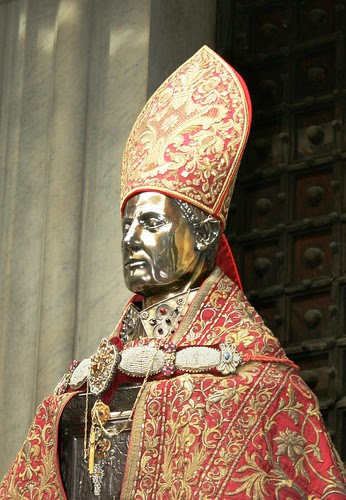 Three views (the first two antedating the restoration of 2008) of the processional display reliquary for the ampules (the central portion with its bust of Januarius dates from the fourteenth century):

There is a less good image at  http://tinyurl.com/27j6za and a detail here: 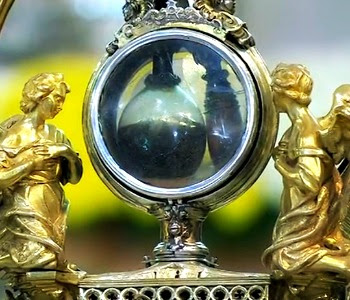 and in the hands of the Cardinal Archbishop:
http://tinyurl.com/pupar8c

A scientifically informed English-language critique of the marvel of Januarius' supposed blood:
http://www.cicap.org/new/articolo.php?id=101014
You can now get an app for your iPhone enabling you to experience the miracle at times of your own choosing:
http://www.napolitoday.it/cronaca/isangennaro-app.html

http://tinyurl.com/ow7bt5t
The lions represent an episode in Januarius' Passiones in which they become submissive when he is exposed to them in the amphitheater of Pozzuoli. Only after that method of execution fails are he and his companions taken to the Phlegraean Fields.

b) as depicted in a late eleventh- or early twelfth-century roundel in the chiesa di Sant'Aniello at Quindici (AV) in Campania:

The roundels depict Januarius and his traditional companions in martyrdom. Expandable views of the entire composition are here:
http://www.moschiano.net/Quindici/Quindici_Affreschi.htm

c) as depicted in a twelfth- or thirteenth-century fresco in what's left of the rupestrian cripta / chiesa di San Gennaro al Bradano in Matera (MT) in Basilicata:
https://adonisannua.files.wordpress.com/2008/01/img_0700.jpg

d) as portrayed (with a base depicting in inlay the two ampules of the saint's supposed blood) in an early fourteenth-century marble bust in the chiesa di San Gennaro alla Solfatara in Pozzuoli:

e) as depicted (at right; at left, St. Athanasius of Naples) as depicted by Pietro Cavallini (attrib.) in an early fourteenth-century fresco (between 1308 and 1320; abbreviated at right during eighteenth-century redecoration) in the cappella Tocco in Naples' cattedrale metropolitana di Santa Maria Assunta:

f) as depicted (at left; at right, St. Restituta of Africa [or of Teniza, or of Carthage]) in an earlier fourteenth-century mosaic (1322) by Lello da Orvieto in the cappella di Santa Maria del Principio in the Santa Restituta portion of Naples' cattedrale metropolitana di Santa Maria Assunta:

h) as portrayed (at far right, behind the kneeling cardinal Arrigo [Enrico] Minutolo) in an early fifteenth-century statue (1407) by Antonio Baboccio in the lunette of the central portal of the west facade of Naples' cattedrale metropolitana di Santa Maria Assunta:

http://tinyurl.com/qezwg2t
The central figure of the Madonna enthroned is a survivor from Tino da Camaino's earlier west facade of the later 1320s.

i) as portrayed in a late fifteenth-or early sixteenth-century copper gilt head reliquary with amoonstone inscribed with the saint's name of Italian origin in the Victoria and Albert Museum, London: 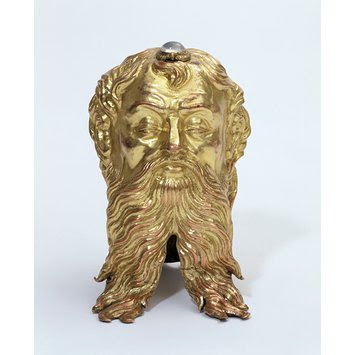 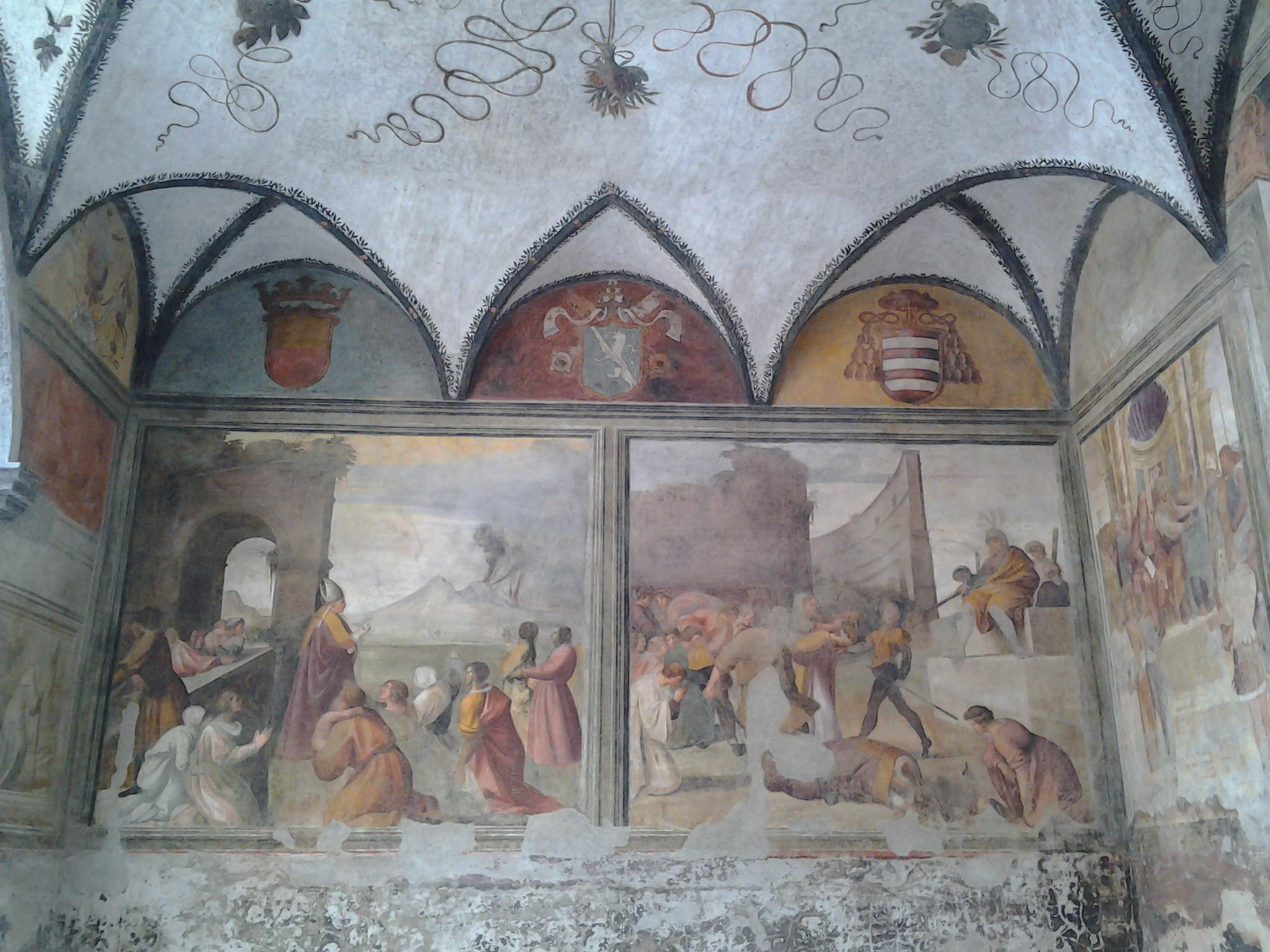 
To this I would add this piece from the blog of Fr Julian Cassar about the saint and the liquefaction of his blood, and posted in september 2012: 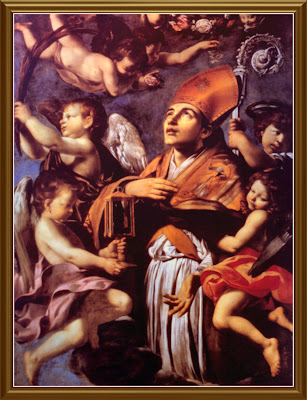 St. Januarius (Gennaro) is a patron saint of and former bishop of Naples in the 4th century. Januarius and his friends were initially sentenced to be eaten by the lions, tigers, and bears ( Oh my) at the Naples amphitheatre. Although the beasts had been starved for several days before the day of the planned transformation of the Christians into animal crackers, the beasts refused to attack Januarius and his colleagues. The spectators at the amphitheatre were frightened by the indifference of the starving animals to the Christians and rumors began to circulate that the Christians had magical powers and were possibly protected by their god. The governor of Campania ordered their immediate beheading and Januarius' body was later returned to the Cathedral in Naples.
Over a century later, it was purported that a vial of St. Januarius' blood surfaced and was preserved and permanently fixed in the metal reliquary in the Cathedral of Naples. Thousands of people assemble to witness this event in the cathedral of Naples, three times a year: on September 19 (Saint Januarius day, to commemorate his martyrdom), on December 16 (to celebrate his patronage of both Naples and of the archdiocese), and on the Saturday before the first Sunday of May (to commemorate the reunification of his relics).


Sometimes the "blood" liquefies immediately, other times it takes hours. When the priest brings the vial to the altar that holds the saint's blood, the people, who gather by the thousands, pray that the blood becomes liquid once again. If the miracle takes place, the officiant proclaims, "Il miracolo é fatto!" and waves a white handkerchief. Then a Te Deum is sung and the reliquary is taken to the altar rail so the faithful can kiss the vial. The priest conducting the service chants "The miracle has happened." The choir and the congregation respond with a Te Deum, and prayers are offered to St. Januarius. There have been a few instances when the substance in the vial had not liquefied and the faithful believes that it is a sign of impending peril. Five times when liquefaction has failed there have been major disasters, the latest being an earthquake in southern Italy that killed 3,000 people in 1980.


John Dillon concludes his note for today's feast with a PS:
The miracle did recur today. See:
http://www.ilmattino.it/NAPOLI/CRONACA/miracolo_di_san_gennaro_diretta_streaming_sul_mattino.it/notizie/1574114.shtml