Today is the feast of St Jerome.

He was born in Strido, in Dalmatia. He studied in Rome and was baptized there. He was attracted by the ascetic life and travelled to the East, where he was (unwillingly) ordained a priest. He was recalled to Rome to act as secretary to Pope Damasus, but on the Pope’s death he returned to the East, to Bethlehem, where (with the aid of St Paula and others) he founded a monastery, a hospice, and a school, and settled down to the most important work of his life, the translation of the Bible into Latin, a translation which, with some revisions, is still in use today. He wrote many works of his own, including letters and commentaries on Holy Scripture. When a time of troubles came upon the world, through barbarian invasions, and to the Church, through internal dissension, he helped the refugees and those in need. He died at Bethlehem.

John Dillon posted the following on the Medieval religion discussion group for September 28th the feast day of St Paula's daughter St Eustochium, and which includes images of SS Paula Eustochium and Jerome :

We know about Eustochium (d. 418 or 419) chiefly from the correspondence of St. Jerome. A younger daughter of St. Paula of Rome and her husband, the senator Toxotius, after her father's death in 379 she took part in her widowed mother's newly adopted ascetic lifestyle. A few years later, when both had come under Jerome's influence, Eustochium was in constant attendance at his lectures on Holy Scripture at the house of the matron Marcella. Jerome's Letter 22, on virginity, is addressed to her. In 385-386 Eustochium accompanied her mother on a pilgrimage to the Holy Land; for much of this tour they were accompanied by Jerome. In 386 the party settled in Bethlehem, where Paula founded a monastery for women plus a smaller men's house for Jerome and where she and Eustochium learned Hebrew and supported Jerome. The latter's translation of Kings is dedicated to both of them; his prefaces to Isaiah and to Ezechiel are addressed to Eustochium alone.

After Paula's death in 404 Eustochium took charge of the women's monastery in Bethlehem and continued to collaborate with Jerome until her own passing. In one of three letters in which Jerome recounts his sorrow at Eustochium's death, he calls her a "holy and venerable virgin of Christ" (Letter 151); in another (Letter 154) he again calls her "holy and venerable". Eustochium's cult is apparently late medieval in origin: absent from the martyrologies of the ninth century, she is included in Pietro de Natalibus' Catalogus sanctorum (ca. 1375) and is entered under today in an expanded Usuard written at Haguenau in 1412.

A view of what are shown as the tombs of Paula and Eustochium in the Church of the Nativity at Bethlehem: 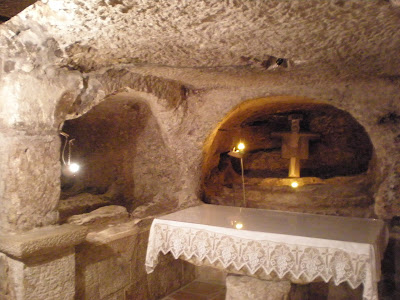 A few period-pertinent images of Eustochium of Bethlehem (the geographical suffix distinguishes her from Bl. Eustochium of Padua and from St. Eustochia Calafati, whose name in religion was Eustochium):

a) Eustochium and Paula as depicted (centre panel; receiving instruction from Jerome) in a full-page illumination in the ninth-century First Bible of Charles the Bald (Paris, BnF, ms. Latin 1, fol. 3v): 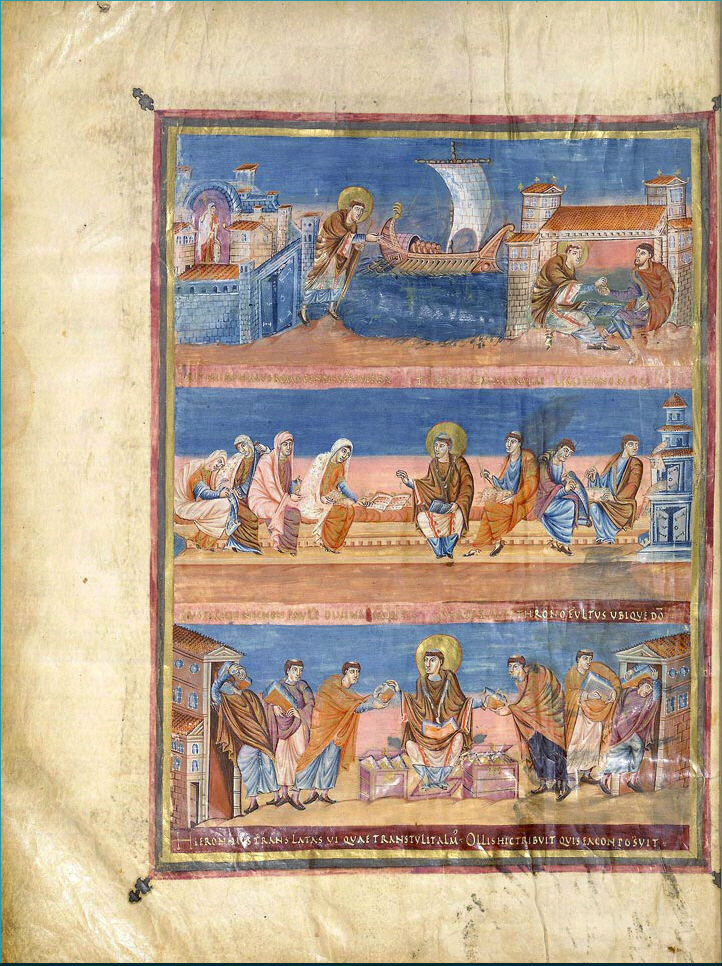 b) Eustochium as depicted (at right, receiving from Jerome, at left, a scroll bearing the incipit of Letter 273, addressed to her) in a late eleventh-century copy, from the abbey of Jumièges, of Jerome's commentary on Isaiah (to which this letter serves as preface) (c. 1090; Oxford, Bodleian Library, MS Bodl 717, fol. 6r): 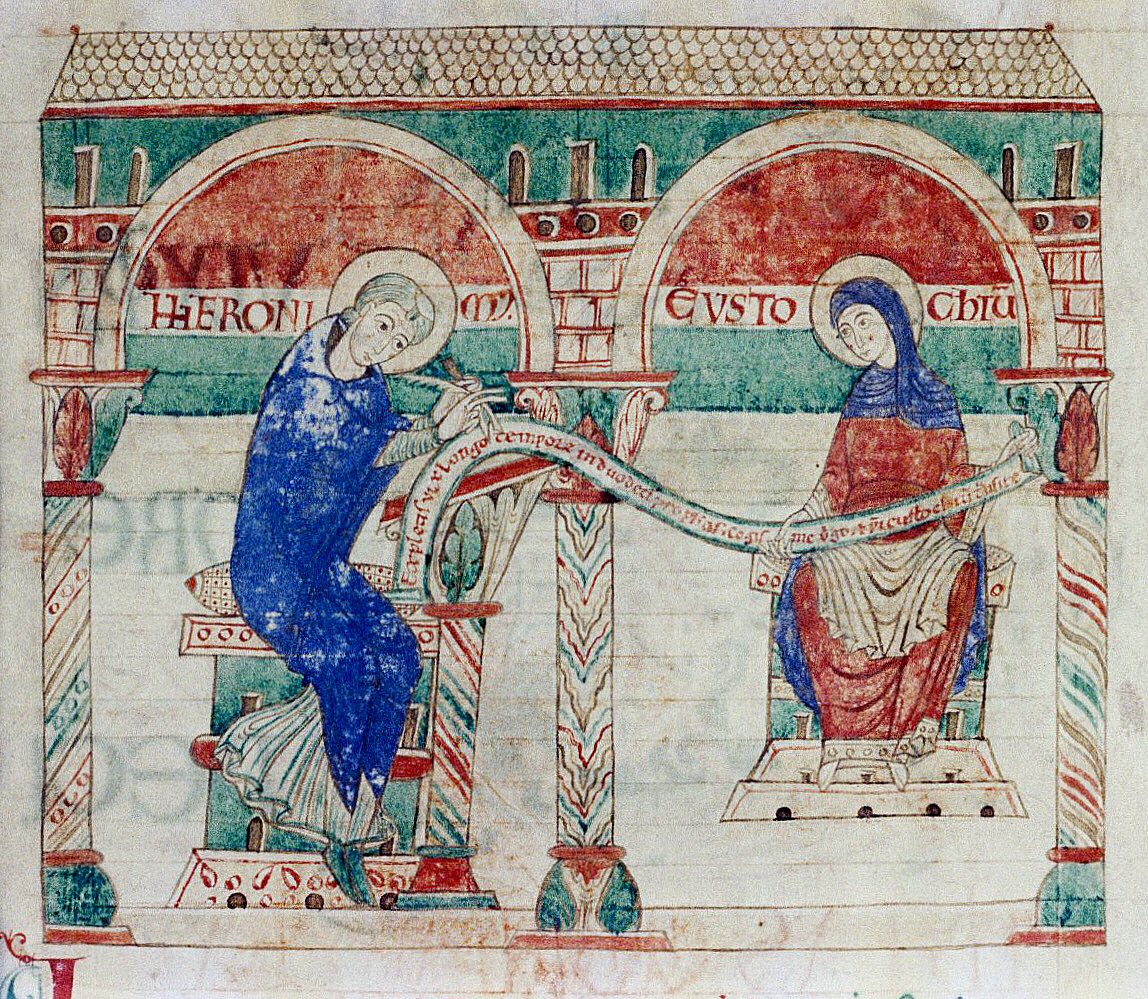 Letter 273 (in English and in Latin):
http://epistolae.ccnmtl.columbia.edu/letter/273.html

c) Eustochium as depicted by the Master of the Strauss Madonna in a late fourteenth- or early fifteenth-century panel painting (c. 1390-1420) in the Pinacoteca Vaticana:

d) Eustochium (at left, flanking Jerome's vision of the Trinity; at right, Paula) as depicted by Andrea del Castagno in an earlier fifteenth-century fresco (c. 1444-1445) in the chapel of Girolamo Corboli in Florence's chiesa della Santissima Annunziata: