John Dillon has posted on the Medieval  Religion discussion group about today's joint feast of SS Cornelius and Cyprian as follows ( slightly adapted):

Cornelius, Pope (d. 253) and Cyprian of Carthage (d. 258). Cornelius and Cyprian are named together in the Roman and the Ambrosian canons of the Mass. From at least the sixth century (and quite likely from some time in the earlier fourth century; see under CYPRIAN, below) until the beginning of the fifteenth century -- and perhaps later in some places that didn't get the memo -- their joint feast in the Roman Rite was celebrated on 14th September, also the feast day of the Exaltation of the Holy Cross. Since then it has fallen on 16th September, though editions of the Roman Martyrology, which began in the late sixteenth century, have continued to enter them under 14th September, their reported dies natalis in different years. Only with the revision of 1748 did the RM begin to carry a notice of the joint feast on 16th September.

I) CORNELIUS. Pope St. Fabian died in January 250 at the outset of the Decian persecution. For the next fourteen months the Roman church was governed by a collective of presbyters and deacons whose spokesman was the learned presbyter Novatian. In March 251 a new bishop of Rome was elected and the choice fell not to Novatian but rather to the presbyter Cornelius. Novatian's supporters refused to accept this and instead had their candidate consecrated by three south Italian bishops. Opinions differ as to whether there were at this time any difference between the two on the treatment of apostates who now wished to return to the Church. But the schism, if had not turned on this point from the outset, soon came to be defined in this light, with the Novatianists refusing re-admittance, and Cornelius and his supporters, who in time came to include bishops St. Cyprian of Carthage and Dionysius of Alexandria, opting for re-admittance after penance.

In 252, under Trebonianus Gallus and Volusianus (who otherwise are not known to have persecuted), Cornelius was arrested and relegated as a prisoner to Centumcellae (today's Civitavecchia [RM]). Cyprian of Carthage's letter to him after this arrest makes it plain that Cornelius alone had been singled out for repression and imagines him as leading the way to glory (_Ep._ 60: dum praecedis ad gloriam). The catalogue of Rome's bishops from Peter onward provided a century later by the Chronographer of 354 (the so-called Liberian Catalogue) says that after a pontificate of two years, three months, and ten days Cornelius passed away at Centumcellae with glory (ibi cum gloria dormitionem accepit); the phrasing does not suggest a death by execution. The Chronographer's less than exhaustive Depositio martyrum omits him. In about 380 St. Jerome in his version of Eusebius' Chronicle treats Cornelius a martyr.

Until its revision of 2001 the Roman Martyrology included in its elogium of Cornelius an assertion that he perished under Decius, having been beaten with leaded or leaden objects and then decapitated along with twenty-one others including Sts. Cerealis and Sallustia, husband and wife, whom Cornelius is said to have instructed in the faith. The ultimate source for this is their latter's legendary Passio (BHL 1964), whose gist was echoed in the Liber Pontificalis and in the early medieval historical martyrologies and which may have been inspired in part by phrasing in the aforementioned letter of St. Cyprian expressing the conviction that Cornelius will have many companions in glory (multos gloriae comites). As far as we know, that never happened. Even Novatian, who -- as Cyprian observes -- as the head of a Christian church should have suffered as well, remained free.

Cornelius was buried in the crypt of Lucina in the cemetery of Callistus. He is the earliest pope known to have had a Latin-language inscription on his grave slab:

Cornelius' principal relics are now in Santa Maria in Trastevere, where in the twelfth-century apse mosaic he is depicted at St. Peter's immediate left (see in "period-pertinent images", below). In probably the earlier ninth century the abbey of the Holy Saviour on the Inde then near Aachen -- the site is now in Aachen -- received relics of Cornelius, perhaps already including cranium for which it was later famous. Gradually the abbey became known by the latter's name (hence the locale's modern German toponym  of Kornelimünster). In 875 Charles the Bald translated relics of Cornelius from Rome to Compiègne. In 1137 relics believed to be Cornelius' came to the Premonstratensian abbey at today's Ninove (Oost-Vlaanderen) where they too became the focus of pilgrimage. The similarity between the first part of his name and the standard Latin word for horn (cornu) helped make him a patron saint of matters involving cattle.


II) CYPRIAN. We know about Cyprian chiefly from his own writings, supplemented by a closely posthumous Vita by his deacon Pontius (BHL 2041) and by the so-called _Acta proconsularia_ of his trial in 258 (many versions: BHL 2037-2038q, 2038t-2040) The text is reproduced in the Divine Office for today. Well educated in rhetoric and wealthy, he was in 248, two years after his conversion to Christianity, elected bishop of Carthage, the paramount Christian diocese in Latin-speaking Africa. Cyprian distributed his wealth to the poor, continued his theological study, administered his church, and wrote treatises and letters outlining theological positions. During the Decian persecution he went underground and continued to write; in its aftermath his was a major voice for the readmission of apostates after penance and against recognition of sacraments performed by lapsi and others not in communion with the Church.

In August of 257, during the Valerianic persecution, Cyprian was exiled to the coastal city of Curubis (the name is a proparoxytone). A year later he was returned for trial in consequence of a new edict calling for the execution of bishops, presbyters, and deacons who would not sacrifice to the gods of the Roman state. He was convicted on 14th September and executed forthwith. The Depositio martyrum of the Chronographer of 354 gives that day as his feast day and the cemetery of Callistus as its place of celebration at Rome. As that cemetery is where Cornelius had been laid to rest after his translation from Centumcellae, the possibility exists that their joint feast already existed at the time of the Depositio martyrum's composition but that for some reason it was not so recorded in this list. St. Jerome (De viris illustribus, 66) notes that two died on the same day, though in different years.


Some period-pertinent images of Cornelius and Cyprian:

a) Cornelius and Cyprian as depicted (second and third from left) in the heavily restored later sixth-century mosaics (ca. 560) in the nave of Ravenna's basilica di Sant' Apollinare Nuovo (image greatly expandable): 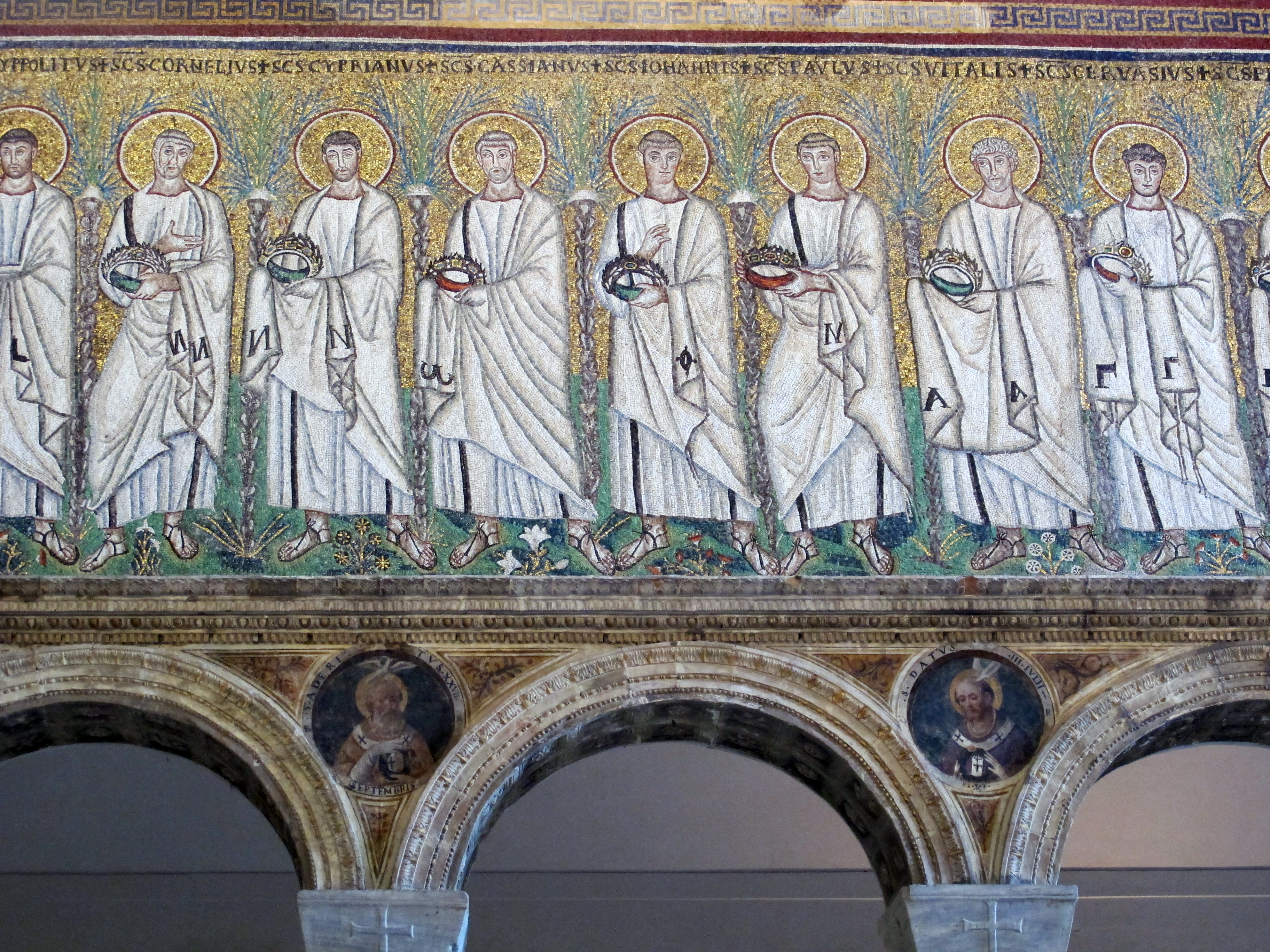 b) Cornelius and Cyprian as depicted in a damaged later sixth-century fresco (? between 561 and 574) next to Cornelius' tomb in Rome's cemetery of Callistus: 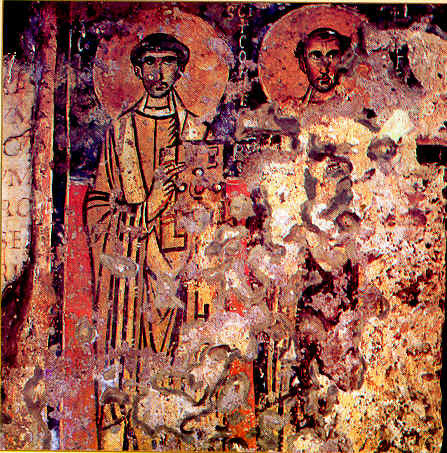 Detail view (Cornelius) showing the fresco's location at the tomb: c) Cornelius (third from right) as depicted in the mid-twelfth-century apse mosaic (1140-1143) in Rome's basilica di Santa Maria in Trastevere: g) Cornelius as portrayed in his later fourteenth-century silver and gold head reliquary (circa 1360) in the Abtei St. Benedikt von Aniane und Papst Cornelius in Aachen's locality of Kornelimünster: h) Cornelius and Cyprian (panel at right) as depicted in a late fourteenth- or fifteenth-century triptych in the pieve dei Santi Cornelio e Cipriano (a.k.a. pieve di Codiponte) in Casola in Lunigiana (MS) in Tuscany:

i) Cornelius and Cyprian as depicted in an earlier fifteenth-century missal of western German origin for the Use of Köln (circa 1401-1425; London, BL, Egerton MS 3018, fol. 92r): k) Cornelius as portrayed on an earlier fifteenth-century pilgrim's badge in pewter almost certainly from Ninove (circa 1401-1450; for a later specimen see item q below) in the Cloisters Collection of the Metropolitan Museum of Art, New York: 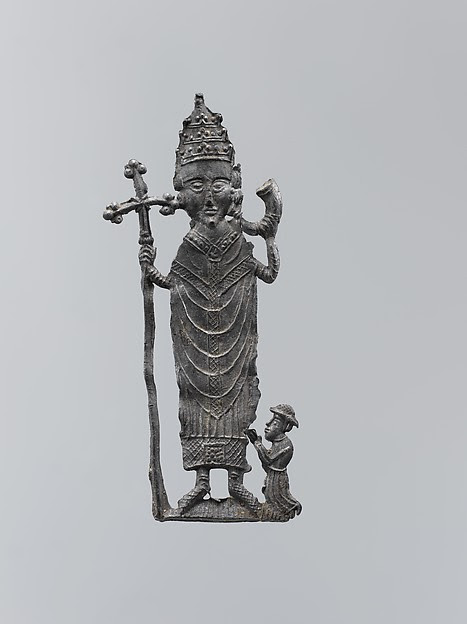 l) Cornelius and Cyprian as depicted in an early fifteenth-century breviary for the Use of Paris (circa 1414; Châteauroux, Bibliothèque municipale, ms. 2, fol. 330v):
http://tinyurl.com/33e9gzv 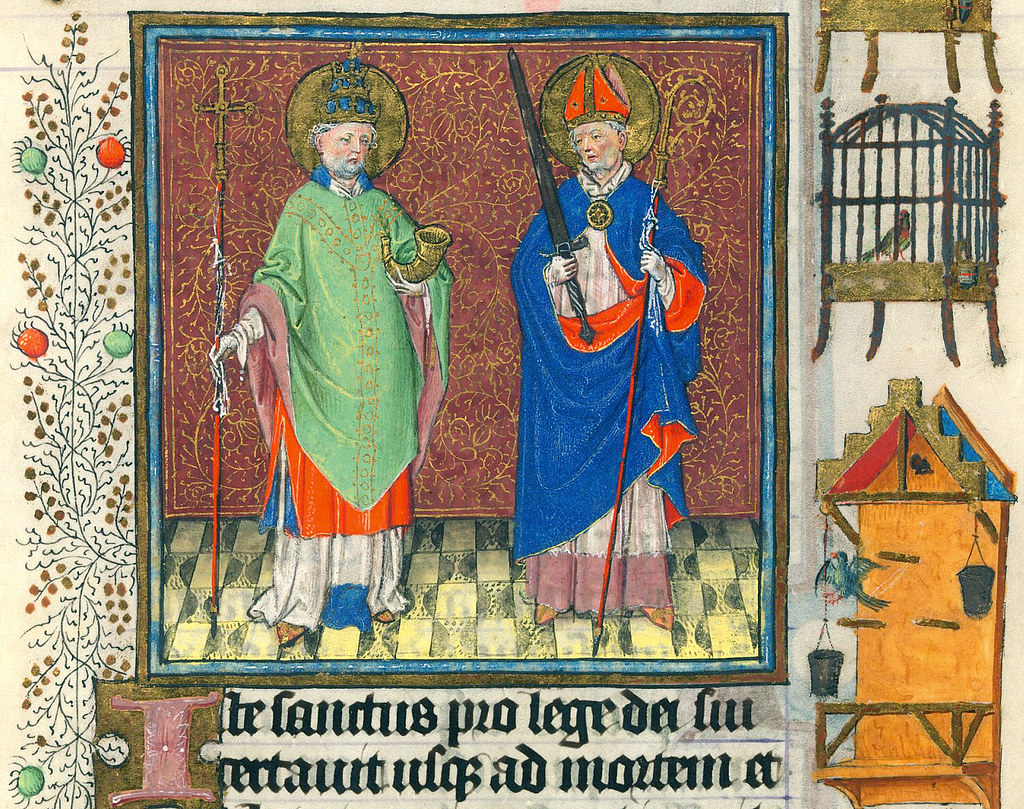 n) Cornelius as depicted (at center between Sts. Anthony of Egypt and Mary Magdalene) by Stefan Lochner in an earlier fifteenth-century panel painting (ca. 1445) in the Alte Pinakothek, Munich: r) Cornelius and Cyprian as depicted (martyrdoms) in a late fifteenth-century breviary for the Use of Langres (after 1481; Chaumont, Bibliothèque municipale, ms. 33, fol. 423v):
http://www.enluminures.culture.fr/Wave/savimage/enlumine/irht6/IRHT_097026-p.jpg

u) Cyprian as depicted (at upper left) in a hand-colored woodcut in the Beloit College copy of Hartmann Schedel's late fifteenth-century Weltchronik (Nuremberg Chronicle; 1493) at fol. CXXIv:
http://www.beloit.edu/nuremberg/book/6th_age/left_page/25%20%28Folio%20CXXIv%29.pdf

v) Cornelius and Cyprian as portrayed on Cornelius' late fifteenth-century copper-gilt and silver-gilt reliquary shrine (before 1499; restored, 1861) in the Kirche St. Cornelius und Cyprian in Lippborg, a locality of Lippetal (Kr. Soest) in Nordrhein-Westfalen:
1) Cornelius:

x) Cornelius (upper register, presenting an abbot of Kornelimünster) as depicted in an early sixteenth-century glass window panel (circa 1505-1508) formerly at the abbey of Mariawald and now in the Metropolitan Museum of Art, New York:
https://www.flickr.com/photos/peterjr1961/4114544060

y) Cornelius as depicted in an earlier sixteenth-century glass window panel (circa 1520-1521) formerly at the abbey of Mariawald and now in the Victoria and Albert Museum, London: 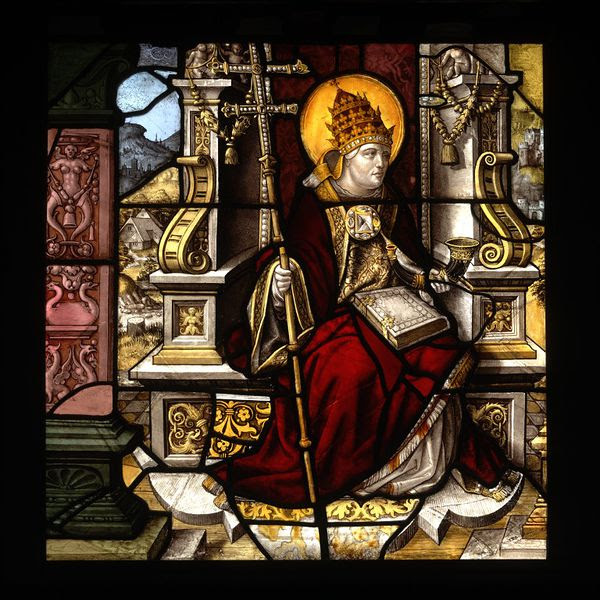