Today is the feast of St Matthew Apostle and Evangelist. This is going to be a long post, but I have several good friends called Matthew so I am posting this with them in mind.

As with others of this type it is based on posts by contributors to the Medieval Religion discussion group. As is my wont I have opened and copied and pasted many of the images. Flickr does not allow me to do that, nor do some picture gallery collections - so it is worth clicking on the links. Those I have reproduced can often be seen in larger format by clicking on the appropriate link to the lower right in each case. This is a particularly rich and varied selection of depictions of St Matthew and in various different mediums, and illustrates the vitality of art and artists over almost a thousand years.


Gordon Plumb opened the batting with these images in glass of St Matthew:

Greystoke, Cumbria, east window, 2d, St Matthew in prison from the 15thC. window by York glaziers telling the story of St Andrew including his journey to Wronden to rescue St Matthew from prison there:
https://www.flickr.com/photos/22274117@N08/3016449814

John Dillon then posted the following:

Further period-pertinent images of St. Matthew the Evangelist (NB: for convenience, I'm calling Matthew's tetramorphic image "his angel" throughout: for instances of its portrayal as an actual angel interacting with Matthew see items f, pp, ss, yy, and eee).

a) as depicted (second from top at right; above him, St. Andrew; below him, St. Paul) among the roundels of apostles framing the Theotokos and Christ Child in a sixth-century tapestry icon from Egypt in the Cleveland Museum of Art, Cleveland (OH): 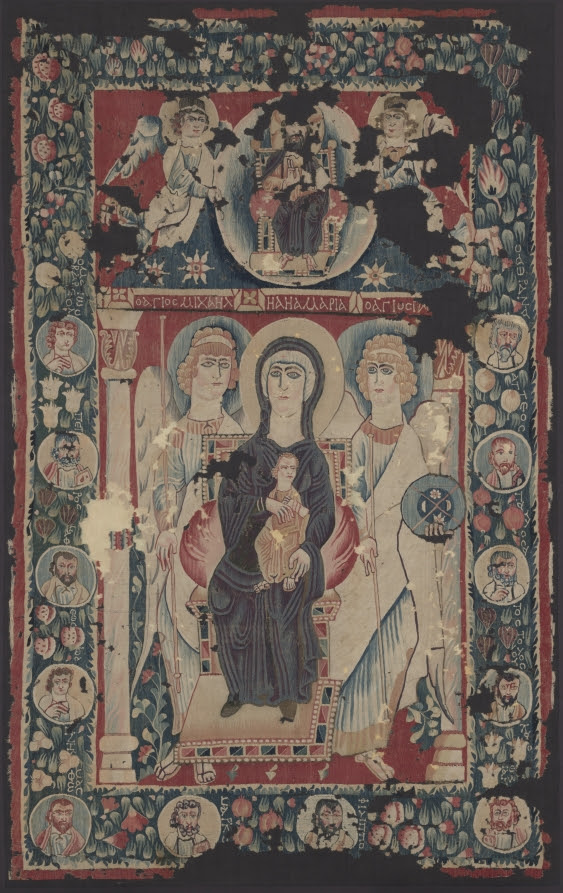 b) as depicted in a late sixth-century mosaic formerly in the apse of the church of the Panagia Kanakaria at Lythrankomi in Turkish-occupied northern Cyprus and now in the Byzantine Museum in that part of Nicosia under the jurisdiction of the Republic of Cyprus: 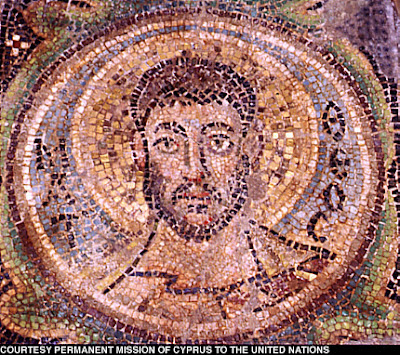 f) as depicted (with his angel) in a full-page illumination in the late eighth-century Godescalc Gospels (between 781 and 783; Paris, BnF, ms. Nouvelle acquisition latine 1203, fol. 1): i) as depicted in a full-page illumination in a late ninth- or early tenth-century Gospels from Landévennec (Oxford, Bodleian Library, MS Auct. D. 2. 16, fol.28v):

l) as depicted in the earlier eleventh-century mosaics (restored between 1953 and 1962) in the narthex of the church of the Theotokos in the monastery of Hosios Loukas near Distomo in Phokis:

n) as depicted in the mid-eleventh-century mosaics in the katholikon of the Nea Moni on Chios:
http://www.eikonografos.com/album/albums/uploads/nea_moni/10.jpg
Detail view:
http://tinyurl.com/nsl72z6

o) as portrayed in high relief on a later eleventh-century ivory plaque of the Four Evangelists of Rhenish origin in the Victoria and Albert Museum, London: 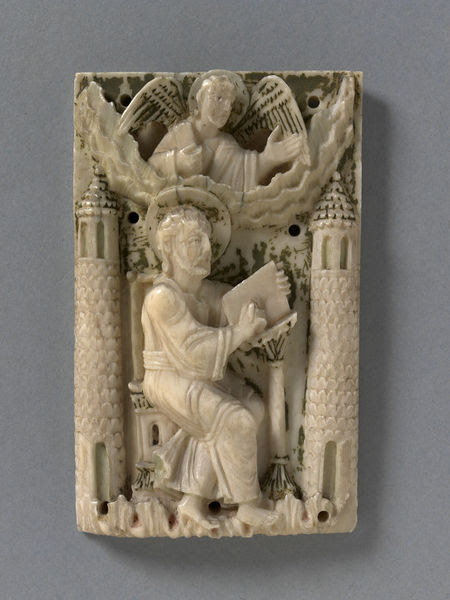 p) as depicted in a twelfth-century copy of the Gospel of Matthew with gloss (Châlons-en-Champagne, Bibliothèques de Châlons, Bibliothèque Pompidou, ms. 78 [86], fol. 1r): q) as depicted in a full-page illumination an earlier twelfth-century Gospels from Agen or from the abbey of Moissac (Paris, BnF, ms. Latin 254, fol. 10r): s) as depicted by the Kokkinobaphos Master in a full-page illumination formerly part of an earlier twelfth-century Gospels from Constantinople (c. 1126-1150; Mt. Athos, Monastery of Great Lavra MS A44) and now in the Walters Art Gallery and Museum, Baltimore (fol. W.530.Er):
http://tinyurl.com/qyang7m

t) as depicted (at left; at right, St. John the Theologian) in the mid-twelfth-century apse mosaic in the left aisle of Trieste's basilica cattedrale di San Giusto martire: u) as depicted (upper register at center) in the mid-twelfth-century apse mosaics (completed in 1148) of the basilica cattedrale della Trasfigurazione in Cefalù: v) as portrayed (at right; at left, St. Thomas) on a later twelfth-century gilt and enameled copper plaque of Mosan origin (c. 1160) in the Cleveland Museum of Art, Cleveland (OH): 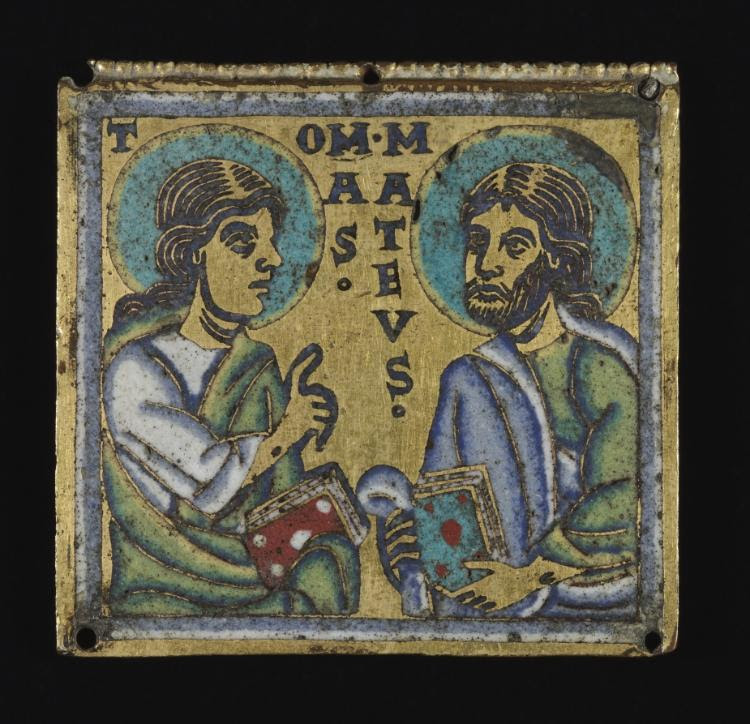 w) as portrayed in relief (at far right in this view, drinking from a cup) by Anselmo da Campione in his Last Supper panel on the later twelfth-century parapet (_pontile_; c. 1170-1180) in the cattedrale di San Geminiano in Modena: y) as portrayed in relief (at left; at centre, St. Thomas; at right, St. Peter) on the late twelfth-century enameled copper reliquary châsse (of Limousin origin) of Sts. Calminus and Namadia in the église abbatiale St.-Pierre et St.-Caprais in Mozac (Puy-de-Dôme):

z) as portrayed (top row and the first two views in the following row; scenes of his legendary apostolate in Ethiopia) on a late twelfth-century capital found at Nazareth in 1908 and now mounted on a wall of the modern Church of the Annunciation there:
http://picasaweb.google.com/JuliannaLees/NazarethCapitals#

aa) as portrayed (at center; at right, St. John the Evangelist) in a late twelfth-century jamb statue on the Galluspforte (the north portal; ca. 1180-1190) of the Basler Münster: bb) as portrayed in high relief on an earlier thirteenth-century enameled plaque (c. 1220-1230) from the main altar of the then priory church of St. Michael at Grandmont (Haute-Vienne) and now in the Musée du Louvre, Paris:

cc) as portrayed in a statue on the earlier thirteenth-century Angel Pillar (c. 1230) in the cathédrale Notre-Dame in Strasbourg:

dd) as depicted in a later thirteenth-century fresco (between 1260 and 1263) in the nave of the church of the Holy Apostles in the Patriarchate of Peć at Peć in, depending on one's view of the matter, either the Republic of Kosovo or Serbia's province of Kosovo and Metohija:
http://tinyurl.com/2clkpom
Detail view:
http://tinyurl.com/2e687k5

ee) as portrayed (second from left) in a silver gilt statuette on the later thirteenth-century copper gilt châsse of St. Remaclus (completed betw. 1263 and 1268) in the église Saint-Sébastien in Stavelot:
http://tinyurl.com/o2u8rsz
Detail view (zoomable image):
http://balat.kikirpa.be/photo.php?path=KM3923&objnr=10074187&lang=en-GB&nr=1

ff) as depicted by Cimabue in a later thirteenth-century fresco (ca. 1277-1280) in the upper church of the basilica di San Francesco, Assisi (in a vault field that collapsed as a result of the earthquake of 1997; restoration completed, 2007):

gg) as portrayed in a later thirteenth-century statue (ca. 1280) on a pillar in the inner choir of Köln's Hohe Domkirche Sankt Petrus und Maria: hh) as depicted (at far left) by Duccio di Buoninsegna in his early fourteenth-century Maestà altarpiece (between 1308-1311) in the Museo del Opera del Duomo in Siena:
http://klp.pl/admin-malarstwo/images/d_duccio_duccio/d_duccio_duccio21.jpg

ii) as depicted in an earlier fourteenth-century fresco (c. 1310-1320), often attributed to Giotto di Bondone, in the lower church of the basilica di San Francesco, Assisi:

jj) as depicted by the workshop of Simone Martini in an early fourteenth-century panel painting (ca. 1317-1320) in the National Gallery of Art, Washington, DC:
http://www.nga.gov/content/ngaweb/Collection/art-object-page.41633.html

kk) as depicted (centre panel, at left in upper register) by Ugolino di Nerio in an earlier fourteenth-century panel painting (ca. 1325-1330), from his dismembered Santa Croce altarpiece, in the Gemäldegalerie, Berlin:

mm) as depicted (at left) by Bernardo Daddi in an earlier fourteenth-century triptych of the BVM with saints (1328) in the Galleria degli Uffizi, Florence: nn) as depicted in a November calendar portrait in the earlier fourteenth-century frescoes (betw. 1335 and 1350) of the narthex in the church of the Holy Ascension at the Visoki Dečani monastery near Peć in, depending on one's view of the matter, either the Republic of Kosovo or Serbia's province of Kosovo and Metohija:
http://tinyurl.com/obejyr9

pp) as depicted (with his angel) in a later fourteenth-century panel painting (betw. 1357 and 1367) by Theodoric of Prague and workshop in the Holy Cross Chapel, Karlštejn Castle (near Prague): 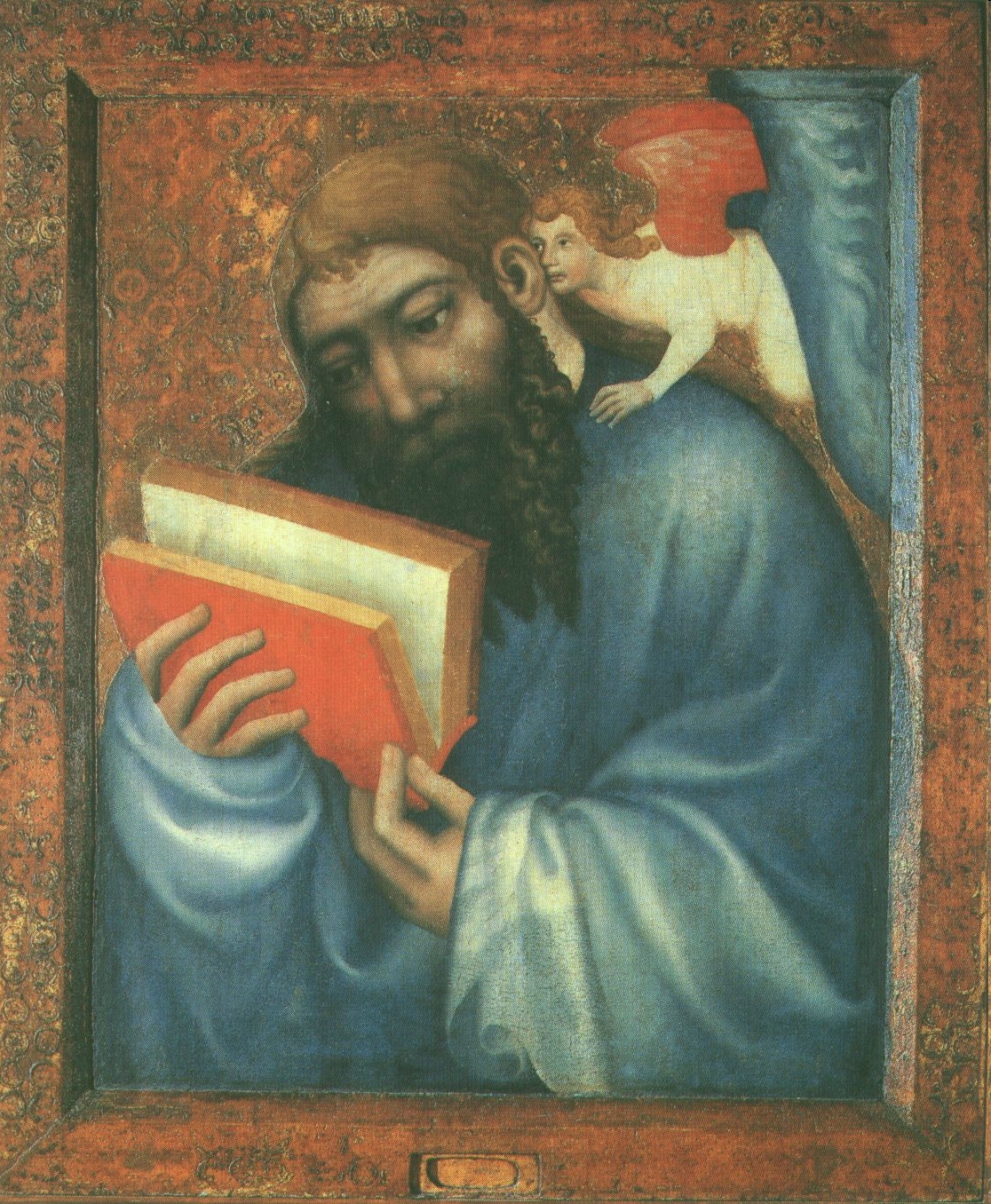 qq) as depicted in the later fourteenth-century frescoes (1360s and 1370s; restored in 1968-1970) in the church of St. Demetrius in Marko's Monastery at Markova Sušica:

rr) as depicted by Andrea Orcagna (M. as evangelist and as missionary in Ethiopia) in a later fourteenth-century triptych (ca. 1367; completed by Jacopo di Cione) in the Galleria degli Uffizi, Florence:

ss) as depicted (at far right, with his angel) by Spinello Aretino in a late fourteenth-century triptych of the BVM and saints (1391) in the Galleria dell'Accademia, Florence:

tt) as portrayed in high relief (third from left) on the late fourteenth- or early fifteenth-century tomb of St. Wendelin in his basilica in Sankt Wendel:

vv) as portrayed by Bernardo Ciuffagni in an early fifteenth-century statue (between 1410 and 1415) for the facade of the cathedral of Florence (statue now in the Museo dell'Opera del Duomo):

yy) as portrayed in relief (with his angel) by Donatello in an earlier fifteenth-century terracotta roundel (betw. 1428 and 1445) in the old sacristy of Florence's basilica di San Lorenzo:
http://www.wga.hu/art/d/donatell/2_mature/sacristy/1sacri09.jpg

zz) as depicted (at left; at right, St. Francis of Assisi) by Giovanni di Paolo in an early fifteenth-century predella panel (ca. 1435) , from a dismembered altarpiece, in the Metropolitan Museum of Art, New York:

ccc) as portrayed in a polychromed and gilt later fifteenth-century wooden statue from Brabant (ca. 1470) in the Metropolitan Museum of Art, New York: 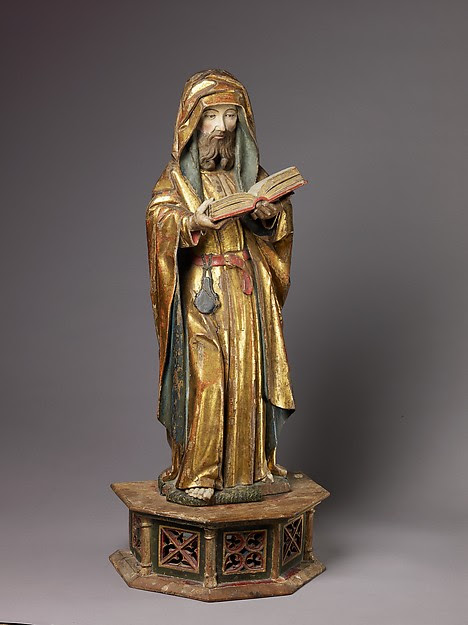 ddd) as depicted (at left; at right, St. Simon the Zealot) by Miguel Ximénez and workshop in a panel of his and Martín Bernad's late fifteenth-century altarpiece of the Holy Cross (completed, 1487) for the parish church of Blesa (Teruel) and now, after dismemberment, mostly in the Museo de Zaragoza: 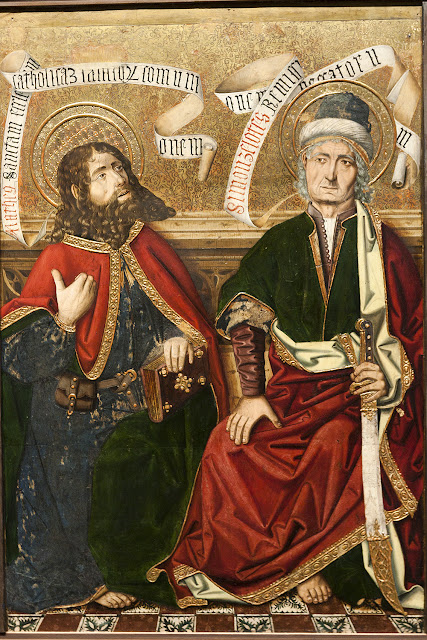 eee) as depicted (with his angel) in a late fifteenth-century breviary according to the Use of Besançon (before 1498; Besançon, Bibliothèque municipale, ms. 69, p. 772):

To all those wonderful and varied images I will add this additional one, from the statues in King Henry VII's Chapel at Westminster Abbey: