The First Battle of St Albans

Today is the 560th anniversary of the First Battle of St Albans in 1455, which is usually considered the first battle in the Wars of the Roses. That, of course, depends on whether you see the conflicts of the mid to later fifteenth century as one or a set of wars, or rather see the variousshort-lived outbreaks of violence as not necessarily directly related, or indeed much out of the ordinary for later medieval politics in England or Europe as a whole.
There is an online account of the day at First Battle of St Albans. One distinguished historian summed it up as little more than a scuffle in a street, which is not altogether unfair.

A modern painting of the aftermath of the battle by Graham Turner
(www.studio88.co.uk)
Image:richardiii.net
The battle or scuffle was an assault by the Yorkist faction on those escorting King Henry VI northwards, the victims leading members of the Court faction - the Lancastrians. The number of deaths was probably quite low, but what mattered were the specific casualties.
The most prominent amongst the dead was Edmund Beaufort, 2nd Duke of Somerset 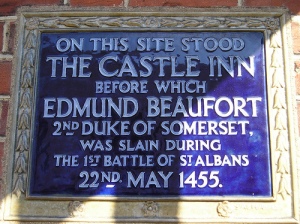 A plaque marking the site of the Duke of Somerset's death
Image:dodgingarrows.wordpress.com
The antagonism between the Dukes of Somerset and York was a major factor in the politics leading up to this first outbreak of actual fighting. The rivalry between Somerset and the Earl of Warwick, York's nephew, over the inheritance of the Beauchamp family - their wives being co-heiresses to the earlier earls of Warwick - added a strong financial and personal element to the vendetta. 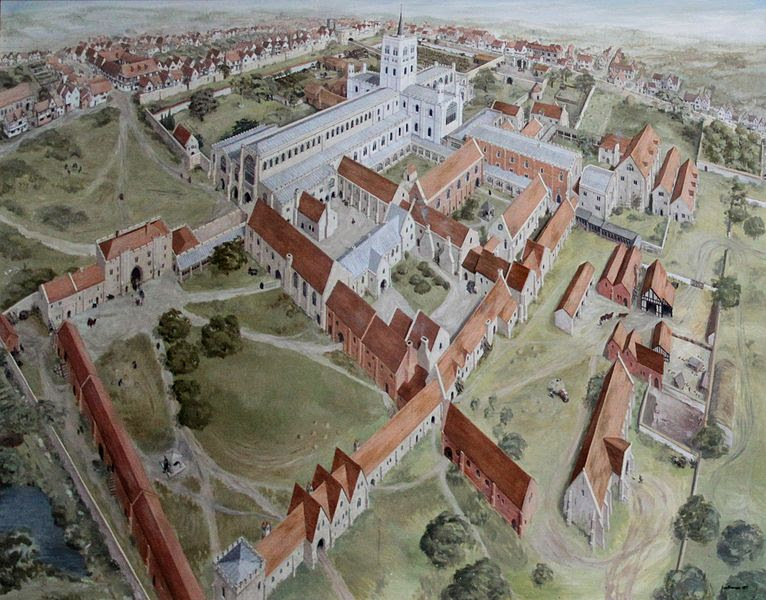 St Albans Abbey before the dissolution


The conflict thus begun would not go away, despite peace-initiatives by King Henry VI. The Yorkists officially blames Somerset and teh other dead Lancastrian commanders for starting the fighting, leacving their sons and heirs to seek redress and revenge.
Thus Duke Edmund's son, the nineteen year old Earl of Dorset, carried away "soe injured" in a cart from the battle was to become as third Duke of Somerset aleasing lancastrian commander. He died on the scaffold after the battle of Hexham in 1464. His brother and heir, Edmund the (titular) fourth duke, died similarly after the battle of Tewkesbury in 1471, a battle which claimed the life of the last male legitimate Beaufort, Lord John, who aged about sixteen, can only have just been born when his father was killed at St Albans.
Lord Clifford, another casualty in 1455 was succeeded by his som, the so-called "Butcher"Clifford, whom Shakespeare uses to typify the mindset of the revenge killings that ensued. So in the Shakespearean depiction of the battle of Wakefield in 1460 Clifford kills the Earl of Rutland, York's second son, saying "Thy father slew my father and I will slay thee" before going off to assist in killing the Duke of York. He himslf was killed in the early stages of the battle of Towton a few months later. As written by the Bard of Avon well over acentury later it may well be fiction, but it captures the politics of faction. 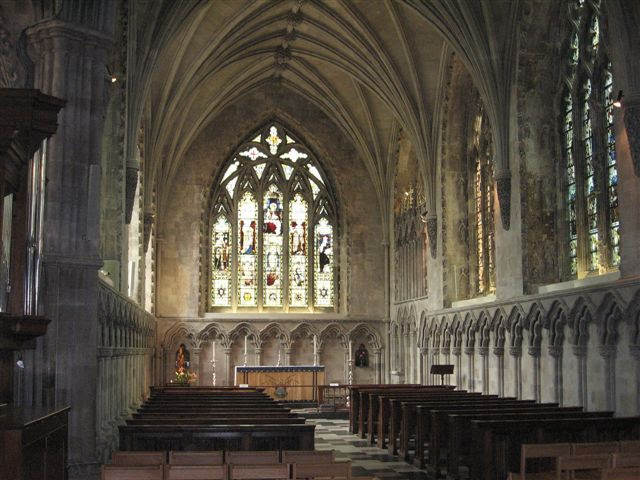 The Lady Chapel, St Albans
Image:Wikimedia
The prominent victims of the battle were interred in the Lady Chapel of the abbey.