The Coronation of King Charles X in 1825


190 years ago, on May 29th 1825, there took place the coronation of King Charles X in the cathedral at Rheims. Fify years earlier, and a world away, his elder brother King Louis XVI had been anointed and crowned at Rheims. Now in a true spirit of restoration once more a King of France approached his sacre. In style and splendour the Coronation was similar to that of King George IV at Westminster in 1821. They can both be seen as part of that awakening interest in medieval culture across western Europe at the time. For an introduction to the history of the ceremonial see the online article Coronation of the French monarch.

The Coronation of King Charles X
The homage of the Dauphin
François Gérard, 1827. Palace of Tau, Rheims The Crown of the Dauiphin, Louis Antoine, Duke of Angouleme, and later the de jure King Louis XIXwhich he wore at his father's Coronation in 1825. The crown was apparently made in 1823.


There are pictures of some of  the liturgical vessels and robes and other insignia used at the Coronation, such as the Chancellor's mace which are now preserved in the Tau Palace adjoining the cathedral at the website Charles X, The Last Coronation. Tau Palace, Reims, [traveltoeat.com/charles-x-the-last-coronation-tau-palace-reims-france/} - but the link appears unstable.

For the Coronation a new state coach was made, and which today can be seen at Versailles.. 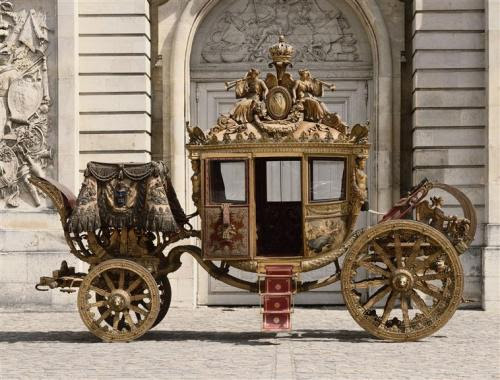 Image:vivelareine.tumblr.com
There is a video about it on the website at The Coronation Coach of Charles X - 1825, with some details about it and its subsequent history at Close-up on the Coronation Coach of Charles X - 1825. There are more pictures of the coach and other French royal coaches, including the very impressive funeral coach made for the body of King Louis XVIII in 1824, here. 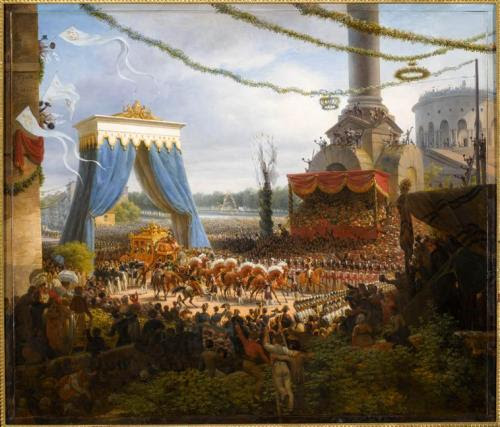 
A British link with the coronation can still be seen at Alnwick castle in Northumbertland:

The Percy family State Carriage which carried the third Duke of Northumberland as KingGeorge IV’s personal representative at the coronation of King Charles X.


I am. of course, awaiting the next coronation of a King of France at Rheims.