The Coronation of King Charles X - the Regalia

Following on from my previous post I have found a useful online site, which covers the history of both the regalia and th crown jewels, including their sale and dispersal in the 1880s, and which can be accessed here.  I have copied and slightly edited those parts about the surviving pieces of the French regalia which would have been used in 1825.


There are still in the Louvre French coronation ornaments of varying antiquity which were 'restored' for the coronations of Napoleon and King Charles X.

The most important item is the Sword of Charlemagne known as Joyeuse. The hilt and the ornamentation of the scabbard and hilt are in gold. The pommel is adorned with the intertwined figures of two fabulous birds resembling phoenixes. The guard terminates with two winged lions, the eyes being of lapis lazuli. The best authorities attribute the handle to between 1000 and 1100 AD although some consider that it has features which could date it back to the Carolingian period. The grip was remade in the 1800s but was restored for the coronation of King Charles X when the blue velvet covering was used. The goldsmith's work on the scabbard is enriched with sapphires, topazes, amethysts, a garnet and a rock crystal. The sword and scabbard in its original state can be seen in  Rigaud's portrait of King Louis XIV. The Sword of Charlemagne ("Joyeuse") 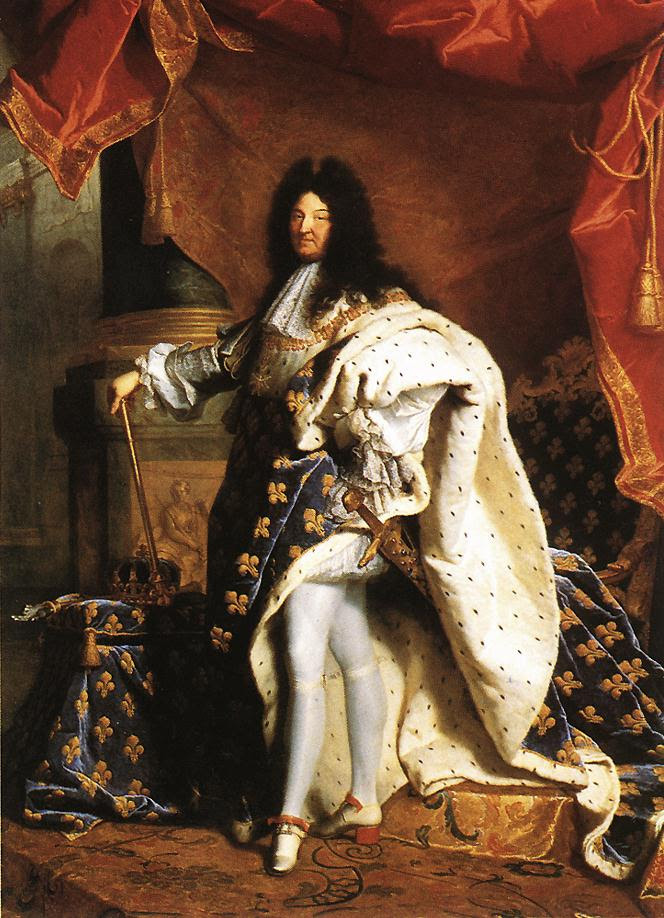 Hyacinthe Rigaud's portrait of King Louis XIV. The sword 'Joyuese' is at his side.

The coronation spurs are made of gold and were restored in the 1800s when some garnets were added and the fastenings of gold and velvet were provided. 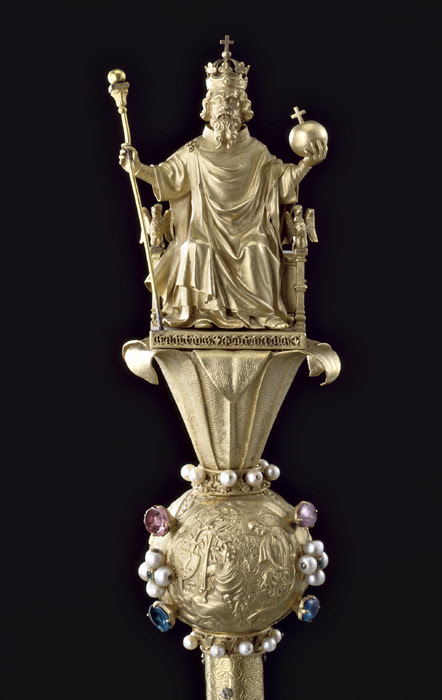 The Royal Sceptre, depicting Charlemagne seated on a throne.

The royal sceptre consists of the sceptre proper, a short rod with a lily resting on a ball, on the top of which rests a detailed statue of Charlemagne seated on a throne, with a closed crown on his head and a long scepter in his right hand and an orb in his left. On the step of the throne is the inscription Sanctus Karolus Magnus, Italia, Roma, Germania. On the base of the lily are three bas-reliefs of subjects taken from the Chronicle of Archbishop Turpin. The first subject is taken from the beginnings of the Chronicle in which the Apostle St. John ordered Charlemagne to deliver Spain and Galicia from the power of the Saracens. The second is taken from Chapter XIX of the Chronicle: "How the lances and axes of the Christian knights were found all flowing and rooted in the earth." The third subject is from Chapter XXXII of the Chronicle, and represents the death of Charlemagne. The sceptre was adapted for King Louis XIV into a long sceptre by the addition of a plain gold staff six feet high which could have been seperated into three pieces. The present staff (formerly that belonging to the Precentor of St. Denis) bears the following inscription in old French:

Of silver this baton was made
In the year MCC eighty [sic] [1280 AD?]
Fourteen, neither more nor less
(Of) those who will hold it in their hands
Will pray when life is ended
That his soul shall be transported to heaven
...Let it be kept
and he looked at great feasts
For to maintain loyalty
The Precentor should carry it in his hand.
Today the inscription is covered with purple velvet embroidered with fleurs-de-lis, added for the coronation of King Charles X. 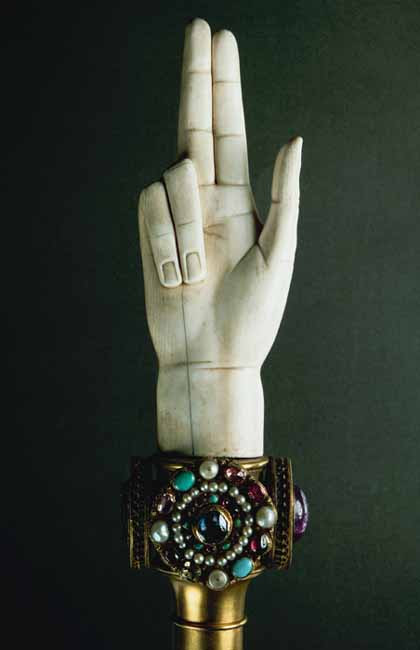 The Hand of Justice sceptre, now in the Louvre.
The lower image  mirrored - it should be a reverse of what you see.

The clasp of the royal mantle, sometimes called the Clasp of St. Louis, is a large lozenge-shaped chased silver plate in the center of which is a large fleur-de-lis picked out with jewels. Several stones are now missing but 6 amethysts, 6 emeralds and 11 garnets remain while the framework is adorned with 26 garnets and 2 sapphires. Clasps of this sort had been worn by the Kings of France for several centuries and certainly earlier than St. Louis, but this one, despite its inscription in the inventories of St. Denis, is attributed to the 1300s and is similar to the one described in an inventory of the jewels of King Charles V taken in 1379.

The signet of St. Louis which was formerly kept at St. Denis has on the bezel a pale, table-cut aquamarine in which is engraved the figure of St. Louis standing crowned and carrying a scepter and the letters S.L., --- Sigillim Ludovici. The setting is of gold and on the hoop of the ring is a fleur-de-lis in niello. As the figure of St. Louis has a nimbus it must be of a later date than his canonization in 1297, twenty years after his death.

The crown of King Charles X, designed by the House of Bapst for King Louis XVIII. It followed the traditional pattern and the Regent Diamond was set in the great surmounting fleur-de-lis. It was not broken up until 1854, at which date the frame without the stones was kept in the cellars of the Ministry of Finance. The Crown Jewelers, Messrs Bapst, offered to purchase the crown, set it with facsimile stones and present it to the Louvre. Unfortunately, this led to authorities ordering it to be secretly broken up. 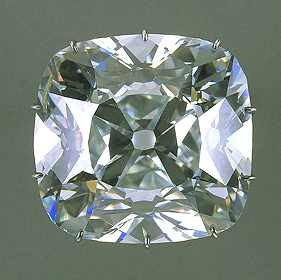 The Regent Diamond 140.50 carats
There is a history of this famous stone here