I stayed up through the night and watched the General Election results at a friend's house, not leaving until after 10.30 this morning.

The result is one that few - not least the pollsters - saw coming though one friend predicted result two months ago. It was perhaps what I expected then, two months ago, but like others I was somewhat misled by the polls, and by Election day I think I expected a hung Parliament, and political scrambling to put together another coalition or seeking support for a minority government, and possibly a real constitutional crisis. It is quite satisfying to find that the pollsters not infallible, and the exit poll released at 10pm certainly raised ones interest in the forthcoming declarations.


A number of the candidates standing were people I know from my time at Oriel, at the Oxford Union or elsewhere in Oxford or, as I realised during the television coverage, from my home town. Not all were successful, but some were either in being re-elected or getting into the Commons for the first time.

I was also interested to observe what was happening in my former home area, which had several prominent Labour politicians on screen or in the frame.

At such times we are all tempted to become political pundits, and I will allow myself to succumb a little, and to put on record a few thoughts.


Having been assured in advance by the BBC commentators that this could be the most important Election for generation, and given its element of surprise and the evident shift in seat distribution, now we have the results,is it epochal?How does it stand as a result alongside 1906, 1945 or 1979?a

I am too much the historian and too cautious by temperament to give a quick answer, but I suspect it may be of comparable significance.

The day after the 1997 Election I recall talking in the Oxford Union to a Liberal supporter, Duncan Hames, who went on to become a Liberal MP - both he and his wife, Jo Swinson, lost their seats in yesterday's rout - and he spoke of the Conservatives being likely to be out of office for several Parliaments. It has taken four General Elections for them to get back as a single party government, and their continuous absence from office between 1997 and 2010 the longest in the history of the Tories since their emergence under William Pitt the younger. Now the Liberals face something similar, and so, it is by no means improbable, does the Labour Party. So on that basis 201t5 may be a watershed.

However to say parties will not recover may (but may not) be premature. Who in the mid-nineteenth century would have predicted the eclipse in the twentieth century of the defining political grouping of mid-Victorian Britain, the Liberal Party of Lord John Russell, Lord Palmerston and, above all, Mr Gladstone. Equally would Conservatives/Unionists have seen in the wake of 1905-6 their recovery becoming apparent as early as 1910, or the demise of Asquithian and Lloyd-George type New Liberalism? 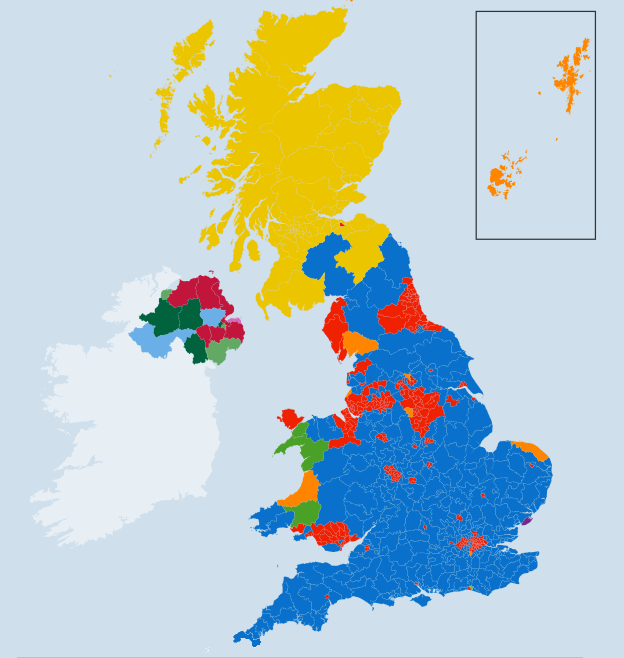 The eclipse of both Labour and the Liberals will take  them time to recover, if they can given the loss to both of parts of their political heartlands. For labour the loss of seemingly guaranteed seats in west central Scotland to the SNP will be difficult to manage without, and the likelihood of regaining them not high on present form.
In Scotland the block of 56 SNP seats may, in effect, and given the problems facing both Labour and the Liberals, make the Scots Nats the effective opposition. It raises serious issues about the future of the Union. It may, given last September's referendum merely indicate pragmatic voting for the SNP by electors anxious to get the best deal for Scotland, but not indicative of a desire for independence. That one must hope is the case. Despite their success the SNP may well find that facing a Conservative government with a majority they are relatively limited in what they can achieve, rather like the Lib Dems after the 1997 election - the huge Blairite majority negated the Liberals success in taking seats.

I was struck by a point made in an interview by the former Labour First Minister Lord McConnell when he said both Conservatives and Labour campaigning under a "One Nation" slogan were missing the reality that the UK is a polity comprising several nations - that is avery good point to make and keep in mind.

The map of the results in Wales reminds me of that of the same area in the later middle ages - the Marches other than much of Glamorgan are held by the Conservatives, the post 1284 Principality by Plaid Cymru, Labour and the Liberals, There may be no obvious correlation, but it strikes me as interesting.

Across the water I was particularly pleased to see the taking of Fermanagh and South Tyrone by the Ulster Unionists - an Ulster-born student here pointed out that this was the first case of Unionists recovering territory from the Nationalist parties in living memory.

UKIP can now take up the Lib Dem cause of the unfairness of the electoral system in terms of the relationship of seats to votes, and point to the differing result for the SNP - considerably fewer votes but 56 MPs as opposed to their one.

Once again the endurance and ultimate cohesion of the formidable political machine that is the Conservative party has been demonstrated. As someone who would point to its origins with William Pitt the younger in 1783 it remains the most successful continuous political grouping in Europe. One of my friends from Oriel, Edward Argar, whom I recall as an undergraduate joined their Parliamentary ranks as MP for Charnwood with a majority of close to 17,000. Makes me feel quite old, but then I do now recall fifteen General Elections!