Carthusian and other martyrs of 1535

480 years ago, on May 4th 1535, the Carthusian Priors of London, Beauvale and Axholme, Richard Reynolds chaplain to the nuns of Syon Abbey and the rector of Isleworth were hung drawn and quartered at Tyburn for refusing to take the oath to the Henrician Act of Supremacy. 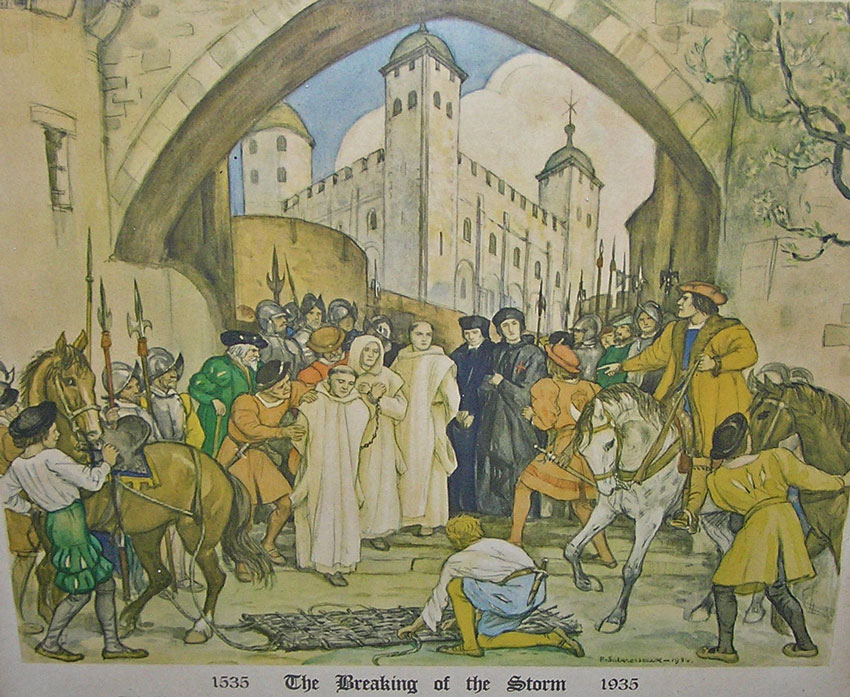 Today is the great feast honoring all of the Catholic Martyrs of the English Reformation: those canonized by Pope Paul VI and those beatified by Popes John Paul II, Pius XI, and Leo XIII. Many of the beatified martyrs, especially those declared martyrs by Popes Pius XI and Leo XIII, are not well known. Perhaps all the beatified martyrs should be canonized by Pope Francis?
This feast was moved to this date in 2000 with a new liturgical calendar for the dioceses of England and Wales approved by the Vatican; then in 2010 it was elevated to a Feast (not just a Memorial). It is not a Feast or Memorial on the Liturgical Calendar in the USA--I think it should be!
Moving it to May 4 meant that the feast is celebrated on the anniversary of the protomartyrs of the English Reformation, the Priors of the Carthusian order, a parish priest, and the confessor and chaplain of the Brigittine order at Syon Abbey. These five men, St. John Houghton, St. Augustine Webster, St. Robert Lawrence, Blessed John Haile, and St. Richard Reynolds, were brutally executed at Tyburn before a crowd of Court witnesses. Some sources even suggest that Henry VIII was there in disguise. Drawn on hurdles from the Tower of London (whence St. Thomas More saw them depart), they were hung and quartered while still alive.
Image and text: Supremacy and Suvival

There are online articles about the protomartyrs at John Houghton, Robert Lawrence, Augustine Webster and Richard Reynolds. As the last article points out St Richard was an outstanding spiritual consellor, and known as the Angel of Syon.


Whilst the other martyrs were being disembowelled he encouraged them with the idea that the sharp breakfast they were enduring would lead to the eternal banquet of heaven.

Fragments of the London Charterhouse survive in the present buildings at Charterhouse, and there are substantial fragments of the priory at Beauvale in Nottinghamshire. My previous posts about Syon Abbey can be found by clicking on the link at the end of this post. It appears likely that the pinnacle from the gatehouse of the abbey which the community of Syon has treasured in their wanderings to the Low Countries, Rouen, Lisbon and their return to Devon in 1861 is the one upon which was displayed one of St Richard's quarters following his execution.

This evening I attended a beautiful and well attended Extraordinary Form High Mass at the Oxford Oratory for the feast of the English Martyrs. This obviously commemorated all the martyrs of the years 1535 to 1681, but those from this day 480 years ago were especially in my mind.
Posted by Once I Was A Clever Boy at 20:21