Today is the 460th anniversary of the election of Pope Paul IV in 1555. He was the third Pope to reign that year, as Pope Julius III, Supreme Pontiff since 1550, had died on March 23rd and been succeeded by Pope Marcellus II on April 9th, but who himself died on May 1st.

These three Popes were men of contrasts, who embody not a few of the dilemmas and difficulties facing the Papacy before the Council of Trent had produced a definitive plan that could be implemented across the Church.

Of the three  Pope Julius III appears to represent all that was worst in terms of neglect and unedifying lifestyle about the Renaissance Papacy, not least in his extraordinary relationship with his adoptive nephew Cardinal Innocenti - Innocenzo Ciocchi Del Monte - who was indeed curiously named in the light of his career.

Pope Marcellus II might have been a reforner had he lived. He is one of those quiet popes who slot in between the more famous ( or infamous ) ones in this era and who might have been much more significant had they lived and reigne dlonger. He is principally remembered as the person honoured in the title of the Missa Papae Marcellae. 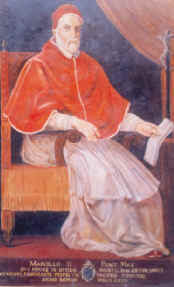 
His successor, Pope Paul IV, was certainly a reformer in his own eyes, and on his own terms. An uncompromising man with strong and determined views and prejudices who managed to alienate or to be alienated from those who should have been his allies - including King Philip II and Cardinal Pole.

It is perhaps worth recalling that it was these three Pope who were the last to preside over a Church that included  an England that was formally reconciled to the Papacy from November 30th 1554, and that it was Pope Paul IV who confirmed the existing English diocesan pattern that survives in the Church of England and was only changed for the Catholic Church by Pope Pius IX in 1850 with the re-establishment of the Catholic Hierarchy, with effective bishops in a new diocesan structure. It was also Pope Paul IV who confirmed King Philip amd Queen Mary in their title as King of Ireland - a title assumed by King Henry VIII in 1541.

Reflecting on these men you really can rather see why a St Philip Neri was required as Apostle of Rome with his dedication and piety, his restraint and pastoral skill.