Earlier today I had the good fortune to visit Ockwells Manor near Bray in Berkshire with the Oxford University Heraldry Society and the Maidenhead Civic Society. This mid-fiteenth century house is in private ownership and not usually open for visitors, so this was a rare opportunity to visit this important building.

The east front of Ockwells in 1928
The oriel windows are additions of 1889-93, when the dorrway was widened to the full width of the porch. The archway on the far left led to the chapel.

Ockwells Manor is a manor house begun in the years 1446 - 1450 by John Norreys , Keeper of the Great Wardrobe of King Henry VI, and Treasurer of the Chamber and Keeper of the Queen's Jewels to Queen Margaret of Anjou. He remained in office under King Edward IV after 1461, and was indeed made a Knight of the Bath by the Yorkist king. There is a life of him here. The house does not appear to have been completed until about the time of Sir John's  death in 1466. Norreys imself is linked to the origin of civic life in Maidenhead; in 1451 Norreys and his brothers helped to found a guild based at a chapel in the middle of the High Street.

The house was described by Sir Nikolaus Pevsner as “the most refined and the most sophisticated timber-framed mansion in England” (The Buildings of England: Berkshire, 1966). Although it has lost its flanking wings, which contained a chapel - still being built in 1465 - and presumably lodgings for retainers, and of which only fragments survive, in the eighteenth and early nineteenth centurie, the main house has survived, as have a gateway and the barns and dovecote which face the manor across the courtyard. From about 1625 until the 1880s Ockwells was leased out, and declinedinto being a farmhouse - neglect which in many ways was benign, although there were significant losses, but by 1880 there was a serious risk that the dilapidated house would collapse or be demolished.Ockwells was one of the cases that inspired William Morris to found the Society for the Protection of Ancient Buildings. It was rescued by succesive tenants and is now, following further restoration in the 1980s, in beautiful condition.

The especial glory of Ockwells is the armorial stained glass installed by Norreys depicting the arms of his patrons and friends in the Lancastrian establishment and which is still in its original position in the windows of the Great Hall. There are views of some of these panels on the Corpus Vitrearum Medii Aevi website which can be seen here.

The Great Hall
The long table, shown here on the left, is original to the building

The arms of Queen Margaret of Anjou, the Duke of Suffolk and King Henry VI in the Great Hall 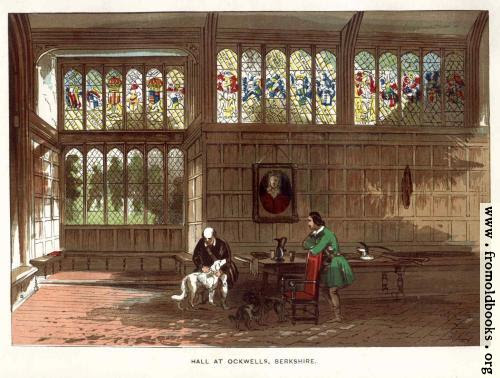 The Hall at Ockwells
From Charles Knight Old England: A Pictorial Museum 1845


The windows were removed for safety for part of the nineteenth century, and some losses have occurred to the original heraldry, and the name sof the bearers have also been lost.

The two windows in the body of the Hall show on the right the arms of John Norreys and his first wife, and his Berkshire connections, and on the left his arms impaling those of his second wife and his Worcestershire connections.Behind the glass has Norreys' motto "Faithfully Serve" and his badge of three distaffs. Along with the arms of the King and Queen only Norreys' own arms have supporters, who literally do so, hol;ding the shields up above their heads.

The bay window has at the side the mitred arms of the Abbot of Abingdon and of Bishop Richard Beauchamp of Salisbury, appointed in 1450, and there was once another ecclesiastical shield, possibly that of the Abbot of Reading. In the main section are the arms of the Duke of Warwick ( d.1446), of the Duke of Somerset (killed in 1455 at the first battle of St Albans), Queen Margaret, who married the King in 1445, the Duke of Suffolk (exiled and murdered in 1450), King Henry VI and the Earl of Wiltshire and Ormond (executed by the Yorkists in 1461). Our guide, Anne Darracott, who has done extensive research on the glass thinks the window commemorates the negotiations leading to the royal wedding, and the wedding itself, in which many of those whose arms appear were major participants.

The crowns and mitres are "jewelled" with the glass indicating the stones set into that of the insignia, and similar to glass in the Beauchamp chapel at Warwick, built after 1439.

I knew the glass from photographs, but to actually see it was privilege I very much appreciated.  A visit to Ockwells, despite all the changes of five and half centuries, does admit one to the world of the rising courtier John Norreys, his fine house and service buildings, his friends and connections and the great ones he met with in his life at Court around 1450.