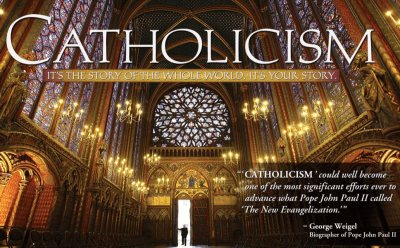 Following the popularity of the Evangelium course last year the Oxford Oratory is showing the highly-acclaimed film series Catholicism presented by Fr Robert Barron, on Saturday mornings at 11am. This started last week, when I was unable to attend, but after Mass this morning I did manage to get to see the second installment, which was on Our Lord's teaching and words.

The programme was very well made, with some fine camera work, and Fr Barron's presentation and xposition clear and coherent.  There was so much in it that at time one felt it needed to go a little more slowly to take in all he was saying. I think to get the most out of the series you would want to watch the films more than once, or watch at home and press the pause button as necessary to take in what is being presented to you.  To British ears there were perhaps a few Americanisms that grated a little, but the overall result is impressive and thought provoking. I am not sure if I can get to all the sessions, but I will certainly aim to get to as many as I can. On the basis of what i have seen this morning I would recommend it to groups and individuals.

In addition to the DVDs there is a book to accompany the series. There is an introduction to Fr Barron himself here.


There are ten DVDs which will be shown in Oxford weekly up to  Saturday 22nd March. Each session will conclude with questions and a discussion. As with Evangelium there will be tea and coffee served in the Parish Centre from after the 10am Mass until 11 o'clock.

Fr Barron speaks ill of our glorious Crusades and Holy Inquisition, and expresses the (delusory, unscriptural) hope that all men will be saved. The series should come packaged with a spiritual health warning.

I was only commenting on the episode I saw, which did express occasional points one might take issue with, but the overall substance was good.