Following the 11am Mass at the Oxford Oratory yesterday there was the unveiling in the parish social centre of a painting of Bl. Salvio Huix-Miralpeix, beatified last year, and the first Oratorian to be formally recognised as a martyr. The portrait has been commissioned by the Fathers of the Oratory for the church. 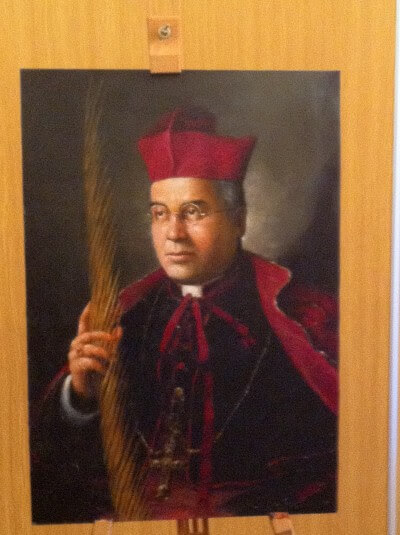 The portrait on its easil

The artist is Alvin Ong who is studying here in Oxford at the Ruskin School of Art. He worked from a photograph, but instead of full choir habit depicted the Bishop in habitus Piano and added the palm of martyrdom. The pectoral cross and ring are those of Bl. Salvio, who had sent them to Pope Pius XI in anticipation of the fate which befell him in 1936.

There are more pictures of the occasion and information about the artist and the picture on the Oratory website at New painting unveiled.

I'm praying with this saint* and I made a pray to him and a novena of prays to win a blass of him
Can i to share it with you?