The Dominican Spirituality of preaching

The Anglican parish church of St Giles here in Oxford has an establishe dtradition of offering a series of talks each Thursday lunchtime during the University term which look at religious themes and usually draw upon the academic community in the city to give these addresses, so they are usually of a high standard.  The other year they gave term over to considering with monks from Belmont abbey the Benedictine tradition and this term they are looking at the Dominicans with lectures by members of the Oxford Blackfriars community. 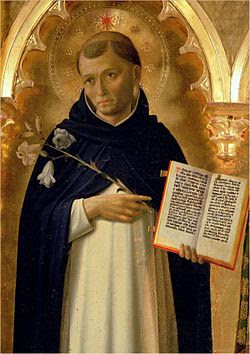 Last week the first talk in the series was an illustrated one given by Dr Nicholas Gendle on Fra Angelico, but unfortunately I had to miss that.

Yesterday the speaker was Fr Simon Gaine O.P., Regent of Studies at Blackfriars in Oxford. As one would expect it was a clear, cogent and insightful talk on the Dominican spirituality of preaching. He defined spirituality as one of the ways by which the individual make stheir way to God, and that for Dominicans, the Order of Preachers, preaching was at the centre of this process.

When the Order was established, about 1216 this was novelty - preaching was seen as the responsibility of Bishops, and not of the parochial clergy. It had been about 1203 when travelling with his Bishop, Diego, through southern France on a diplomatic mission to Scandinavia, that Dominic, a canon of Osma, encountered the Albigensians with their Cathar beliefs. Realising the need to proclaim a view of the world as essentially good and created by God, a God who had become Incarnate, Dominic began to seek to convert them. Hi sown prayer is recorded as involving his own material nature, bowing, kneeling, genuflection and prostration.


In his mission Dominic saw the need to assert the Truth against error , not to stir up debate in itself but to discover it and set people free from falsehood.

This search for Truth was linked to compassion - it is after all an action of mercy to share the Truth. Dominic's own compassion can be seen in his sale of his books as astudent to provide food for the hungry during afamine and in his wish at one point to sell himself into slavery to redeem other Christians captured by Muslim slavers.

The Order was conciously founded for others, not to establish a safe place for its members to live and pray as with enclosed orders, but to be useful for others. In a dream St Dominic saw other monastics crossing a river on boats whilst the Dominican had to swim across turbulent waters dragging a boat with others in it.

By now Dominic was aware not only of  the heretics in southern France nut also ofpeoples such as the Tartars who had not heard of Christ. By about 1215 he and his recruits had a house in Toulouse, but from 1216 they were recognised as an Order by the Papacy and the founder had a vision when in Rome of St Peter and St Paul which made clear the need for a universal mission for his community, and taht this required mobility. In the light of the regulations enacyed by Lateran IV the community adopted the Rule of St Augustine for Canons - something Dominic himself was - and as it was the shortest of the Rules, they were able to add on to it their own constitutions.

Preaching was not just to be homiletics but also study and debate in the quest for Truth. Engaging in debate with the Cathars St Dominic and his opponants on one occasion could find no means of agreement but resorted to a trial of their books by fire - and Dominic's books leapt out of the flames: 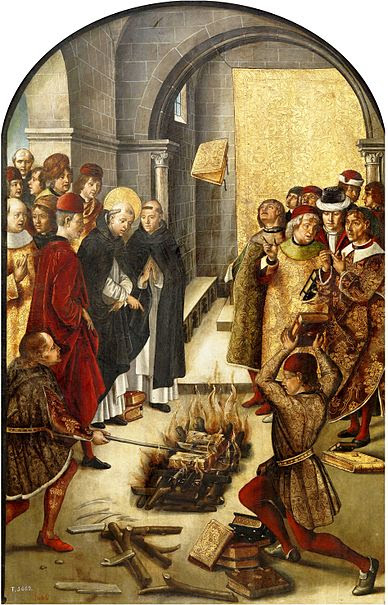 
Fr Gaine added that he had seen depictions of this story captioned as St Dominic burning heretical books rather than the actual story of resolving by extraordinary means a scholarly debate.

The tradition of debating to ascertain the Truth attracted Dominicans to the universities of medieval Europe - Bologna, Paris and in 1221, just at the time of Dominic's death, to Oxford. In these scholastic debates points were refined to determine the genuine differences of opinion and to seek agreement. In later centuries the Dominicans developed a tradition of public debate between members to elucidate points of doctrine.

At the time of the oundation of the Order the call to an Apostolic life of poverty was strong and this was adopted by St Dominic - the Albigensian perfecti attracted followers by their own austere lifestyle an dthis had to be matched by their opponants. A group of Cistercian abbots who preached against th heresy found they made no impact in that they were seen as too remote and who having onc epreached rode away. Dominic and his followers engaged with individuals and travelled on foot. From the perfecti
Dominic took over the distinctive black cappa, which gave the order its appellation of Blackfriars. However  the issue of a mendicant lifestyle did not pose the problems for the Dominicans that it was to do for the Franciscans and their concern for absolute poverty. St Dominic had no problem with the friars owning their own priory, but insisted there should be no rental income, and in 1217 they renounced receiving tithe payments, and further consolidated their position in 1219. This system had to be adapted after the Black Death, but they still essentially subsist on offerings.

In the thirteenth century the Order attracted such luminaries as St Albert the Great and St Thomas Aquinas, whose Summa Theologica was intended as a guide  for the central task of preaching. This saw all knowledge as a unity, an indication of that Truth which the Order exists to serve.

This was a really very fine talk by Fr Gaine, and one which I hope served to introduce the Dominican tradition and ideal to members of other Christian traditions.