I have been meaning to finish writing this post for ages, and over the Christmas and New Year holiday I have found both my notes and the opportunity - and could just about decifer my handwriting on several scraps of paper. Last year in January I went to meeting of the Oxford Bibliographical Society to hear a lecture on "The Earliest English Royal Books" given by Prof. Richard Gameson from Durham University, and it was one of the most interesting and insightful lectures I have ever had the good fortune to hear.


The topic had arisen as a presentation he had made to the British Library in connection with the planning of their recent exhibition on the Old Royal Library, presented by King George III to the British Museum, and in it Prof.Gameson had outlined the importance of royal patronage of books in the Anglo-Saxon era. This he now presented to his hearers in Oxford with clarity, profound knowledge and understanding, as well a delightfully eccentric line in humour.

He began by referring to the earliest surviving catalogue of English Royal books, that of 1535, when the Royal library of 143 books was at Richmond Palace, and was a collection stemming from 1479 when it was inaugurated by King Edward IV. This leads to questions as to whether such catalogues do record the real range of books available to medieval monarchs and princes, and how books were categorised.

With the Anglo-Saxon world we have no Ex-Libris or library lists, and on a palaeographic approach the historian is more concerned with the scriptorium than with the owner. Furthermore there is a poor survival rate for books from this period.

The earliest English royal books of whose existence we can be certain are the service books of the chapel established about 580 for the Christan Queen Berth when she married the still pagan King Ethelbert of Kent. In the context of the life of the royal household such establishments did not necessarily mean that the kings were literate, but rather, as with the early law codes, that this was a society that was using the written word.

In the following century the scholarly King Aldfrith of Northumbria (685-704/5)possessed books, and collected them - we have record of his exchanging land for a Codex. With St Aldhelm (639-709) we have an intellectual of royal birth who goes into the Church, became an Abbot and then Bishop, and it is possible to reconstruct his library from references in his works, although none of his own manuscrpts survive.

Bede sent books to his King  and the court was a clearing house for such things. The King of East Anglia commissioned Felix's Life of St Guthlac. King Offa gave a Bible made at Jarrow to the cathedral at Worcester. Kings redistributed books around their realms.


Queen Osburgh is said to have encouraged the literary interests of her most famous son King Alfred (871-899), and he was certainly personally literate in later life. As King he gathered scholars around him and encouraged the copying and distribution of texts.

By his time it is possible to distinguish three classes of royal manuscripts - personal possessions for prayer and study or a life such as that by Asser, official texts such as law codes in Latin or Old English which were central to governance, and manuscripts that came into and went again from the king's possession.

Asser records that King Edward the Elder (899-924) owned books and learnt the psalter, and carried the collection forward to the next generation.


From the reign of his son King Athelstan (924-939) two manuscripts are known from his court, and we know of six or seven gifts he made to monasteries where they survived.


Unfortunately the Cottonian fire of 1731 claimed one with an illumination of the King with St Cuthbert, but the other example happily survives:


In the painting the saint is shown blessing the King who is reading - rather than presenting the book to Cuthbert - and the King is shown as literate, a man well able to exercise rulership.

I should add that Prof Gameson did offer an alternative interpretation of the picture - King Athelstan is offering a box of chocolates to the saint and saying "Personally I don't like the strawberry cremes" - I think that academic joke is now inextricably fixed in my mind with this famous depiction of Anglo-Saxon kingship.

To return to serious matters - the suggestion was made that King Athelstan saw books as diplomatic currency, and that it was the role of the King to give such books away to those who would use them.

His nephew King Edgar (957/9-975) is known to have presented a Gospel Book to the monastery at Ely and the two illustrated Canterbury copies of the Regularis Concordia are probably royal dedication copies: 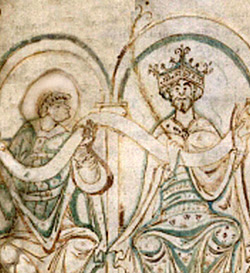 King Edgar and St Dunstan from the Canterbury Regularis Concordia


The other famous contemporary manuscript depiction of King Edgar is the Winchester New Minster charter, probably commissioned by Bishop Aethelwold, but with the King's approval:

No books are recorded from the household of King Ethelred II (978-1016), but his eventual successor and supplanter King Cnut had a sacraments and psalter which was given to him by a monk of Peterborough, and which the King gave to Cologne. Emma of Normandy, Queen to both these Kings is known to have owned books and was the recipient of the Enconium Emma Reginae, as can be seen here:

Queen Emma is presented with the Enconium Emma Reginae
Her two sons, the future King Harthacnut and King Edward the Confessor, are peering round the curtain

Queen Edith had a life of her husband King Edward the Confessor, Kings William I and William II are known to have given books to continental monasteries and King Henry I gave books to Waltham abbey, including one by Adelard of Bath.

Prof. Gameson then proceeded to look analytically at these books. In terms of quantity he had looked at eighteen individuals at fifteen courts, and he considered the evidence far from negligible as to royal ownership of books and comparable to what is known from the continent for the period. Given the passage of time this was not a bad survival rate for acytual manuscripts or for knowledge of books which no longer survive. King Aldfrith and King Alfred may have been exceptional but royal books were significant throughout the period.

The range was not easy to assess. Church books one would expect and they would be valued for their importance and quality. He believed there would have been a wide range of others, if only we could identify them. The Exeter Book from the reign of King Edgar is the type of book one might expect him to have had and the court or the Church a likely source.

Where these  royal books were made is unclear - as on the continent there is little evidence. Charlamagne and Lothair had a court scriptorium. There is nothing to distinguish such a source from a monastic one. King Alfred may have had such an institution in the latter part of his reign and King Athelstan had ascribe who wrote books. Much of the products of such work would have been legal texts, handbooks and also annals.

Royal imagery has survived in some manuscripts such as the New Minster charter depiction of King Edgar whilst the image of Queen Emma from the Enconium was rarer. The earliest known is that of King Athelstan with St Cuthbert, and that was sixty to seventy years earlier than continental examples. These all suggest royal appreciation of the importance of books and can be seen as part of the Alfredan inheritance.

One of the key points made was that royal books were regularly given away, and we know of these gifts from the records of the recipient monasteries. It was of the nature of royal collections for their contents to be transitory. It was seen as a charitable and pious thing to make texts available to those who could use them - the King was an educational benefactor by giving books to monks and churches. This approach may well have lain behind the great Library of King Charles V of France (1364-80) whose more than 917 volumes were later transferred by John Duke of Bedford to London and dispersed. I would add that that would also be a motivation for Duke Humphrey's great gift to Oxford of the latest classical texts in the 1430s - they were collected to be passed on for wider use, not hoarded as a private collection.


Anglo-Saxon royal books can be classified by type. Firstly there are those from the chapel - missals, homilies, both old and new, and which were in the care of the chaplains. Secondly there were reference works - law books, the text of the Anglo-Saxon Chronicle, educational texts such as those copied under King Alfred. Thirdly there were individual possessions, which would obviously would vary with the different interests of individual owners. Fourthly there were royal gift books of high prestige - including ones which might have been encouraged an outside scriptorium to produce.

We may have little hope of identifying individual manuscripts as parts of an Anglo-Saxon royal collection. For later centuries there is more hope of identifying owners, but Prof Gameson considered what had once existed as significant as later collections, and maybe more important than that of the Norman kings. The importance of the King and court as a centre of textual distribution was striking. it is difficult to measure the success of such gift giving, but distribution was seen as preferable to hoarding.


All in all a wonderfully stimulating and informative lecture, which I hope I have done at least some justice to in these notes.

I continue to enjoy your blog. I don't now if you saw the two programmes this week on Alfred:
http://www.bbc.co.uk/iplayer/episode/b03sbp73/The_Search_for_Alfred_the_Great/
and
http://www.bbc.co.uk/iplayer/episode/b03816y5/King_Alfred_and_the_Anglo_Saxons_Alfred_of_Wessex/
but as I recall the inference was that some of the texts shown were annotated in Alfred's own hand?
Perhaps you could shed more light on this?
Kind regards,
John