John Shinners posted this piece on the Medieval Religion discussion group the other day as part of a continuing discussion about medieval felines and evidence of their various, usually unfriendly, activities in medieval manuscripts. It comes from the Medievalfragments blog for this time last year and I thought I would copy and paste it in its entirety. The original link is here. Whether you are an animal lover or not the examples given are rather entertaining and enlightening:

Today’s blog is a guest post from Thijs Porck, a lecturer in the Department of English Language and Culture, Universiteit Leiden.

This week Erik’s tweet on cat-paws in a fifteenth-century manuscript went viral across facebook and the twittersphere when it was shared and commented on by thousands. Follow @erik_kwakkel  today for more animal-themed tweets #manuscriptzoo

Everyone who has ever owned a cat will be familiar with their unmannerly feline habit of walking across your keyboard while you are typing. One of the manuscript pictures tweeted by @erik_kwakkel (http://twitter.com/erik_kwakkel/status/303614922103865346/photo/1 ) revealed that this is nothing new. 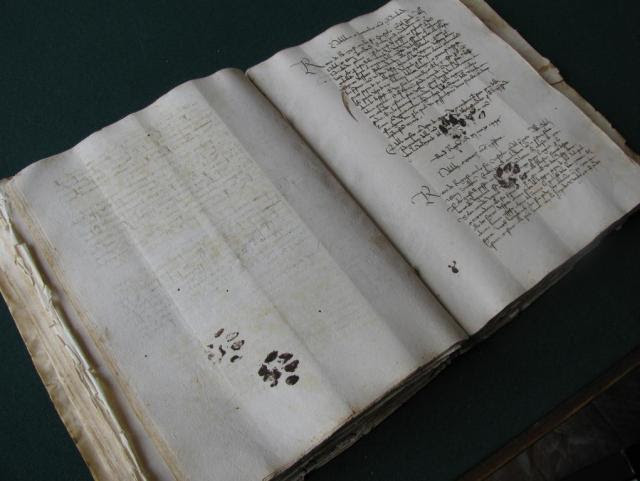 Although the medieval owner of this manuscript may have been quite annoyed with these paw marks on his otherwise neat manuscript, another fifteenth-century manuscript reveals that he got off lucky.  A Deventer scribe, writing around 1420, found his manuscript ruined by a urine stain left there by a cat the night before. He was forced to leave the rest of the page empty, drew a picture of a cat and cursed the creature with the following words:

[Here is nothing missing, but a cat urinated on this during a certain night. Cursed be the pesty cat that urinated over this book during the night in Deventer and because of it many others [other cats] too. And beware well not to leave open books at night where cats can come.] 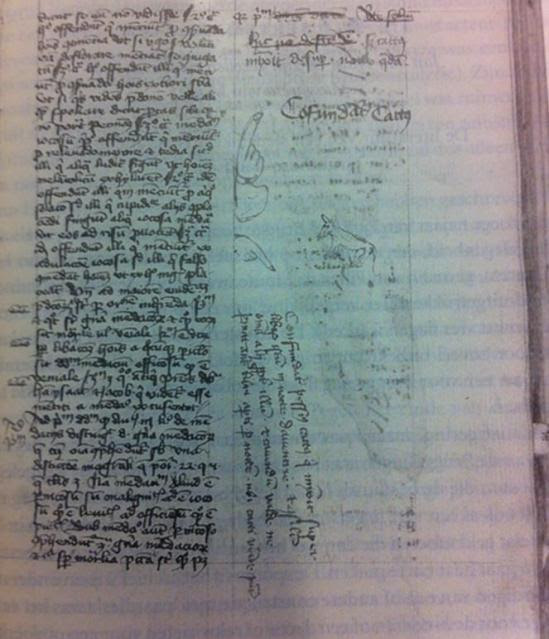 Given their inclination to defile beautiful books, why were cats allowed in medieval libraries at all? A ninth-century poem, written by an Irish monk about his cat “Pangur Bán”, holds the answer:

I and Pangur Bán my cat,
‘Tis a like task we are at:
Hunting mice is his delight,
Hunting words I sit all night.

(You can read the full poem here.  Other musings on this poem from this blog can be found here)

The cats were there to keep out the mice. For good reason, because a medieval manuscript offered a tasty treat for the little vermin, as this eleventh-century copy of Boethius’s De consolatione philosophiae illustrates. The manuscript has been all but devoured by rats and mice and every page shows the marks of their teeth. 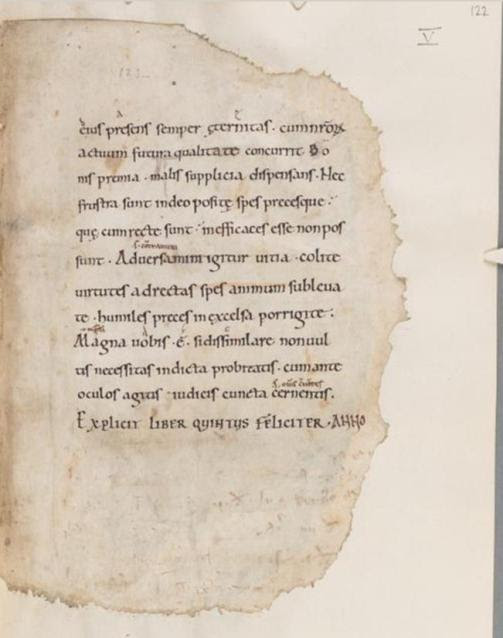 Aside from their book-endangering eating habits, mice could be an annoying distraction, as illustrated by the twelfth-century scribe Hildebert. The illustration shows how a mouse has climbed up Hildebert’s table and is eating his cheese. Hildebert lifts a stone in an apparent attempt to kill the mouse. In the book that he was writing, we find a curse directed at the cheese-nibbling beast: “Pessime mus, sepius me provocas ad iram; ut te deus perdat” [Most wretched mouse, often you provoke me to anger. May God destroy you!] 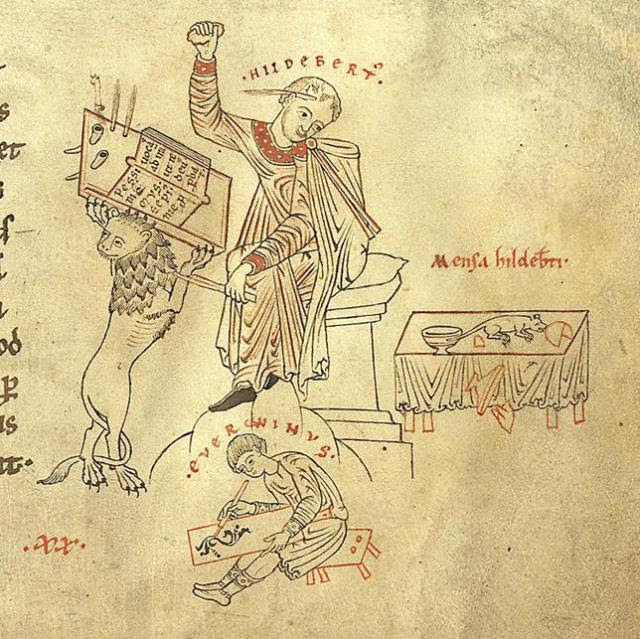 So, while at least two cats are responsible for leaving their unwanted marks on manuscripts, the cat’s mouse-catching abilities may have saved a large number of manuscripts from ending up in a mouse’s belly and may have enabled many a scribe to focus on his work, knowing that his lunch would remain untouched.