Medieval textiles for auction in Oxford

The other day Fr Tim Finigan had a post about Campaign to buy Sawston Hall and make it a Catholic heritage centre, which seems to be a very worthwhile project. Yesterday I found out, coincidentally, that two embroideries once at Sawston are on sale today at an aution at Mallams, the long established Oxford auction house.  They now form altar frontals but are made from old vestments, and I hope they will be secured for a suitable public or church  collection. Here is the description taken from Mallam's online sale catalogue - with additional comments by myself in []: 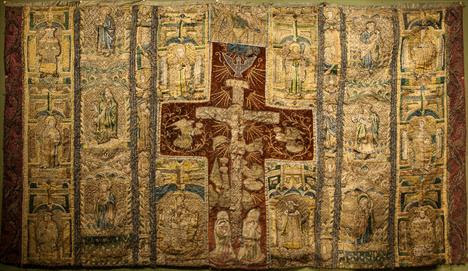 An Altar frontal made up of embroidered orphries with saints in arcades and a large cross-orphrey with a Crucifixion; the embroideries range from the late thirteenth century to the sixteenth century. They are mounted on red silk, and bordered with two different widths of later, possibly eighteenth century, silver lace, 92 cm x 166 cm (through glass) in a gilt display case with removable front, 114 x 186cm.

In the centre: At the top: The Virgin and Christ Enthroned. Both Christ and the Virgin, dressed in gold mantles, wearing crowns, fifteenth century. Christ is blessing the Virgin with his right hand (this is not a representation of the `Coronation of the Virgin` as Mary is already crowned). Two gold crowns are visible on Christ`s head, and it is possible that he originally wore a triple-crown tiara, but the top of this scene has been cut down. One unusual feature of the iconography is that Christ wears the crown of thorns beneath his gold crowns.

Middle: on a deep burgundy velvet ground, the Crucifixion: Christ on the Cross with angels catching the blood flowing from his wounds in chalices, fifteenth century. At the foot of the cross, on either side, there are two embroidered figures of the Virgin Mary and St John the Evangelist. They are finely embroidered, and come probably from a cope or altar frontal with a design of figures set within barbed quatrefoils frames, as traces of a frame can still be seen. Part of a scrolling leaf design can be glimpsed above each of the figures. These two figures are finely embroidered in silk, with tiny, form-following stitches, set on a ground of underside-couched, very worn metal thread. These are the earliest fragments of embroidery on this altar frontal, possibly dating from the late thirteenth century.

On the velvet cross-orphrey: Crucifixion: The figure of Christ, embroidered in coloured silks, with gold thread details in his Crown of Thorns, is applied to a cross which has couched laid gold thread, forming a pattern more often seen on the background of embroideries. Above the Crucifixion: the Holy Spirit in the form of a Dove, in laid and couched silver filé thread, outlined in silver filé twist. There are also radiances of light, formed of couched gold thread, with gilt spangles. Above and below the cross-bars of the Crucifixion: Left: a white-haired bearded saint, holding a book in one hand and possibly some keys (hard to see) in the other, possibly St Peter, third quarter of the fifteenth century. Below him: the Virgin and Child enthroned. Right: an unidentified saint, holding a branch (or small tree?) and below, a prophet. At the bottom edge of the altar frontal: spaces have been in-filled with portions of embroidered grassy meadows, taken from orphrey panels. 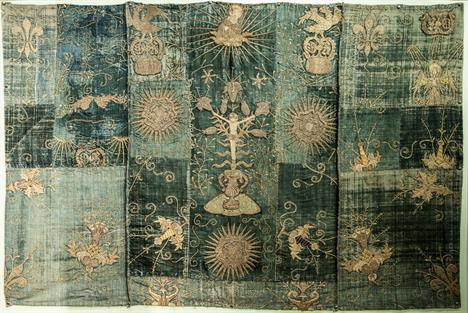 An Altar frontal made from fragments of a deep blue velvet cope, with embroidered motifs in coloured silks and couched gold and silver thread, 156 x 101 cm (through glass) in a pine display case with removable front, 122 x 178cm.

The embroideries represent: a large, central Lily Crucifixion, with God the Father above, surrounded by motifs of waterflowers, fleurs de lis, roses en soleil, part of two cherubim, and rebuses consisting of a falcon on a barrel, with a large letter M framing smaller letters D and R. This could possibly refer to a `Dr Morton`, from Mors, Latin for falcon, on a tun or barrel. [I would suggest it is the eagle of St John the Evangelist standing on top of the letters Mor and a tun as a rebus for John Morton - Clever Boy] May this rebus refer to the future Cardinal John Morton (d. 1500), in his early career, as Dr John Morton (i.e. as a doctor of Law, before he became a bishop?). He was educated at Balliol College, Oxford, where he graduated in law; among many other ecclesiastical preferments, he became Archbishop of Canterbury in 1486 and Cardinal priest of S. Anastasia in Rome in 1493. Because of the presence of the rose en soleil badge of Edward IV, the cope may have been commissioned during the period in which Morton was in the service of Edward IV (he was, for example, sent as ambassador to the French court by Edward IV 1477; it was under Edward IV that he became Bishop of Ely in 1479). [ Sawston is, of course, in the diocese of Ely - Clever Boy]

[There are early fifteenth century paintings of the Lily Crucifixion in the church at Godshill in the Isle of Wight, in the church of St Helen in Abingdon and in St Michael at the Northgate in Oxford - Clever Boy]

The descriptions of the two preceding lots are taken from notes prepared by Lisa Monnas of the Victoria and Albert Museum to whom we express our gratitude. We also offer our thanks to Dr Jon Whiteley of the Ashmolean Museum for his assistance in this matter.

Text and images: Mallams
Posted by Once I Was A Clever Boy at 09:46