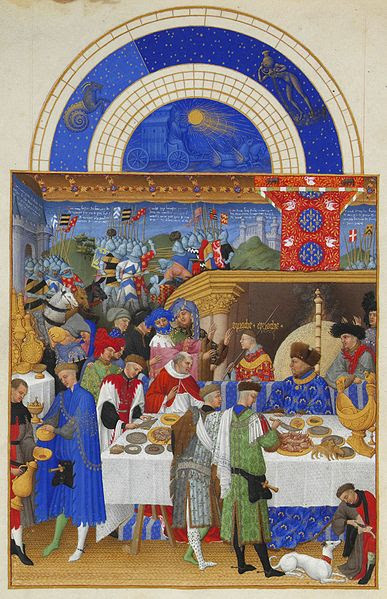 The Duke of Berry (1340-1416), of whom there is an online biography here, is depicted dressed in blue and wearing a livery or chivalric collar and seated to the right, and wearing a handsome fur hat to indicate his status, celebrates the Christmas and Epipany seasons. There appears to be the exchange of gifts - New Year or Epiphany ones - and a cultivated and splendid lifestyle. This is a pattern which would have been replicated or emulated across Europe in royal and aristocratic households.
The importance of the Duke is further indicated by the canopy and cloth of estate with his arms above his head. The tapestries or hangings with their battle scenes which decorate the room are a further sign of wealth. They would have travelled with the household and been hung to decorate whichever residence was in use at the time. What today might appear the rather stark interior of later medieval residences  could have rapidly been transformed by such wallhangings - which also would have provided insulation. A superb contemporary set which depicts the Apocalypse have survived and can be seen at Angers in the castle. In a similar way the trestle table once covered with a fine linen cloth assumes far greater dignity.

The firescreen is also an interesting feature, as is the woven rush matting - rushes on the floor clearly did not mean a strewn hay stack as one might be led to believe, but a fitted covering in such a grand household. Similar floor coverings can be seen today in some National Trust properties such as Hardwick Hall in Derbyshire.
On the left is a sideboard or buffet with a display of gold plate as was expected on such occasions to display princely magnificence, and other splendid plate is in use at the feast, as well as an aquamanile for washing the hands of those dining at the table. The pieces shown are very similar to the relatively few surviving examples from the period in museums and collections such as those of the Oxford and Cambridge colleges. My post The Royal Gold Cup is about another surviving piece, now in the British Museum, of such splendid plate which is specifically linked to the Duke and his nephew King Charles VI.


The whole scene is redolent of courtly life, well mannered, polite, fashionable and stylish - even the greyhound has an air of elegant langour.
The painting is attributed to the artist identified as the 'the courtly painter'.

The effigy of the Duke in the cathedral of St Etienne in Bourges by Jean de Cambrai shows a great similarity to the figure of him in the illumination: 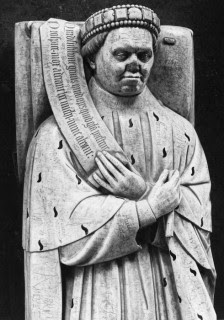 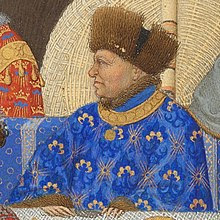