Today is the 125th anniversary of the death of Bl. John Henry Newman at the Birmingham Oratory in 1890 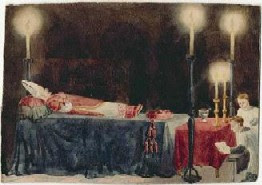 Cardinal Newman lying-in-state in the Oratory Church, Edgbaston, prior to his Funeral Mass on Tuesday 19 August 1890.


Recently I was asked to answer, as someone who worships at the Oxford Oratory, and who is a Brother of the Secular Oratory, four questions to illustrate or illuminate a school project comparing and contrasting St Philip Neri and Bl. John Henry Newman, and I  thought readers might be interested to see my answers to those:

1) What do you find inspiring in the example of St Philip Neri?

I think what is most inspiring is to understand that it is not the stories of him as practical joker that matter as the "Saint of Joy " but his profound closeness to God - above all in the indwelling of the fire of the Holy Spirit from Pentecost 1544 - and the way in which he brought that Divine Love to the people of Rome. It proved so very attractive to so many.

2) What do you find inspiring in the example of John Henry Newman?

As a convert from Anglo-Catholicism myself ( sand a member of Oriel ) it is first of all his example of pursuing his pilgrimage of Faith, and what an extraordinary journey that was. His intellectual honesty and his concern for souls are also very important, as is his determination to hold to the path he had chosen.

3) What do you think they had in common?

I think that is both their adherence to their personal pilgrimage and their concern for saving souls, be they in Rome, Oxford or Birmingham

4) What do you think it means to be an Oratorian today?

As a Brother of the Secular Oratory and regular worshipped at the Oxford Oratory I think it is a case of living out and working out my own spiritual journey in the light of what they taught and did themselves, and of following on their footsteps - however falteringly. I esteem what they did and established, and in being grateful for that support their continuing legacy in terms of liturgical and devotional life as well as trying to show concern for those I meet in my life.