Before we leave St Dominic's current feast day I will share some further medieval images of  St Dominic which have been posted on the Medieval Religion discussion group site by John Dillon. I have opened some of the links:
a) as portrayed in an originally earlier thirteenth-century panel painting of Sienese origin (ca. 1235-1240; head reworked in its present form ca. 1280-1285) in the Fogg Art Museum, Harvard University, Cambridge, MA: http://www.harvardartmuseums.org/art/232018
b) as portrayed in relief by Nicola Pisano on panels for Dominic's sarcophagus (betw. 1264 and 1267) in what is now the central portion of the Arca di San Domenico in the basilica di San Domenico in Bologna:1) (lower register at right) miracle of the unburnt book: http://tinyurl.com/qzf2djk2) (central register, holding up the resuscitated Napoleone Orsini; this panel thought to be largely the work of Arnolfo di Cambio):http://tinyurl.com/nrjo3poc) as depicted (at right; at left, the martyrdom of St. Peter Martyr) in the late thirteenth-century Livre d'images de Madame Marie (ca. 1285-1290; Paris, BnF, ms. Nouvelle acquisition française 16251, fol. 93r):http://tinyurl.com/ylfo3wnd) as depicted (being blessed, along with the brethren, by Honorius III) in a late thirteenth-century copy of French origin of the Legenda aurea (San Marino, CA, Huntington Library, ms. HM 3027, fol. 91v; image greatly expandable):http://digitalassets.lib.berkeley.edu/ds/huntington/images//000941A.jpge) as depicted (at left; at right, St. Francis of Assisi) in the frontispiece to an late thirteenth- or early fourteenth-century hymnal of German origin (New York, Pierpont Morgan Library, MS W.24, fol. 1v): 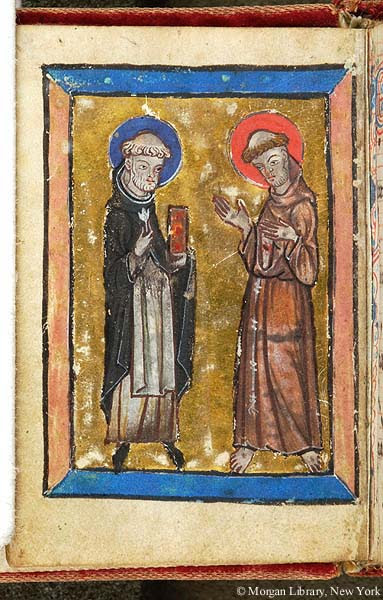 http://www.wga.hu/art/m/master/zunk_sp/zunk_sp1/06domini.jpg
g) as depicted (scenes) in a leaf from the earlier fourteenth-century Hungarian Angevin Legendary. Made in Bologna, Italy or Hungary.Perhaps commissioned by King Charles Robert of Anjou, King of Hungary (1292-1342) ;other suggested patrons are CsanaÌd Telegdi, a bishop in Hungary, and Jacob of Piacenza, a royal doctor and bishop of CsanaÌd.  (ca. 1325-1345; New York, Pierpont Morgan Library, MS M.360.26): 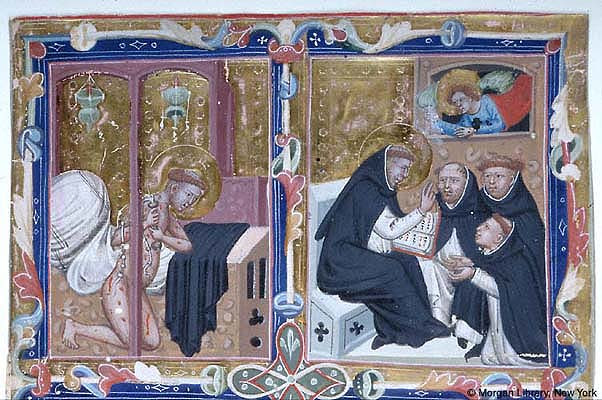 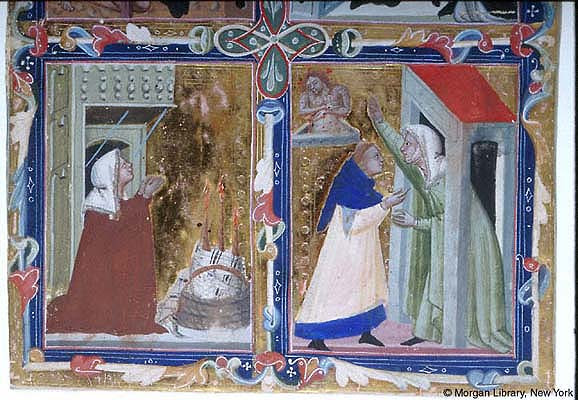 Zone 1:
1) Dominic of Bologna: Scene, Self-Punishment -- Dominic of Bologna, nimbed, tonsured, nude, bleeding, kneels before bed and whips himself with scourge in both hands (flagellation), before robes laid out before him. Two lamps hang from ceiling.

2) Dominic of Bologna: Scene, addressing Monks (?) -- Dominic of Bologna, nimbed, tonsured, in Dominican habit, sits with book in lap and right hand raised in blessing before three kneeling tonsured Dominicans. Nimbed angel, with object in right hand, looks down on them from window. k) as depicted (various scenes) by Beato Angelico in the predella of his earlier fifteenth-century Coronation of the Virgin in the Musée du Louvre in Paris (earlier 1430s or perhaps 1450; individual predella images expandable from menu below the view of the painting as a whole):http://cartelfr.louvre.fr/cartelfr/visite?srv=car_not_frame&idNotice=1197l) as depicted (at right, flanking the BVM and Christ Child; at left, St. Zenobius of Florence) by Beato Angelico in an earlier fifteenth-century fresco (ca. 1437-46) in the Museo nazionale di San Marco in Florence:

http://tinyurl.com/q7j7sdd
m) as depicted (his celestial vision; his meeting with St. Francis of Assisi) by Benozzo Gozzoli in a mid-fifteenth-century fresco (1452) in the apsidal chapel of the chiesa di San Francesco in Montefalco: n) as depicted (resuscitating Napoleone Orsini) by Bartolomeo degli Erri in a later fifteenth-century panel painting (betw. 1467 and 1474) in the Metropolitan Museum of Art in New York:http://www.metmuseum.org/collection/the-collection-online/search/435616o) as depicted (miracle of the unburnt book; his vision of heaven) in a later fifteenth-century copy (ca. 1480-1490) of the Legenda aurea in its French-language version by Jean de Vignay (Paris, BnF, ms. Français 245, fol. 23r):http://tinyurl.com/3gx7okf