The Assumption of the Blessed Virgin Mary


John Dillon has posted on the medieval-religion discussion group the following, which I have very slightly edited and adapted:

Today, August 15th, is the feast day of:
1a) The Dormition of the Theotokos.
1b) The Assumption of the Blessed Virgin Mary.

As indicated by the entry in the early sixth-century Calendar of Carthage for an August feast of Mary among the Saints, these two closely related Marian feasts are probably at least as old as the later fifth century. Narrative texts providing diverging accounts of Mary's transit are known from at least the mid-fifth century onward; these will have stimulated a desire for formal celebration, despite whatever theological reservations such writings will have evoked (e.g. a book called_The Assumption of Holy Mary is among the apocrypha specifically rejected in the sixth-century Decretum Gelasianum). A major study of these early texts, with English-language translations of them, is Stephen J. Shoemaker, Ancient Traditions of the Virgin Mary's Dormition and Assumption (Oxford Univiversity Press, 2002).

In some places in late antiquity (e.g. Egypt, Arabia, Gaul) the feast in question took place in January; in others (e.g. Palestine) it was kept in August, though not always on this day: the aforementioned Calendar of Carthage has it on August 12th. The Emperor Maurice (d. 602) is reported to have established it for the empire as a whole as falling on  August 15th. In Thessaloniki, at least, the observance seems to have begun only in the time of its earlier seventh-century bishop John (610-649), to whom we owe the oldest surviving Greek-language sermon for this feast.

Differences in emphasis led early to the feast's being called in Greek that of the Dormition (Koimēsis; 'Falling Asleep', a metaphor for death), beginning with Mary's death (in what became the standard view for medieval Hellenophones, her soul ascended immediately and her body was taken up after its burial), and, in Latin, that of the Assumption (a term that avoids declaring a position on Mary's physical state upon her entry into Heaven). As the divergent narrative constructions and theological interpretations have hardened over time, it has become customary to speak -- in modern contexts, at least -- of two feasts rather than of one.

A late nineteenth-century translation into English of the three sermons by St. John of Damascus on the Dormition of the Theotokos is here:
http://legacy.fordham.edu/halsall/basis/johndamascus-komesis.asp


A few period-pertinent representations of Mary's Dormition and/or Assumption, supplementing those in various media accessible at Genevra Kornbluth's Archive page dedicated to the Dormition, Assumption, and Coronation of the Virgin at: www.kornbluthphoto.com/DormitionVirgin.html

b) The mid-twelfth-century Dormition mosaic (betw. 1146 and 1151) in the chiesa di Santa Maria dell'Ammiraglio (a.k.a. chiesa della Martorana) in Palermo: c) The Assumption as portrayed in relief by the Master of Cabestany on the later twelfth-century former tympanum (ca. 1150-1180) of the église Notre-Dame at Cabestany (Pyrénees Orientales) now in the Centre de Sculpture Romane "Maître de Cabestany" there: d) The Dormition as depicted (at far right) on a later twelfth-century iconostasis beam in the Holy Monastery of the God-trodden Mount Sinai (a.k.a. St. Catherine's monastery), St. Catherine, South Sinai governorate:
http://www.icon-art.info/hires.php?lng=en&type=1&id=3667

e) The later twelfth-century (1170s?) Dormition (right) and Assumption (left) reliefs on the lintel of the central portal of the west facade of Senlis' cathédrale Notre-Dame:

The tympanum relief above portrays the Virgin in Majesty:

f) The Dormition as portrayed in relief by Bonannus of Pisa in a panel of his late twelfth-century bronze doors (later 1180s) for the Porta San Ranieri of Pisa's cattedrale metropolitana primaziale di Santa Maria Assunta, and now in the Museo dell'Opera del Duomo there:
https://www.flickr.com/photos/44884174@N08/14405264453

g) The Dormition as depicted in a late twelfth- or early thirteenth-century icon from the Desyatinny monastery in Veliky Novgorod, now in the State Tretyakov Gallery, Moscow:
http://www.belygorod.ru/img2/Ikona/Used/257Uspenie12_13.jpg

k) The Assumption as depicted in the earlier thirteenth-century northern rose window (ca. 1230) of the basilique cathédrale Notre-Dame, Chartres:
http://manuelcohen.photoshelter.com/image/I0000zDh8M7xMONc

l) The earlier thirteenth-century tympanum relief of the Dormition (ca. 1240?) on the south portal of the basilique cathédrale Notre-Dame, Strasbourg: 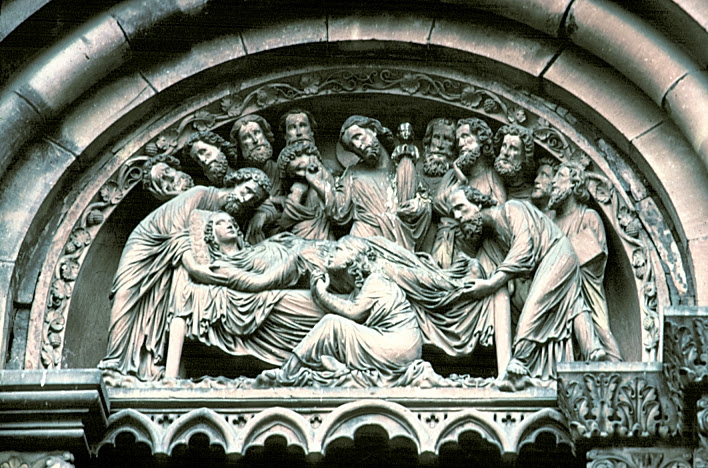 http://www.wga.hu/art/c/cavallin/mosaic/6scene.jpg
Detail view:
http://www.wga.hu/art/c/cavallin/mosaic/6scene1.jpg
The verse inscriptions for this cycle were composed by Cardinal Jacopo Stefaneschi, a brother of the donor; as this example shows, insufficient attention was given to insuring that the mosaicists would render accurately the written texts.

t) The Dormition as depicted in an early fourteenth-century fresco (ca. 1310) in the church of the Dormition in the Žiča monastery in Kruševica:
http://www.maletic.org/serbian-frescoes/single-gallery/2856690

w) The Assumption as depicted in an earlier fourteenth-century copy (ca. 1326-1350) of the Legenda aurea in its French-language version by Jean de Vignay (Paris, BnF, ms. Français 185, fol. 23r):
http://tinyurl.com/3namtmw

z) The Dormition as depicted in a mid-fourteenth-century (1348) copy of the Legenda aurea in its French-language version by Jean de Vignay (Paris, BnF, ms. Français 241, fol. 204r):
http://tinyurl.com/3za6eus

aa) The Dormition and Assumption as portrayed in high relief by Andrea Orcagna on his later fourteenth-century Tabernacle (1359) in Florence's chiesa di Orsanmichele:
http://www.wga.hu/art/o/orcagna/tabern_2.jpg

cc) The Dormition and Assumption as depicted in an early fifteenth-century missal for the Use of Gand / Ghent (Valenciennes, Bibliothèque de Valenciennes, ms. 122, fol. 27v):
http://tinyurl.com/qgnlm3z

ff) The Dormition as depicted by Andrea del Castagno in an earlier fifteenth-century mosaic (1442 or 1443) in the basilica di San Marco in Venice:
http://www.wga.hu/art/a/andrea/castagno/1_1440s/042dormi.jpg

gg) The Dormition and Assumption as portrayed in high relief by Veit Stoss in the central panel of his late fifteenth-century polychromed wood altarpiece (betw. 1477 and 1489) in the church of St. Mary, Kraków:

hh) The Assumption as depicted in a late fifteenth-century addition (1491?) in the guildbook of the London's Worshipful Company of Skinners' Confraternity of the Assumption of the Blessed Virgin Mary (London, Guildhall Library, MS 31692):
http://www.english.cam.ac.uk/medieval/images/full_p58_assumption.jpg

ii) The Assumption as portrayed in high relief by Tilman Riemenschneider in the central panel of his early sixteenth-century limewood altarpiece of Mary (ca. 1510) in the Herrgottskirche in Creglingen (Lkr. Main-Tauber-Kreis) in Baden-Württemberg:
https://www.flickr.com/photos/hen-magonza/9798485103
Many detail views here:
https://www.flickr.com/photos/gripspix/albums/

Gordon Plumb has also posted some Assumption images in glass plus one textile fragment:


Warwick, St Mary, Beauchamp Chantry, nIII, A1-A6:
This glass contains the opening part of the antiphon "Gaudeamus", which forms the first part of the introit appointed in the Sarum Gradual for the festival of the Assumption of the BVM.
https://www.flickr.com/photos/22274117@N08/4373047659