August 19th was the feast of St Louis of Toulouse. He was the second son of King Charles II of Naples and his wife, Mary princess of Hungary, daughter of King Stephen V, and a relative of both St Louis IX and St Elizabeth of Hungary (or Thuringia) - both of whom became Franciscan tertiaries. As the section on his ancestry in the online biography Louis of Toulouse shows - he was indeed a very well connected young man, related to most of the ruling houses of the period.

Drawn as the life above shows to be a Franciscan friar, following the death of his elder brother he renounced his rights of succession to his younger brother Robert and was professed in 1296 in Rome and ordained priest the following year. Pope Boniface VIII decided he should be promoted at once and so he was consecrated bishop of Toulouse a few days later. He had asked permission to resign his bishopic within months of appointment, but fell ill and died at Brignolles on August 19th 1297 at the age of only 23. He was canonised in 1317.

The popularity and appeal of Franciscan spirituality combined with his royal birth and renunciation of the possibility of kingship as well, no doubt, of his youth meant that his cult was considerable in the years following his death and canonisation. However I suspect that he is not well known in the English speaking world outside the Franciscan tradition.

A somewhat similar devotion arose a generation or so around the figure of the teenage Cardinal Bl. Peter of Luxembourg (1369-87) - for whom see  Pierre de Luxembourg

The popularity of St Louis' cult in later medieval Europe gave many outstanding contemporary artists the opportunity to depict him, and John Dillon has posted this very impressive collection of images of him on the Medieval Religion discussion group, ofwhich I have opened up many of the links to thbese beautiful works of art and devotion, and to which I have added occasional comments in [ ]:

a) as depicted (presenting a crown to his younger brother Robert) by Simone Martini in his early fourteenth-century altarpiece of Louis of Toulouse (circa 1318) formerly in the possession of Naples' Franciscan church of San Lorenzo Maggiore and now in the Museo nazionale di Capodimonte in the same city (four expandable images) [This is probably the most famous depiction of St Louis, and the closest in date to his death]: b) as depicted (at right; at left, St. Francis of Assisi) by Simone Martini in his early fourteenth-century frescoes of Franciscan saints (ca. 1318) in the transept of the lower church if the basilica di San Francesco in Assisi: 
c) as depicted (at right; at left, St. Louis, king of France) by Simone Martini in an early fourteenth-century fresco (ca. 1318-1320) in the cappella di San Martino in the lower church of the basilica di San Francesco in Assisi:

d) as depicted (bottom register at right; at left, St. Elizabeth of Hungary) by the Master of Figline in an earlier fourteenth-century panel painting (after 1317) ordinarily kept in the Museo d'arte sacra della Collegiata di Santa Maria Assunta, Figline e Incisa Valdarno (FI), Tuscany but from this past April until 11. October 2015 on display in the Galleria dell'Accademia in Florence as part of a special exhibition of early Franciscan art:

f) as depicted in an earlier fourteenth-century fresco (ca. 1320) in the cappella di San Ludovico in the former chiesa di San Marco in Salerno, now part of the Archivio di Stato in that city:

Detail of the figure:
http://digilander.libero.it/salernostoria/c8abateconfortipc%2002.JPG

g) as depicted by Taddeo Gaddi (attrib.) in an earlier fourteenth-century glass window in the basilica di Santa Croce in Florence (betw. 1328 and 1332; finestra s VIII, pann. a2):
http://www.icvbc.cnr.it/bivi/schede/Toscana/Firenze/8scroce1.htm

h) as portrayed in an earlier or mid-fourteenth-century statue (ca. 1330-1350) from the chapelle Notre-Dame de Rieux in Toulouse, now in the Musée des Augustins in the same city: 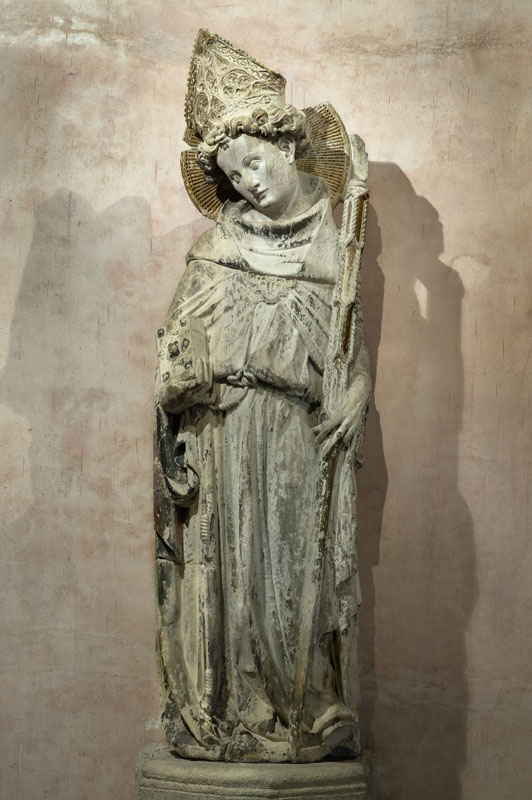 j) as depicted by Serafino Serafini in two later fourteenth-century frescoes (after 1375) in the chiesa di San Francesco in Mantua:
1) Louis' consecration by Pope Boniface VIII: 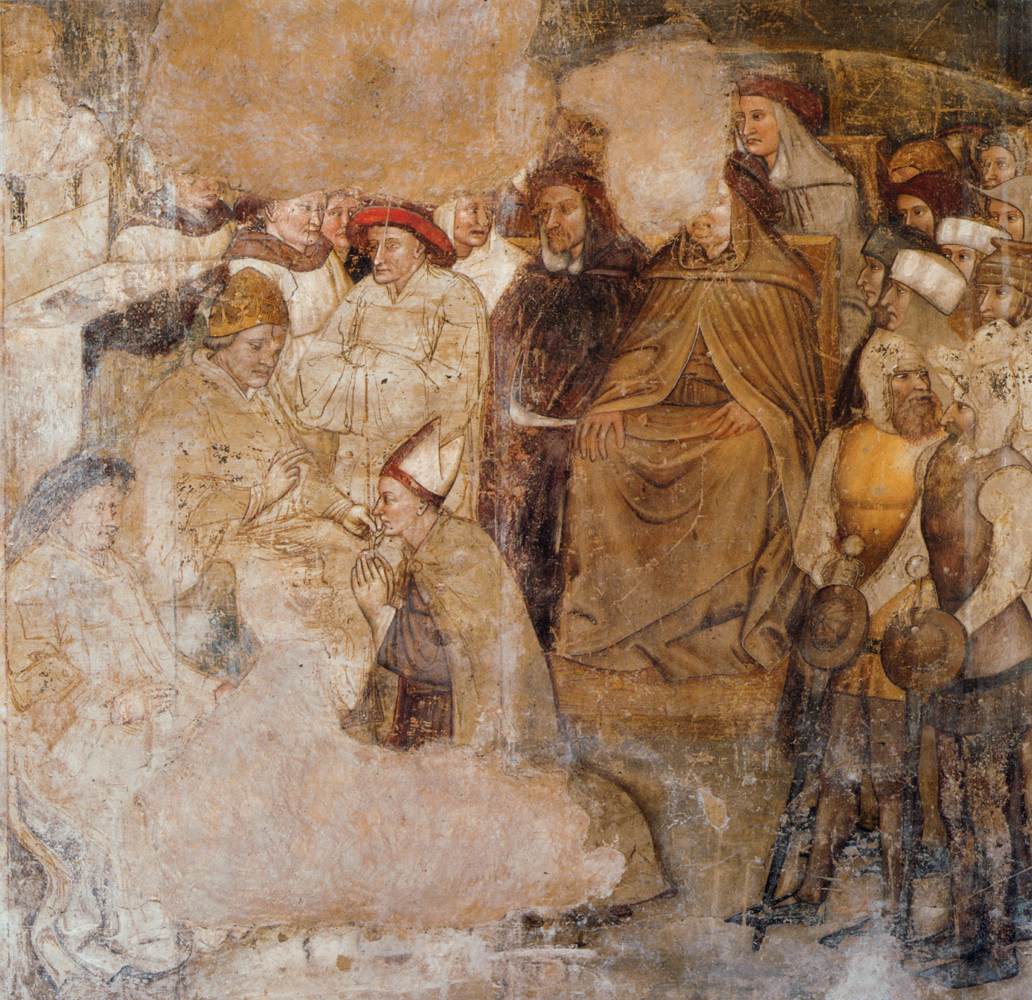 k) as depicted (at right; at left, St. John the Evangelist) by Tommaso del Mazza (formerly known as the Master of St. Verdiana) in a later fourteenth-century panel painting (ca. 1386) in the Museé du Petit Palais, Avignon:
http://tinyurl.com/qhwknz9

l) as portrayed in a late fourteenth-century polychromed wood reliquary bust (with gesso and gilding) in the Cleveland Museum of Art, Cleveland (OH):
https://www.flickr.com/photos/elizabethe/8601399429/
There are better photographs at the museum's own site (clevelandart.org) but that is being rebuilt at the moment (and the museum appears to have elected not to offer the public a copy of the older site on another server while the rebuilding is underway).

n) as portrayed in a fifteenth-century polychromed stone statue in the église Sainte-Radegonde in Giverny (Eure):
http://tinyurl.com/nted4cz

o) as portrayed in a fifteenth-century statue over the principal entrance to the chiesa di Sant'Alvise (i.e. Louis, in this case the present one) in Venice:
http://tinyurl.com/qelhbf9

p) as portrayed by Donatello in an earlier fifteenth-century gilded bronze statue originally made for the Orsanmichele in Florence (ca. 1413 or early 1420s) and now in that city's Museo dell'Opera di Santa Croce:
http://www.wga.hu/art/d/donatell/1_early/orsanmic/2louis_1.jpg
Detail views at http://tinyurl.com/99sr3wt ,[ of which I have selected one]: q) as depicted (at right; at left, St. Francis of Assisi) in an earlier fifteenth-century hand-colored print from the Steiermark (circa 1420; Graz, Karl-Franzens-Universität, Universitätsbibliothek, Ms. 529, preliminary leaf [the ms. is from ca. 1440]):
http://tinyurl.com/q5ahysq

s) as portrayed (lower register at far right ; at near right, St. Bartholomew the Apostle) in the central section of the earlier fifteenth-century polychromed wooden Marienkrönungsaltar (ca. 1440; restored in the 1870s and again in the 1990s) in the Marienkirche in Stralsund:

t) as portrayed by Donatello in a mid-fifteenth-century bronze statue (1444-1450) on the main altar in the basilica del Santo, Padua: u) as portrayed in a mid-fifteenth-century polychromed wooden statue (ca. 1450) in the Germanisches Nationalmuseum, Nürnberg:

v) as depicted (at right; at left, St. Jerome; at centre, St. Bernardino of Siena) by Antonio Vivarini in a mid-fifteenth-century panel painting (ca. 1451-1456) in the chiesa di San Francesco della Vigna in Venice:
http://tinyurl.com/pz9solk

x) as depicted by Antonio Vivarini in a mid- or later fifteenth-century panel painting (circa 1451-1475) in the collections of the Musée du Louvre in Paris:

http://cartelen.louvre.fr/cartelen/visite?srv=car_not_frame&idNotice=1244
Said to be on deposit at Avignon, Musée du Petit Palais:
http://tinyurl.com/37xuht

z) as depicted (at right, flanking the BVM and Christ Child; at left St. Jerome) by Andrea Mantegna in a mid-fifteenth-century panel painting (circa 1455) in the Musée Jacquemart-André in Paris [zoomable image]:
http://tinyurl.com/o8n4psy

aa) as depicted (at left; at right, St. Bernardino of Siena) by Michele Pannonio in a mid- or later fifteenth-century panel painting in the Pinacoteca nazionale in Ferrara:
http://tinyurl.com/og73lvb

bb) as depicted by Piero della Francesca in a mid-fifteenth-century fresco (1460) in the Pinacoteca comunale of Sansepolcro (AR) in Tuscany:

cc) as depicted (at right; at left, St. John the Baptist) by Bartolomeo Vivarini and Andrea Vivarini in a later fifteenth-century panel painting (1463 or 1464) in the collections of the Musée du Louvre in Paris and on deposit in the Musée du Petit Palais in Avignon: dd) as depicted (at centre; at left St. Oswald; at right, St. Louis, King of France) in the upper right-hand panel of the later fifteenth-century principal altar (1470-1478) of the Katedrála Sv. Martina in Spišská Kapitula, a locality of Spišské Podhradie in Slovakia
[This is an interesting example of the diffusion of the cult of St Oswald from his native Northumbria. As Slovakia was part of the Kingdom of Hungary the presence of St Louis reflects interest in a saint of the Angevin ruling house of that realm]:

http://tarvos.imareal.oeaw.ac.at/server/images/7012197.JPG
The altarpiece as a whole:

ee) as depicted (upper register at right, after Bl. John Duns Scotus and Clare of Assisi) by Carlo Crivelli in a later fifteenth-century panel painting (1471?; from his now dismembered Montefiore altarpiece) in the Polo Museale di San Francesco at Montefiore dell'Aso (AP) in the Marche:
http://sirpac.cultura.marche.it/SirpacIntraWeb/storage/Label/1282/384/32E.jpg
Detail view (Louis):

ff) as depicted (at upper right, second from right; at far right, St. Bernardino of Siena) by Vincenzo Foppa in a later fifteenth-century altarpiece (1476) in the Pinacoteca di Brera in Milan:
http://www.wga.hu/art/f/foppa/altarpie.jpg

gg) as depicted (second from right; at far right, St. Francis of Assisi) in a late fifteenth-century altarpiece (1481) by Vittore Crivelli in the Philadelphia Museum of Art, Philadelphia (PA):
https://www.flickr.com/photos/mharrsch/5895412774
Detail view (Louis): 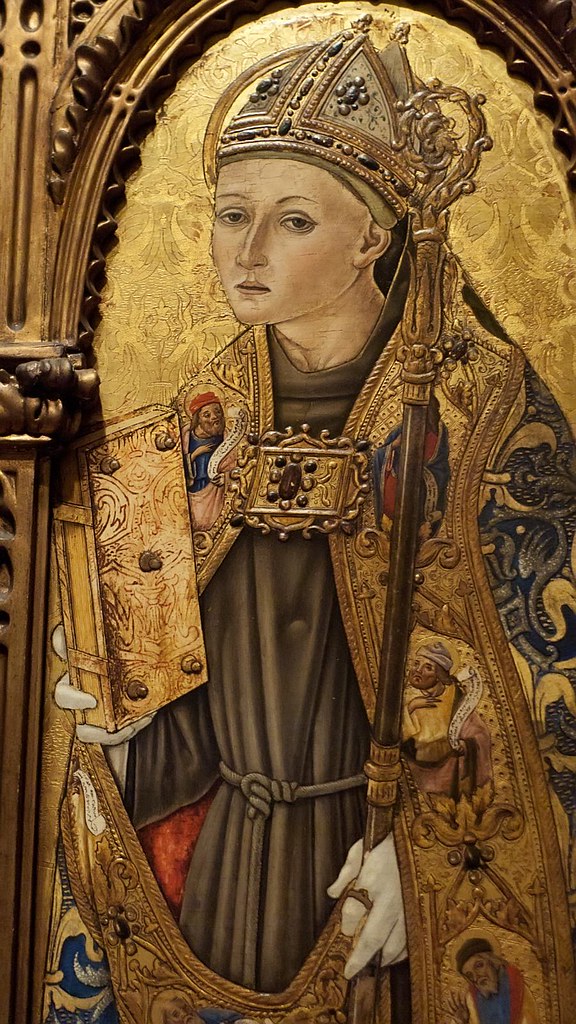 ii) as depicted by Cosmè Tura in a late fifteenth-century panel painting (1484?; on canvas; transferred from wood) in the Metropolitan Museum of Art, New York:
http://www.metmuseum.org/collection/the-collection-online/search/437850

jj) as portrayed (scenes from his legend) by Jakob Mülholzer in two of his panel paintings on the wings of the late fifteenth-century St. Louis of Toulouse altar (ca. 1490-1500) in the St. Jakobskirche, Rothenburg ob der Tauber (Lkr. Ansbach) in Bavaria:

http://tinyurl.com/q92hoq9
The altar as a whole: 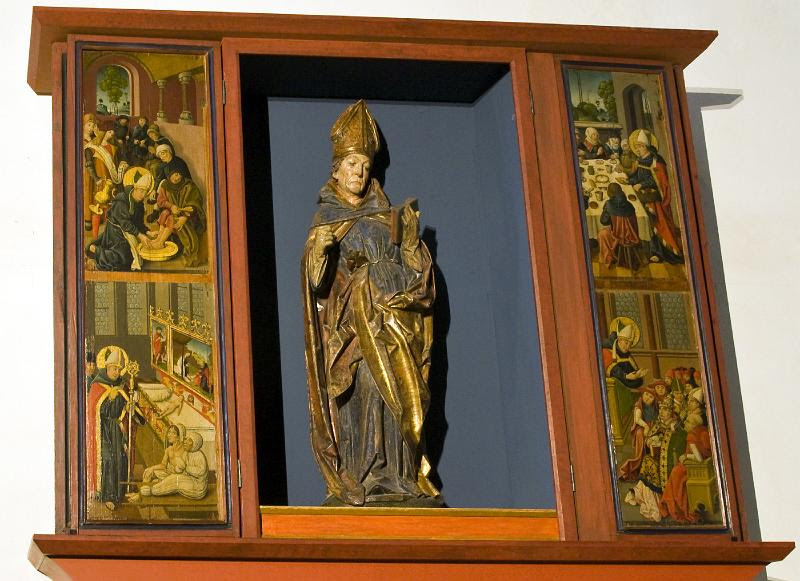 http://tinyurl.com/pqr58bb
The central sculpture is item nn), below.

ll) as depicted (at far right, after St. Lawrence of Rome) by Pietro Perugino in a late fifteenth-century panel painting (1495-1496) of the Madonna and Child with Perugia's four holy protectors now in Città del Vaticano in the Pinacoteca Vaticana:
http://tinyurl.com/opz4k5h

mm) as depicted in an early sixteenth-century fresco (1504) in the chiesa di San Ludovico al Bretto (dedicated to the present Louis) in Camerata Cornello (BG) in Lombardy:
http://tinyurl.com/28bbbfc

nn) as portrayed by Tilman Riemenschneider (attrib.) in the early sixteenth-century central statue (ca. 1505?) of the St. Louis of Toulouse altar in the St. Jakobskirche, Rothenburg ob der Tauber (Lkr. Ansbach) in Bavaria:

oo) as depicted by Sebastiano del Piombo in an early sixteenth-century painting (ca. 1507-1510) on an organ shutter from Venice's chiesa di San Bartolomeo and now in the Gallerie dell'Accademia in that city:
http://www.wga.hu/art/s/sebastia/organ3.jpg

pp) as depicted (at right; at left, St. Bernardino of Siena) by Moretto da Brescia (Alessandro Bonvicino) on a wing from a dismembered earlier sixteenth-century altarpiece (1529-1530) in the Musée du Louvre, Paris: 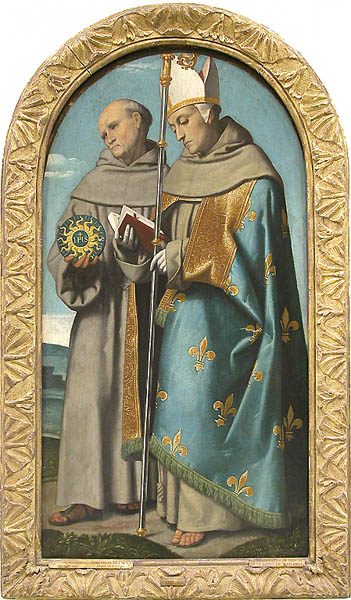