A tour of Reformation Oxford

Last Wednesday I gave a tour of Oxford sites associated with the period 1547-1603. This was for a study week based at Rewley House, the University's Continuing Education section, and followed on from the previous two years when the same tutor and in several cases the same students looked at fifteenth century Oxford and at the period 1485-1547. They have booked me for next year for Jacobean and Caroline Oxford - so I must be doing something right.

Ralph Agas' map of the city from 1578 and the Beerblock drawings of the colleges enable one to visualise the city as it was. It is estimated that the population increased by 50% in the period 1558 -1642, and Hollar's map from the 1670s shows the effect of this on the building pattern.

We walked across the site of the Carmelite friary and looked at Worcester College. Originally built as Gloucester College for Benedictine monks and closed at the dissolution of the monasteries it was bought by Sir Thomas White, the founder of St John's College, and became a centre for recusancy. Gloucester Hall as it became known provided accommodation for the Catesby family, one of whose children was born there recusants, the sibling of Robert, the brains ( if that is the right term? ) behind the Gunpowder Plot. Students from the Hall used to slip away to Mass at the recusant centre at the former nunnery at Godstow a couple of miles upstream.

St John's College on St Giles was also founded by Sir Thomas White, using the former Cistercian St Bernard's College. The college still possesses two banners from the chapel consecration at the refoundation. Two of the most famous recusant martyr priests were members of St John's - the former chaplain St Cuthbert Mayne, the protomartyr from 1577, and St Edmund Campion, a Fellow in the 1560s, and Jesuit mission priest active in 1580-81 when he was captured and executed.

Oppsite is the modern home of Blackfriars in Oxford. In the reign of Queen Mary Spanish Dominicans were in Oxford seeking to understand as well as counteract the spread of Protestantism. Amongst these were Bartolome Carranza, later Archbishop of Toledo, who himself fell foul pf the Spanish Inquisition as can be seen here.

Passing the Martyr's Memorial of 1841 - a curiously backhanded compliment to the Oxford Movement - we looked at the site of the Catherine Wheel inn, at the junction of Magdalen St East and Broad St. It was here in 1589 that two Catholic priests and two laymen were arrested. The landlady was imprisoned for life and the four men were executed on the gallows at the end of Holywell St, where there is now a modern memorial. This incident points, I think, to the part played by inns as meeting places for recusants - as in John Gerard's autobiography in Norwich- and as Catholic "safe-houses"

In Broad St there is the site of the burnings of Latimer and Ridley in 1555 and of Cranmer the following year. At the time this was the remains of the city ditch, overlooked by the city wall. I am very skeptical of the claims that the scorching of the former gates of Balliol are from these fires - to do so would have required a pyre big enough to burn down central Oxford ...

Before their execution the three degraded bishops were held in the Bocardo prison which was in and over the Northgate of the city and adjoined the tower of St Michael at the Northgate.

Bocado just before its demolition in 1771

It was from the top of the tower that Cranmer was forced to watch the death of his two colleagues. Whilst all three were held there the previous year they were taken out to watch the restored Corpus Christi procession - which they of course saw as idolatrous, and one of the bishops hid in a shop doorway to avoid witnessing it. A door from Bocado is preserved in the treasury at St Michael's. Bocado and St Michael's from the south

In St Michael's - itself a fascinating text book of parish church evolution - we looked at the font. This was brought from the church of St Martin at carfax, of which only the tower survives. the particular interest of it is that Shakespeare may well have stood by it in old St Martin's when his godson, the son of the owner sof the Crown Inn where he stayed on journeys between London and Stratford, was baptised. The Crown still exists as apublic house and I understand there is still a room there with sixteenth century painted decoration similar to that to be seen in Pizza Express in the former Golden Cross Inn.

It was along Cornmarket that Queen Elizabeth I made her entry into the city in 1566. She stayed in Christ Church, where anmongst the loyal addresses was was one delivered by the young Anglican Deacon Edmund Campion. As Alice Hogg points out in her excellent God's Secret Agents the government had already lost the sympathy of many within the University by this date, and mot oxford colleges provided martyrs for the Catholic cause.

The Queen came into Oxford from Woodstock manor, where she had been held under house arrest in the mid-1550s, so it was not perhaps a place of happy memories for her.

Jesus College, founded in 1571, is the only Oxford college founded in her reign. it was sdpecifically designed to be a college for students from Wales, and still keeps St David's day as its principal feastday, although the actual Welsh connectiuon has, I gather, largely disappeared. Over High Table in the Hall is afine portrait of Queen Elizabeth I.

Trinity College was founded in the reign of Queen Mary by Sir Thomas Pope. this was in 1554, and like St John's was part of the attempt to re-Catholicise the country. This is discussed in Eamonn Duffy's recent study Fires of Faith, which shows how much was achieved in a short period. Like St John' s it had been amonastic college, Durham College, for the Benedictines from the northern province. Sir Thomas' letters to his stepson, a very reluctant student at the new college are a reminder that time does not change generationakl conflict within families about future career plans.

We looked at the Bodleian, and how Sir Thomas Bodley (1545-1613) saved the Library from the decay into which the pillaging by the Royal Commissioners under King Edward had reduced it, and how he created the basis upon which it has developed, including the copyright status. His memorial in Merton chapel, where he had once been a Fellow has the delicate touch that the pilasters flanking his bust are composed of two piles of books.

St Mary's University church witnessed the trials and condemnation of the three Anglican bishops burned in the 1550s,a nd they and aselection of Oxford martyrs of all traditions from the 1530s to 1681 are commemorated on a modern plaque in the church. In the chancel - which always strikes me as conveying much of what many churches must have looked like four centuries or so ago, lacking stained glass, whitewashed, stripped of colour and most decoration - is the grave of Amy Robsart, whose mysterious death at Cumnor Place outside Oxford in the autumn of 1560 cast a serious shadow over the ambitions of her husband, Lord Robert Dudley.

It was in the church that Edmund Campion left 400 copies of his Decem Rationes, printed in secret at Stonor for the commencement ceremony on June 27th 1581 - a typical act of bravura. His capture occurred soon after at Lyford Grange where he was on July 14th and15th when he was apprehended. 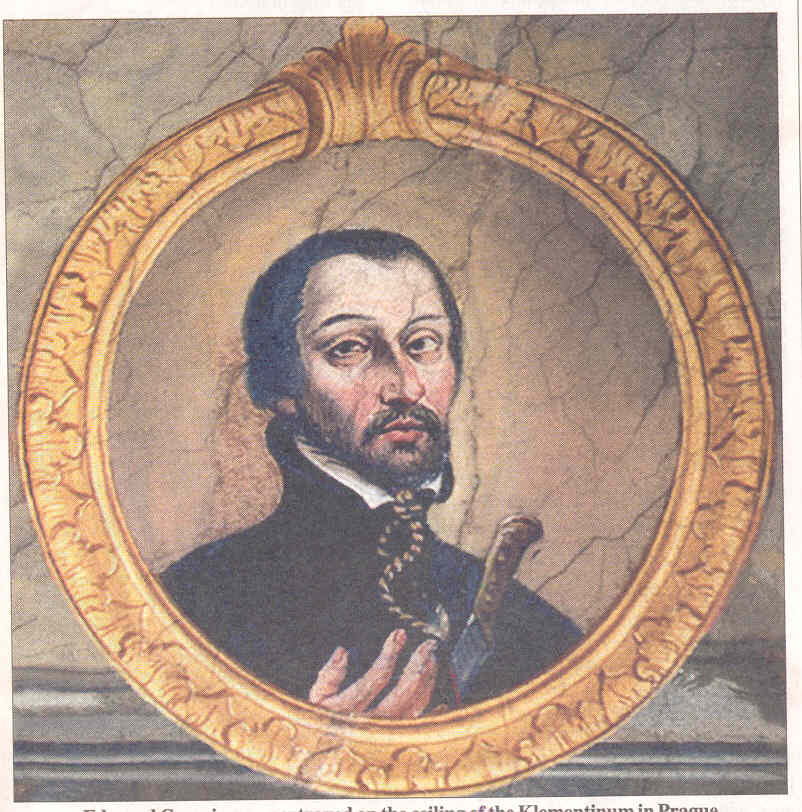 Facing the church is Oriel, and on the High Street facade a statue of Cardinal Allen (1532-1594), of whom there is an account here.
Allen, an Oriel and St Mary's Hall man founded the seminary at Douai which helped maintain the supply of priests to England, later supplemented by the Jesuits. He was a key figure in maintaing the Catholic community, and, placed alongside Newman one could argue Oriel has produced the two most important post-Reformation Cardinals. Manning would, I think, be a close runner up - but he was a Balliol man...

That more or less concluded the tour - we had already run over time, so there was not the hope of talking about how Magdalen College's records recount changing liturgies and musical accompaniment through the purchase of new part books and such like, or to tell stories of an Edwardian Fellow there, Thomas Bickley profaning the Reserved Sacrament, and after exile under Queen Mary becoming an Elizabethan Warden of Merton and Bishop of Chichester ( 1586-96 ). Incidentally regular readers may recall I was thurifer at a 450th anniversary Requiem for Cardinal Pole in the chapel at Magdalen, his college, in 2008.

Nor was there time to look at a house of about 1600 just off the High Street that is now a Thai restaurant ...

Ah well, such are the historic treasures and associations to be found on a short walk around Oxford.
Posted by Once I Was A Clever Boy at 10:59