The Beheading of St John the Baptist


Today is the feast of the Decollation or Beheading of St John the Baptist.

Here is a late medieval depiction of the event in a carving from the north choir ambulatory of Amiens cathedral. The cathedral still possesses one of the skulls which is claimed, and has been claimed for centuries, to be the head of the Baptist. I have posted about this great relic previously.


It was a much later French artist, Pierre Puvis de Chavannes (1824-98), who produced what is, to my mind one of the most compelling - and perhaps disturbing - images of the Decollation. Painted in 1869 and exhibited at the Paris Salon of 1870 this is now in the Barber Institute in Birmingham, with another, and later, version, possibly unfinished, and less compelling, in the National Gallery in London:

Writing of this painting the Web Gallery of Art says that it exemplifies Puvis' ideals and methods. whilst almost certainly unfinished its lean pain surface is characteristic of the artist. During his travels he had fallen in love with  ' Italian primitive ' frescoes and it was their flat matt surfaces that he tried to imitate. Deriving the composition from church frescoes Puvis distorts bodies - such as the executioner's muscular back - to appear parallel to the picture surface, or at right angles to it in strict profile. Perspective is suppressed and space behind the fig tree is patterned by its branches into two-dimensional shapes.

These features can be seen again in the Birmingham painting, but here more clearly dominated by the calm, full face figure of St John, his nimbus drawing attention to his as the central figure in the frozen moment of time. 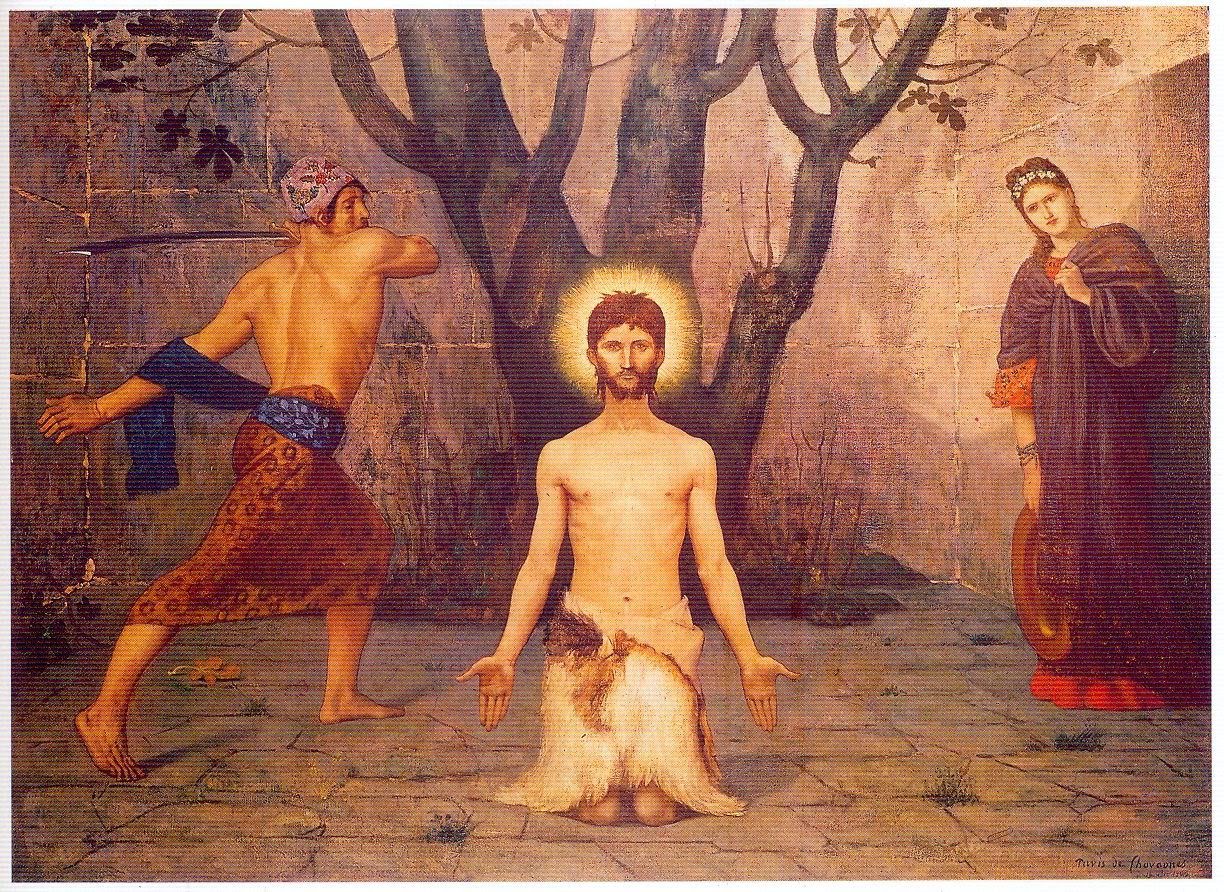 The contrast between the victim's stillness, prayerfulness, trustfulness and the sweeping movement of the executioner is striking. This is one of the reasons why the image is haunting.

What also makes the painting so striking is the youthfulness and vulnerability of the saint. He appears less fierce, more human, than he often does in paintings - not just the last of the prophets but also the son of Zechariah and Elizabeth.

The full face depiction of the pale face and body are reminiscent of the facing alabaster panels from the late middle ages which were popular products of the English alabasterers.

St John the Baptist pray for us