To mark St Dominic's feast Gordon Plumb has posted a photograph of the saint on the Medieval Religion discussion group. It comes from the surviving stained glass in Long Melford church in Suffolk, and can be viewed at :

In the panel St Dominic is shown wearing blue because the black of the Dominican habit would be counter-productive in stained glass, and is usually replaced therefore with blue glass.

By following the links underneath the figure readers can access the whole of  Gordon Plumb's archive of photographs of the glass in Holy Trinity Long Melford. Though only some of the glazing survived the activities of enthusiastic reformers what does survive, both devotional and the remarkable portraits of fifteenth century donors is of very high quality and an indication of what once filled the windows not only at Long Melford but across East Anglia.

Even in a county rich in late medieval churches Long Melford is exceptional in its quality and contents, and its liturgical life before the disruptive changes of the sixteenth century is cited by Eamon Duffy in The Stripping of the Altars.

St Dominic
This painting preserves the tradition of his auburn hair, and that as he grew older he retained a complete tonsure. 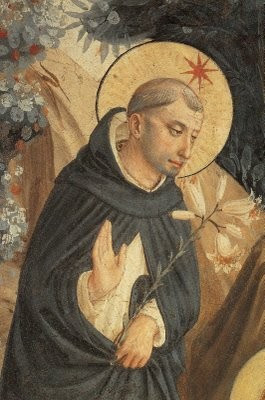 St Dominic
His hair may be depicted less accurately, but he has his distinctive emblems of the star and the lily, indicating his purity of life.

Stephanie Mann also has a post on Supremacy and Survival about St Dominic and the history of the Order of Preachers in the British Isles, and with a link at the conclusion to another related post. These can be viewed at  Happy Feast of St. Dominic 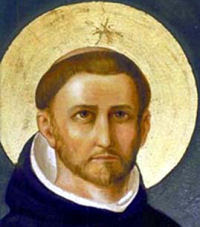