Joseph of Arimathea and Nicodemus

In the Roman Martyrology August 31st is now the day of commemoration of Joseph of Arimathea and Nicodemus (d. 1st cent.).

These two Gospel figures were remembered in medieval Christianity primarily for their roles in the recovery of Jesus' body after the Crucifixion and its subsequent entombment. Starting at least with the Gospel of Nicodemus their acta were enlarged and embroidered upon. By the tenth century there was an Eastern tradition, preserved in a text in Georgian said to have been translated from Syriac, that Joseph of Arimathea was the founder of the church of Lydda. In the later Middle Ages he was reputed to have arrived in Provence with Lazarus, Martha, and Mary and to have gone on to evangelize in, depending on what text one is reading, parts of today's France, Spain, Portugal, or England [ Well we all know in England taht he came to Glastonbury - Clever Boy].

Nicodemus, who was said to to have removed the crucifixion nails from Jesus' body, was credited legendarily with the creation of that famous crucifix, the Holy Face (Volto Santo) of Lucca. In the legends of the Finding of St. Stephen Protomartyr, Nicodemus is said to have been buried by Gamaliel in Stephen's secret grave, into which were also placed Gamaliel's son Abibus and, when his time came, Gamaliel himself. Liturgical commemoration on August 2nd or 3rd of this supposed discovery insured Nicodemus' ongoing if not entirely robust construction as a saint in both the Eastern and Western Middle Ages.


Some medieval images of Joseph of Arimathea and Nicodemus:

d) Joseph of Arimathea (holding Jesus) and Nicodemus (lower right, with forceps and vessel) at the Entombment as depicted in the late eleventh- or early twelfth-century so-called Gospels of Matilda of Canossa in the Museo diocesano d'arte sacra e benedettino at Nonantola (MO) in Emilia-Romagna:
http://tinyurl.com/5fmht6

g) Joseph of Arimathea (holding Jesus) and Nicodemus (on the ladder) as portrayed in Benedetto Antelami's later twelfth-century relief of the Deposition from the Cross (ca. 1178) in the cathedral of Parma:

i) Joseph of Arimathea (holding Jesus) and Nicodemus (at the foot of the Cross) as depicted by Enrico di Tedice in a later thirteenth-century panel painting (1260s) in the Museo nazionale di San Martino, Pisa:

j) Nicodemus (in the illumination in the right-hand column; at the invention of Stephen, Gamaliel, Nicodemus, and Abibo) as depicted in a late thirteenth-century copy of French origin of the Legenda aurea (San Marino, CA, Huntington Library, ms. HM 3027, fol. 90r; image expandable):
http://tinyurl.com/24lqdjl

m) Nicodemus (nimbed) along with the also nimbed Gamaliel, Stephen, and Abibus in their uncovered grave at the Finding of Stephen as depicted by Bernardo Daddi (attrib.) in one of his mid-fourteenth-century predella paintings devoted to St. Stephen (ca. 1345) in the Pinacoteca Vaticana (from the point of view of the clerical discoverers Nicodemus is probably the first or the third corpse from left, as the one between these is clearly identifiable by vestment as the presumed deacon Stephen and the relatively youthful corpse at far right will be Abibus):
http://www.atlantedellarteitaliana.it/immagine/00023/15329OP368AU24434.jpg
For a different identification of the four nimbed corpses, see this from the Musei Vaticani, where the painting is titled the Ritrovamento dei corpi dei Santi Luciano (the person to whom the long-dead Gamaliel had appeared in a revelatory dream and thus one of those involved in the Finding), Abibo, Nicodemo, and Stefano:
http://mv.vatican.va/2_IT/pages/PIN/PIN_Sala01_04.html 
o) Joseph of Arimathea (behind Jesus) and Nicodemus (at Jesus' left) as depicted by Hugo van der Goes in a later fifteenth-century panel painting of the Lamentation (ca. 1470) in the Kunsthistorisches Museum in Vienna:

p) Joseph of Arimathea and Nicodemus as depicted by Simon Marmion in a later fifteenth-century panel painting of the Lamentation (early 1470s) in the Metropolitan Museum of Art, New York:
http://tinyurl.com/6n5zax - which has notes on its commissioning by Duke Charles the Bold of Burgundy and his wife Margaret of York.

q) Joseph of Arimathea (top centre) and Nicodemus (centre right, with vessel) as depicted in a late fifteenth-century icon in the State Tretyakov Gallery, Moscow:
http://www.icon-art.info/masterpiece.php?lng=en&mst_id=368

r) Nicodemus (at left) and Joseph of Arimathea (at right) as portrayed in a late fifteenth-century polychromed wooden sculpture of the Entombment (ca. 1485) in the abbaye Saint-Pierre at Moissac: 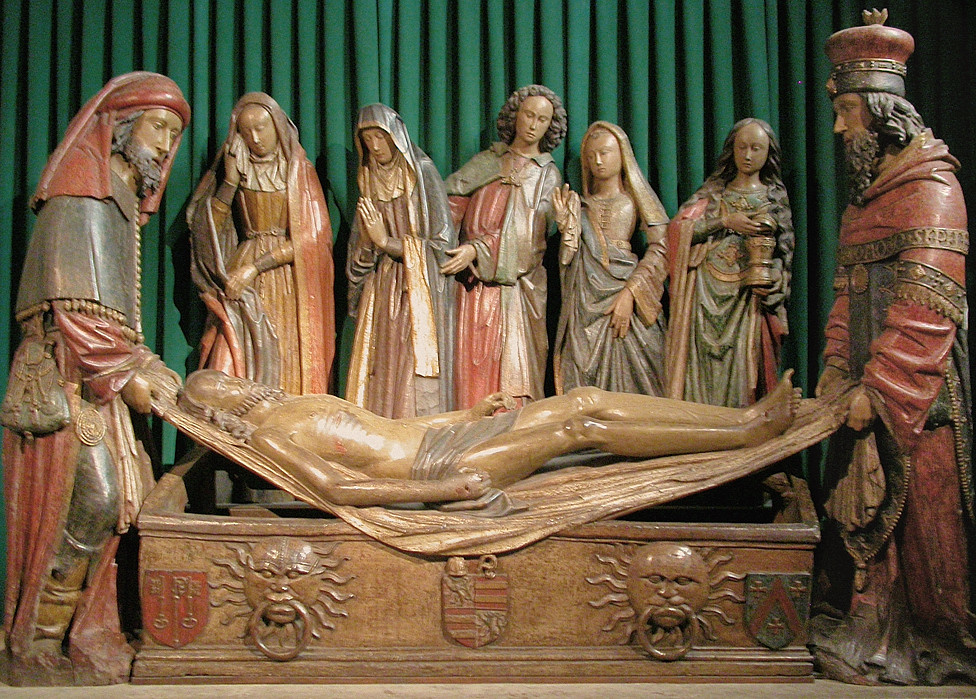 Shrewsbury, St Mary, Trinity Chapel, window from St Jacques Liège c.1535:
Though this originally was part of a Trinity and the incumbent, feeling it was improper to represent God, hadt a turban put in place of the top of God's head and the Dove of the Holy Spirit was moved to a tracery light in the window! So a made-up representation of Joseph, but interesting historically nevertheless!
https://www.flickr.com/photos/22274117@N08/3180707818
and detail of centre panel:
https://www.flickr.com/photos/22274117@N08/3180711922