Today is the 830th anniversary of the death at Martel near Limoges of Henry the Young King, the eldest of the sons of King Henry II and Queen Eleanor of Aquitaine to reach maturity. Their second son he was born on February 28th 1155, just after his father's accession and coronation. He himself was crowned in his father's lifetime as King in 1170 - an action which enraged St Thomas of Canterbury as the coronation, a privilege of his see, was performed by Archbishop Roger Pont L'Evêque of York - but died in 1183, six years before his father. As a result he has tended to disappear from regnal lists, and indeed he has no numeral indicator; maybe we should follow the German practice and designate him King Henry (III), but that would cause confusion. Still it should be remembered that there have been nine, not merely eight, crowned English Kings called Henry - and if you are Jacobite in sympathies, then there is also Cardinal York...

One attempt to draw attention to his life is a blog Henry the Young King which offers interesting posts about him.

There is an online account of him here, which cites this description of him :

A Latin poem by a court official written to commemorate the coronation hints at the charisma of this young prince. There he is described as a charming youth of striking beauty, tall but well proportioned, broad-shouldered with a long and elegant neck, pale and freckled skin, bright and wide blue eyes, with a thick mop of the reddish-gold hair characteristic of his dynasty.

The Coronation of Young King Henry


As that online account and Elizabeth Hallam's life of him in the Oxford DNB, which can be read here, show he was not universally popular with his contemporaries. This aspect is discussed in the post
A Lovely Place of Sin from the blog about his life.


Given little real authority by his father he spent much of his time jousting. A popular and affable young man, but perhaps not the strongest character - Gerald of Wales wrote of him and his brother Richard that they were "both tall in stature, rather above the middle size, and of commanding aspect. In courage and magnanimity they were nearly equal; but in the character of their virtues there was great disparity... [Henry] was admirable for gentleness and liberality...had a commendable suavity... commended for his easy temper... remarkable for his clemency... the vile and undeserving found their refuge in [Henry]... was the shield of bad men... was bent on martial sports... bestowed his favours on foreigners... [Henry's] ambition magnanimously compassed the world."

His father's reported statement about him has genuine pathos - "He cost me much, but I wish he had lived to cost me more." 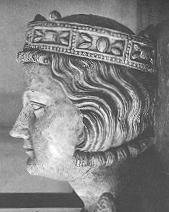 The head of the effigy of theYoung King in Rouen cathedral

His Queen was Margaret of France, daughter of King Louis VII and his second wife Constance of Castile; Margaret's elder half sisters, being the daughters of Queen Eleanor from her first marriage, were thus the Young King's half sisters as well. They had a son William who lived for three days in 1177. Following Henry's death she returned to the French court and married secondly King Béla III of Hungary  - thus becoming the only Queen of both England and Hungary. 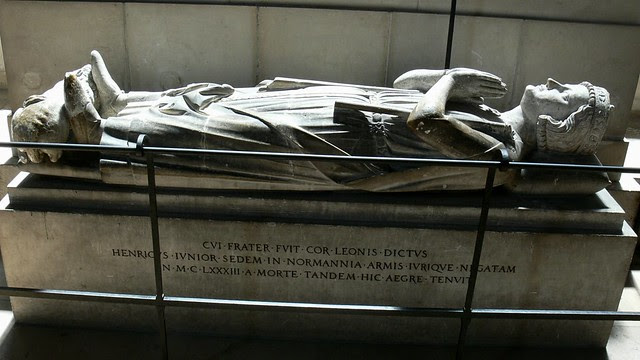 The effigy in the choir ambulatory at Rouen cathedral 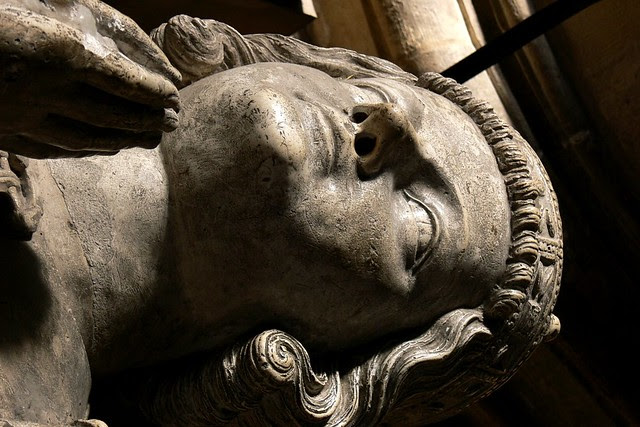 A close-up of the face

One consequence of his death was that when his brother Richard succeeded their father as King in 1189 there was not a division of the Angevin empire within France, as might have happened if the Young King and lived and Ricahrd had been left as Duke of Aquitaine. As it was the Duchy remained linked to the English crown until 1453.
In the weeks before his death the Young King had been plundering shrines such as St Martial at Limoges and Roqueamadour to fund a campaign against his father; struck down by dysentery he spent his last days, as is recounted in the Wikipedia article cited above, in penitence and seeking forgiveness. This, and doubtless the reaction to the death of a handsome young ruler who had a considerable following, led to an attempt to present him as a potential saint. As a result his body, on its journey for interment was Rouen as he had requested, was seized for burial at Le Mans by the Bishop before being recovered by the Dean of Rouen and taken to the cathedral there, where it was finally buried on July 22nd. The effigy over his tomb appears similar to that over the heart burial of his brother King Richard I which is also in the choir, and probably dates from the years after 1200. 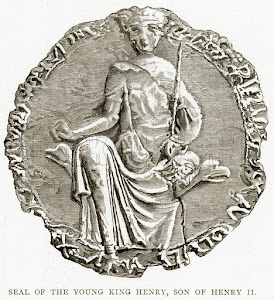 The seal of Henry the Young King

Thank you for mentioning and recommending my blog. I am most grateful. If you do not mind I would love to recommend your wonderful blog on my Facebook Page on the Young King called Henry of Lesser Land.