Today is the feast day of St Aloysius Gonzaga, the patron saint of the church of the Oxford Oratory. Built in 1875 by the Jesuits they took as their patron one of the great Jesuit saints, and a role model for youth.

The Jesuits surrenderd the care of the church to the Archdiocese of Birmingham in 1981 and in 1990 the Oratorians arrived to found the third English Oratory. Nonetheless devotion to St Aloysius has continued alongside that of St Philip Neri, and St Aloysius Day is always a highlight of the parish year. 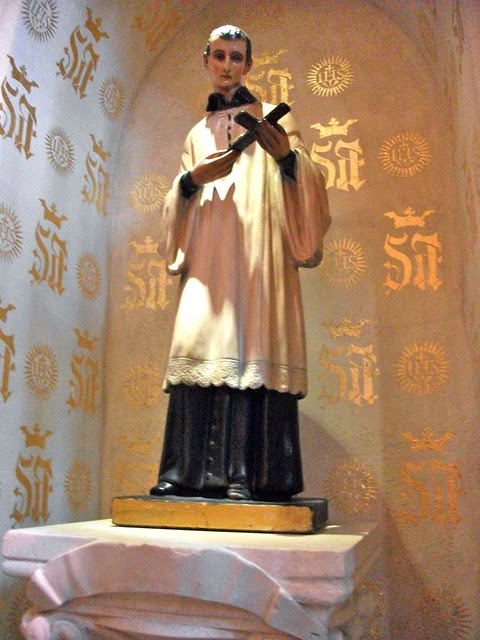 We commenced our celebrations last night with Solemn Vespers and this evening there was a Sung High Mass at 6pm. As is customary the preacher was a Jesuit, and this year it is Fr Dushan Croos  the assistant University Chaplain. In his sermon he said that on theapplication of the Gospel reading St Aloysius' love for God - unkowable to the outsider - could be measured by the love St Aloysius showed to his neighbour, and that this was a model for us all to follow, and as illustrated by the excellent pastoral care we enjoyed from the Oratorians.

It occurs to me that despite the diiferences between a Jesuit and an Oratorian approach one can see in St Aloysius a young man not unlike those of his near contemporaries who were transformed under St Philip's influence to lives of pastoral solicitude.

Following the Mass there was the customary parish buffet, and this time we were back in the reconstructed ansd extended parish centre which I wrote about in my last post. This proved an excellent setting and was amost enjoyable occasion, one on which one could talk to old and new friends and tuck in to Pimms and suitably festive food - not least meat on a Friday as today was, of course, a local Solemnity...