The Scottish Coronation in 1633

Today is the 380th anniversary of the coronation of King Charles I as King of Scots at Holyrood in 1633. King Charles I in 1633
The print commemorates the Coronation
Image: Wikimedia 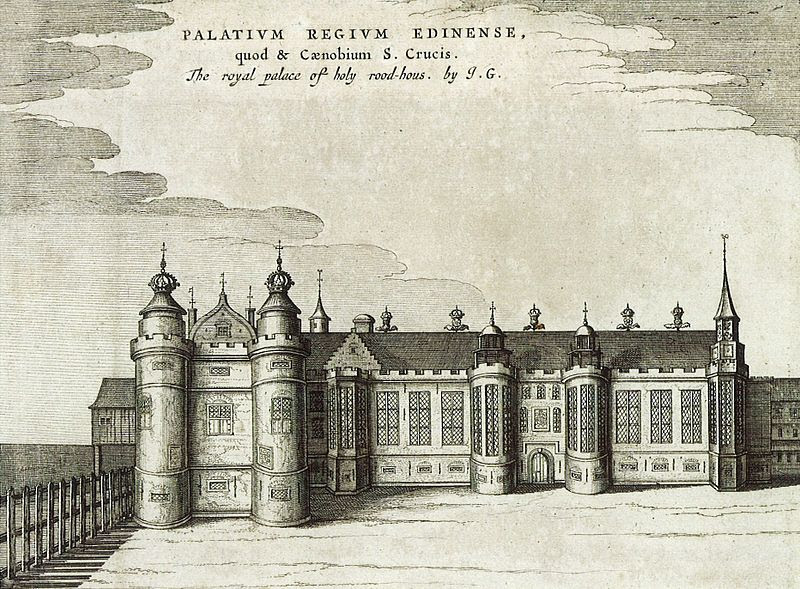 Holyrood Palace in the early seventeenth century.
A drawing by James Gordon of Rothiemay about 1649

This was the first coronation in Scotland since that of King James VI in 1567, and as with the coronations of King James V and Queen Mary I, had been that of an infant. Not since that of James IV in 1488, at the age of 16, had there been the coronation of near adult, and before that it was that of King James I in 1424 which had last seen an adult ritually receive the Honours of Scotland. Probably for these reasons the King appointed acommission to research the rite, and this is a major source for our knowledge of the Scottish ceremony. Only once since has there been a Scottish coronation - that of King Charles II in 1651 - and were, as is, I think to be desired, there to be a restoration of the ceremony and as discussed here in the context of possible independence, the 1633 report would be an important source.

The 1513 and 1543 ceremonies had taken place in the Chapel Royal at Stirling and that of 1567 in the parish church of the Holy Rood there. The abbey of Scone, traditional place of coronations up to 1424, had been destroyed, and for this occasion the ceremonial was located in the remains of Holyrood abbey, which had seen the coronation of King James II in 1437.

All that remained of the abbey was the nave, the remainder of the church having been demolished in 1570, and the structure was now restored for the occasion. The interior of the Chapel Royal in the late seventeenth century


Further renovated by King James VIi to act as the Chapel of the Order of the Thistle in 1687 it was sacked by the edinburgh mob in the following year during the revolution and was left in decay. In 1768 the vault collapsed, reducing it to ruins:

The interior of the Chapel Royal today


A late nineteenth century plan to restore it for the Thistle Chapel was deemed impractical, and the new Chapel of the Order added to St Giles Cathedral in the centre of the city. Incidentally it was on this visit to Scotland that King Charles  establsihed the new diocese of Edinburgh with St Giles as its cathedral.

The service was an opportunity to show liturgical ideas in accord with the ideas of Bishop William L aud of London who accompanied the King on his journey, and the episcopal genuflections in the service caused raised eyebrows, and indeed raised ire amongst the more Presbyterian of the King's subjects.

The principal officiant was Archbishop John Spottiswoode of St Andrews, of whom there is a biography here. The Oxford DNB life of him by A.S.W.Pearce can be seen here. 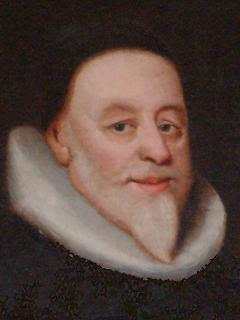 
For the ceremony the King wore the mantle of King James IV - as with other realms then and now such state vesture can have along life.

The text of the Coronation Oath sworn by Kings of Scots from King James VI onwards was approved by the Scottish Parliament  in 1567:

I, N.N., promise faithfully, in the presence of the eternal, my God, that I, enduring the whole Course of my Life, shall serve the same Eternal, my God, to the utmost of my Power, accordingly as he required in his most Holy Word, revealed and contained in the New and Old Testament; and according to the same Word shall maintain the true Religion of Jesus Christ, the preaching of his Holy Word, and due and right administration of his Sacraments, now received and practised within this Realm; and shall abolish and oppose all false Religion contrary to the same; and shall rule the People committed to my Charge, according to the Will and Command of God, revealed in his foresaid Word, and according to the lovable Laws and Constitutions received in this Realm, in no way repugnant to the said Word of the Eternal, my God; and shall procure to my utmost to the Kirk of God and whole Christian people true and perfect Peace in all times coming; the Rights and Rents, with all just privileges of the Crown of Scotland, I shall preserve and keep inviolate, neither shall I transfer nor alienate the same; I shall forbid and repress in all Estates and all Degrees theft, Oppression and all kind of Wrong; in all Judgements, I shall command and procure that Justice and Equity be kept to all creatures without exception, as he be merciful to me and you that is the Lord and Father of all Mercies; and out of all my lands and empire I shall be careful to root out all Heresy and Enemies to the true Worship of God, that shall be convicted by the true Kirk of God of the foresaid Crimes; and these Things above-written I faithfully affirm by my solemn Oath.

A later version was introduced in 1689.

A new ampulla for the oil of anointing was made for the occasion - it can be seen today in the National Museum of Scotland in Edinburgh:


Scottish monarchs had been anointed since 1329 following a grant of the right to King Robert I for his successors by Pope John XXII in that year.

The regalia used were the Honours of Scotland as still to be seen in the Crown Room at Edinburgh Castle, and about which there is an article here. 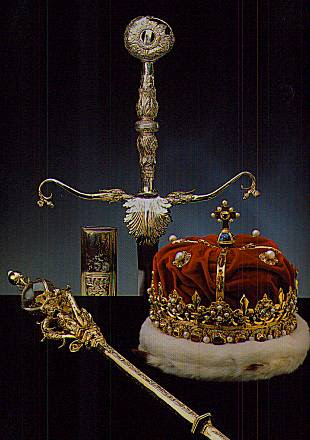 The Honours of Scotland


The Coronation was also marked by the issue of commemorative medals by the King's favoured medallist, Nicholas Briot:


Several buildings erected in that Coronation year record in their plasterwork national symbols and the number of monarchs since the establishment of the monarchy by King Fergus I in the fourth century BC. As part of the 1633 celebrations portraits of 107 kings were displayed, some of which (by George Jamesone) survive. There is more about this legendary history here.

I believe the coronation of James VI was held in December 1566, not 1567. I enjoyed the post immensely.