Today is the feast day of St Anthony of Padua, 1195-1231. There is an account of the life of this noted Franciscan preacher and teacher and of his continuing role in the life of the Church here.

From the website which provided this fourteenth century image of the saint, which is more forceful than so many recent and modern ones which are often very sentimental, I found this piece about his iconography, which I have adapted for this post:

Those who have visited any number of Catholic churches will be familiar with the representation of St. Anthony of Padua as a young Franciscan holding the Christ Child on one arm  This tradition is based on a vision of the Christ Child that the saint is said to have had while staying with a nobleman. The man looked into the room he had provided for Anthony and saw him holding the Child in his arms.

This account did not enter the iconography until the 16th century, and even then the Child is shown standing upon the book that had until then always been Anthony's most common attribute. The book refers to Anthony's standing as the most famous preacher of his time and the Franciscan order's first Lector in Theology. The earliest images of him have the saint holding a closed book in his left hand and wearing the tonsure and habit of the Franciscan order, as above.

After the Child became a common feature, many painters put him on the opened pages of the book, as if he had appeared to Anthony while the saint was meditating on the scriptures . The Child is variously portrayed as a toddler, a boy , or even a small-scale man .

Because of the legend that he had once preached to the fish, these were sometimes used as his attribute.  He is also often seen with a lily stalk . Another convention denotes St. Anthony's visionary fervor by means of a red heart held up in the right hand , sometimes aflame .

In former Venetian areas Anthony often figures in group paintings – anachronistically welcoming into Heaven martyrs from ancient times (examples: St. Anthony of Antioch, St. Eugene) and assisting at the Invention of the True Cross . He is also shown interceding with Mary and the Christ Child for souls in Purgatory . This subject is possibly related to the story, briefly mentioned in his Vita, of a nun who feared Purgatory but who through the prayers of Anthony was able to be cleansed in this life, or perhaps to the more numerous and fully detailed accounts of the saint coming from Heaven to counsel women in despair of their salvation.

Given the large number of  portraits and statues of Anthony in Italy and worldwide , there are surprisingly few narrative images. One of the more popular types represents the "Miracle of the Mule": A Catharist said he would believe in the Real Presence only if a dumb animal were to prefer the consecrated host to a bundle of feed. Anthony arranged for a mule to be brought forward and given that choice - the mule went to the Host and knelt down in adoration.

Here is an extract from a sermon by St Anthony of Padua used in the Office of Readings for today:
We should speak, then, as the Holy Spirit gives us the gift of speech. Our humble and sincere request to the Spirit for ourselves should be that we may bring the day of Pentecost to fulfilment, insofar as he infuses us with his grace, by using our bodily senses in a perfect manner and by keeping the commandments. Likewise we shall request that we may be filled with a keen sense of sorrow and with fiery tongues for confessing the faith, so that our deserved reward may be to stand in the blazing splendour of the saints and to look upon the triune God. 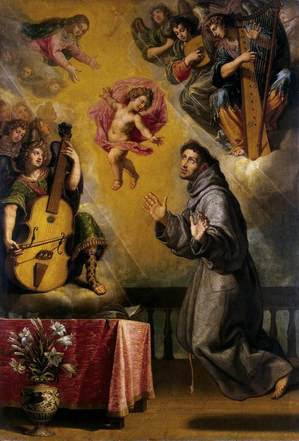 St Anthony, the Christ Child and a pot of lilies

The text for traditional blessing of lilies for the feast of Saint Anthony of Padua is available here.