The death of King James III

Today is the 525th anniversary of the battle of Sauchieburn and the murder of King James III of Scots in 1488. 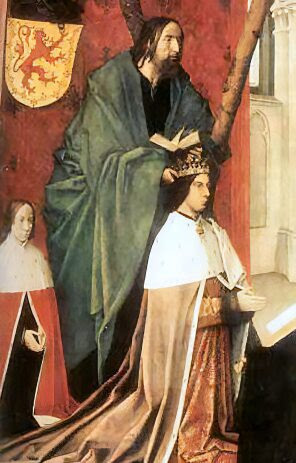 The portrait of the King from the Trinity altarpiece

This is the largest  copy I can find on the internet of this really wonderful portrait - it does not do it justice. The portrait of the King and of his Queen is hauntingly beautiful, and that may have raised my awareness of the King and his reign when I first saw it, many years ago, reproduced in Gordon Donaldson's Scottish Monarchs. In not a few ways King James III is reminiscent of King Richard II, and perhaps also King Edward II, in fourteenth century England. Tensions within the royal house and with the nobility and a strong sense of their independent royal authority led all three kings to their violent downfall.  Anthony Tuck's telling point in Richard II and the English Nobility that the deposition and violent death of two English kings in the fourteenth century points to the strength of the English crown - the only wayt to restrain the monarch was to remove him - applies also in fifteenth century Scotland - hence the fate sof Kings James I and III, and indeed the military deaths on campaign of Kings James II and IV indicate the risks they were willing to undertake in campaigns against their more powerful southern neighbour.


There are introductions to his life and reign here and here. The biography by Norman Macdougall from the recent Oxford DNB can be read here and there is an illustrated online account which appears to be influenced by Macdougall's account here.
Neither of these are especially not favourable to view that the King was a considerable patron of the arts, pointing to what few actual references or examoples there are, and to others as the patrons. Nonetheless such things as do survive from the reign do show what it was possible to see in the Scotland of the late fifteenth century - a pre-Reformation, pre-Calvinist Scotland that is far more difficult to imagine than pre-Reformation England at time because so little survives. Supreme amongst these survivals is the Trinity Altarpiece by Hugo van der Goes, part of the Royal Collection and now on display in the National gallery of Scotland in Edinburg, which was probably not commissioned by the King, although it contains his portrait and that of his Queen and of his son. Given that the panels were painted for the Trinity College Kirk was founded by the King's mother and was her burial place it seems likely that at very least the King was aware of the paintings.

My own sense, and it is an instinct rather than based on any detailed study of the subject and period, is that modern historians may, if only becaus e of the paucity of surviving evidence, not be giving King James sufficient credit for such artistic patronage as there was. It would not be unreasonable to imahine taht he had some say in the currency produced in his later years, including the gold Unicorn and the first conciously representational potrait of a monarch from either of the realms that made up Britain on the silver groats:

Groat from the later years of the reign


In his later years the King was deemed avaricious, and a detailed inventory of his treasure survives - amongst the pieces was a collar whose design of thistles and rue [Andrew] became the pattern for that of the Order of the Thistle - unless one subscribes to the older view that King James III was indeed the founder of the Order; that view is rather discounted by modern historians, but the collar design is clearly recorded. 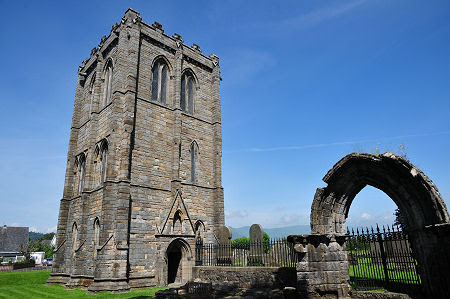 The tomb of King James III and Queen Margaret in the ruins of Cambuskenneth Abbey
Image: undiscoveredscotland.co.uk
King James III was killed at or after the battle of Sauchie[burn], to the east of Cambuskenneth. His body was taken to Cambuskenneth abbey for burial. He was interred in front of the high altar alongside his queen, Margaret of Denmark, who had died two years earlier. Bones thought to be the remains of the King and Queen were excavated in 1864 and re-interred, at Queen Victoria’s command, under a stone monument within the choir.