Today is the feast of St Norbert, founder of the Norbertines or Premonstratensian canons who died in 1134. There is an online account of his life here and another one here.

The reading at today's Office of Readings has been compiled using words given in quotation marks  taken from the biography of Saint Norbert, written by a Premonstratensian canon who was a contemporary of the saint. Pope Innocent II’s Apostolic Letter was issued under leaden bulla to Saint Norbert on June 5, 1133:

Norbert is deservedly numbered by historians among those who made an effective contribution to the reform movement under Pope Gregory VII. He established a clergy dedicated to the ideals of the Gospel and the apostolic Church. They were chaste and poor. They wore “the clothing and the symbols of the new man; that is to say, they wore the religious habit and exhibited the dignity proper to the priesthood.” Norbert asked them “to live according to the norms of the Scriptures with Christ as their model.” They were “to be clean in all matters pertaining to the altar and divine worship, to correct their faults and failings in their chapter meeting, and to care for and give shelter to the poor.”
The priests lived in community, where they continued the work of the apostles. Inspired by the practice of the early Church, Norbert exhorted the faithful to join the monastic life in some capacity. So many men and women responded to the invitation that many asserted that no man since the apostles themselves had inspired so many to embrace the monastic life.
When Norbert was appointed an archbishop [of Magdeburg in 1126], he urged his brothers to carry the faith to the lands of the Wends. In his own diocese he tried unsuccessfully to convince the clergy of the need for reform and was confronted with noisy protests both in the street and in the church.
One of the principal goals of Norbert’s life was to foster harmony between the Apostolic See and the German empire. At the same time he wanted to maintain Rome’s freedom in the matter of ecclesiastical appointments. Apparently his efforts were so successful that Pope Innocent II thanked him profusely in a letter in which he called him a “devoted son,” and Lothair made him chancellor of the realm.
Norbert did all these things with a steadfast faith: “Faith was the outstanding virtue of Norbert’s life, as charity had been the hallmark of Bernard of Clairvaux’s.” Affable and charming, amiable to one and all, “he was at ease in the company of the humble and the great alike.” Finally, he was a most eloquent preacher; after long meditation “he would preach the word of God, and with his fiery eloquence purged vices, refined virtues and filled souls of good will with the warmth of wisdom.” He spent many hours in contemplation of the divine mysteries and fearlessly spread the spiritual insights which were the fruit of his meditation.
Reading that it occurred to me that in not a few ways he can be said to resemble St Philip Neri in his methods of evangelization, and using communities of priests to minister to the faithful, although in medieval England the Premonstratensians teneded to settle in rural and often remote locations rather than as communities to work in the expanding towns of the twelfth century. 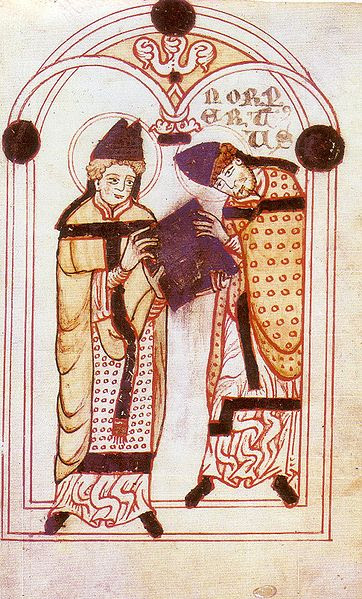 St Norbert, on the right, receives the rule for the life of canons from St Augustine of Hippo
From a manuscript of the Vita Sancti Norberti dated to 1140 now in Munich
Image: Wikipedia

I used to think of the Premonstratensians as being a matter for medievalists, not realising until recent years that they are very much alive and functioning as an Order, and I know several members of the thriving and successful community at St Philip's Priory in Chelmsford. On my two visits there last year for a profession and an Ordination I was impressed by what they are doing and offering to the Church.
I shall keep them especially in my prayers today.