The Suppression of Roche Abbey in 1538 - a personal view

475 years ago, on June 23rd 1538, the Cistercian abbey of Roche, in the southernmost part of the West Riding of Yorkshire, was surrendered to the King's Commissioners by the Abbot and Convent. There is an online introduction to the history of the abbey here. The Victoria County History of Yorkshire section on the abbey can be read here and there is another, modern, academic online account here.

The remains of the abbey are now in the care of English Heritage. A modern reconstruction of Roche Abbey from the north-east

Roche Abbey - an aerial view from the west

I have two reasons for posting about Roche amongst so many other houses that were being suppressed at that time, the first academic, the second more personal.

Michael Sherbrook was Rector of Wickersley, near Rotherham, from 1567 to 1610.  In the 1590s he completed an account of the memories of his father and uncle who witnessed the spoliation of Roche Abbey in 1538. His account shows the scale of devastation,and the extent of self-interest shown by monks and locals alike. It is taken from Tudor Treatises  Yorkshire Archaeological Society Record Series Vol. CXXV (Wakefield , 1959), p. 19:
" [Roche Abbey] a house of White Monks; a very finely built house of freestone and covered with lead (as the abbeys in England, as well as the churches are). An uncle of mine was present at the breaking up of the abbey, for he was well acquainted with several of the monks there. When the community was evicted from the abbey, one of the monks, his friend, told him that each monk had been given his cell where he slept, wherein there was nothing of value save his bed and apparel, which was simple and of little worth. This monk urged my uncle to buy something from him, but my uncle replied that he could see nothing that would be of any use to him; the monk asked him for two pennies for his cell door, which was worth over five shillings; his uncle refused, as he had no idea what he would do with a door (for he was a young unmarried man, and in need of neither a house nor a door). Others who came along later to buy the monks’ corn or hay found that all the doors were open, and the locks and shackles plucked off, or the door itself removed; they entered and stole what they liked.
Some took the service-books that were in the church and laid them on their Waine Coppes to repair them; some took windows from the hay barn and hid them in the hay, and did the same with other things: some pulled iron hooks out of the walls – but did not buy them – when the yeomen and gentlemen of the country had bought the timber of the church.
For the church was the first thing that was spoiled; then the abbot’s lodging, the dormitory and refectory, with the cloister and all the buildings around, within the abbey walls. For nothing was spared except the ox-houses and swinecoates and other such houses or offices that stood outside the walls – these had greater favour shown to them than the church itself. This was done on the instruction of Cromwell, as Fox reports in his Book of Acts and Monuments. It would have pitied any heart to see the tearing up of the lead, the plucking up of boards and throwing down of the rafters. And when the lead was torn off and cast down into the church and the tombs in the church were all broken (for in most abbeys various noblemen and women were buried, and in some kings, but their tombs were no more regarded than those of lesser persons, for to what end should they stand when the church over them was not spared for their cause) and all things of value were spoiled, plucked away or utterly defaced, those who cast the lead into fodders plucked up all the seats in the choir where the monks sat when they said service. These seats were like the seats in minsters; they were burned and the lead melted, although there was plenty of wood nearby, for the abbey stood among the woods and the rocks of stone. Pewter vessels were stolen away and hidden in the rocks, and it seemed that every person was intent upon filching and spoiling what he could. Even those who had been content to permit the monks’ worship and do great reverence at their matins, masses and services two days previously were no less happy to pilfer, which is strange, that they could one day think it to be the house of God and the next the house of the Devil – or else they would not have been so ready to have spoiled it.
But it is not a thing to be wondered at by such persons that mark the inconstancy of the rude people in whom a man may graft a new religion every day. Did not the same Jews worship Christ on Sunday, who had done so much good to them, yet on the following Friday cried ‘Crucify him’?

For the better proof of this, thirty years after the Suppression I asked my father, who had bought part of the timber of the church and all the timber in the steeple with the bell frame, (in the steeple eight or nine bells hung - the last but one could not be bought today for £20 – and I myself saw these bells hanging there over a year after the Suppression) if he thought well of the religious people and of the religion followed at that time? And he told me yes, for he saw no cause to the contrary: well, I said, then how did it come to pass that you were so ready to destroy and spoil the thing that you thought so well of? What should I have done, he asked, might not I as well as the others have had some profit from the spoils of the abbey? For I saw that everything would disappear and therefore I did as the others did.’

Thus you may see that those who thought well of the religious, and those who thought otherwise, agreed enough to spoil them. Such a devil is covetousness and mammon! And such is the providence of God to punish sinners in making themselves instruments to punish themselves and all their posterity from generation to generation! For no doubt there have been millions of millions that have repented since, but all too late. And this is the extent of my knowledge relating to the fall of Roche Abbey."
Online source: cistercians.shef.ac.uk 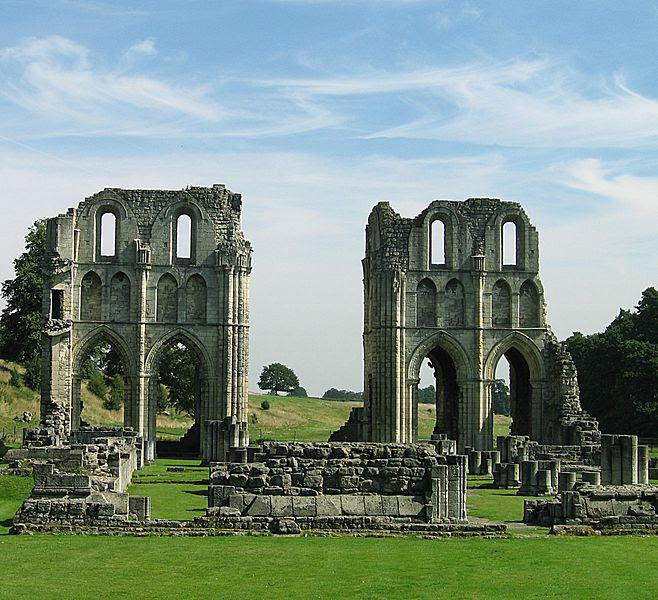 The other reason is, as I wrote, more personal, but curious.
In, I think, the summer of 1955, when I was not yet four, one summer Sunday my parents took me, and my paternal grandmother, then living at Tickhill, out for the afternoon in the car. My mother suggested we visited the ruins of Roche abbey, which she had not visited although she had seen the signposts to it. This we dutifully did, although I remember nothing specifically of that part of the visit. We then went on, and this I do vaguely recall, to Blyth in north Nottinghamshire where we visited the Norman priory church - now the parish church  - and the now levelled but then still-standing ruins of Blyth Hall. My mother always maintained that therafter I assumed that a day out in the car meant a trip to see ruins and so my historical enthusiasm was fired. I do still recall our collecting my grandmother and the Blyth part of the day, and that I had indeed been to Roche.

I occasionally visited Roche on other occasions over the years, but not until about thirty years later did I realise a significant link. When looking at the published Parish Registers for Saddleworth in the mid-Pennines where the Whitehead family were settled for centuries  I discovered that the earliest recorded member of the family, the progenitor of many branches in that township of scattered hamlets in a remote and distinctive area,  was one Henry Whitehead, churchwarden of the chapel of St Chad in 1546, and in the 1530s bailiff of the lands there of Roche Abbey. There being no Whiteheads recorded in Saddleworth earlier I assume he came from outside the local community, but settled in and founded our family there. My branch left Saddleworth for the bright lights of Manchester in the mid-nineteenth century, and our own line came to Doncaster at the very end of the century.

The land of which he was bailiff had been given to Roche in the early fourteenth century by Sir Warin de Scargill (reputedly an ancestor of Arthur of more recent fame) and Sir Warin's fine effigy can be seen in the church at Darrington, two miles outside my own home town of Pontefract.

Funny how things go round in circles...