Today is the 125th anniversary of the accession of Wilhelm II as German Emperor and King of Prussia in 1888, the third Kaiser to rule in the Year of Three Emperors.

Reading about him, and the pivotal role he played, or is claimed to have played, in the events of the succeeding decades what emerges is a complex man.  He was intelligent and talented, yet also neurotic, and clearly suffered from mood swings. Brash at times, tactful and sensitive at others, and could certainly display charm and humour. In his public speeches and statements he was prone to sweeping rhetorical phrases, not a few of which came back to haunt him. I know various attempts have been made to analyse him in terms of pschology or as a victim of birth trauma, but I wonder if he might have suffered from a form of Asperger's Syndrome - that could account for the retentive memory and some of the social awkwardnesses he manifested.

The physical disability he had from birth of a withered left arm, usually carefully concealed in pictures and in his daily life, clearly made his life difficult from the earliest days of educating the heir to the Prussian throne to be able to perform his public duties - for example he clearly suffered greatly as a child in being forced to learn to ride - and the conciousness of that disability may well have compounded whatever other difficulties he suffered from.

Through his upbringing and education he had a complicated relationship with his mother and her country - they were too much alike in many ways. To some Germans he was, and is, seen as half English, and not sufficiently Prussian. To the British he was a sometimes popular figure, but more often not popular one, and an object of suspicion with his Naval expansion in the years before 1914, then an object of concentrated venom, and finally, perhaps, a curious survival as the exile of Doorn. 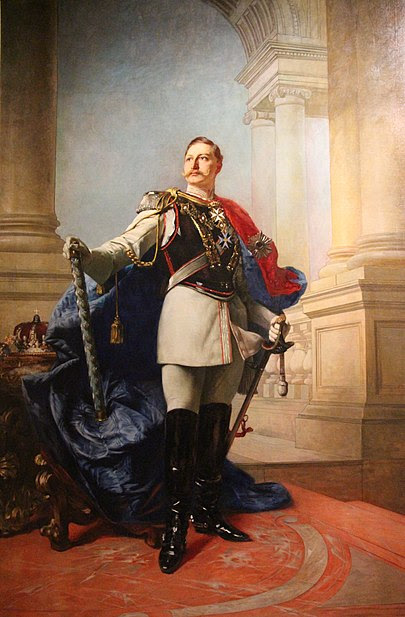 Striking a pose - the young Emperor-King at his most grandiloquent.
A state portrait of him as King of Prussia in 1890 by Max Koner.
He is wearing the mantle of the Order of the Black Eagle and has his crown as King of Prussia at his side

The other year I read Giles McDonagh's excellent biography of him The Last Kaiser and I currently have Christopher Clark's biography Kaiser Wilhelm II: A life in Power on order, which promises to be an excellent and well researched study. From what I have seen of it so far it is an insightful study into the Kaiser as monarch, and what his role actually was in government.