The sixtieth anniversary of the Coronation

Today is the sixtieth anniversary of the coronation of Her Majesty The Queen in 1953.

Although there have been developments, additions and subractions (some good, some regretable) over the centuries this was in essence and in many respects in substance the same as the coronation of King Edgar 980 years earlier in 973 at bath. Indeed the English rite influenced continental rites of coronation in that era.

Dr Eliza Filby had an article in the Daily Telegraph about the Coronation, its planning and about its significance today which can be read here.

The Enthronement at the Coronation of Queen Elizabeth II
The Queen, vested in the golden Coronation Royal Robe, has the Crown of St Edward on her head and holds the Soverign's Sceptre in her right hand and the Sceptre with the Dove in her left hand 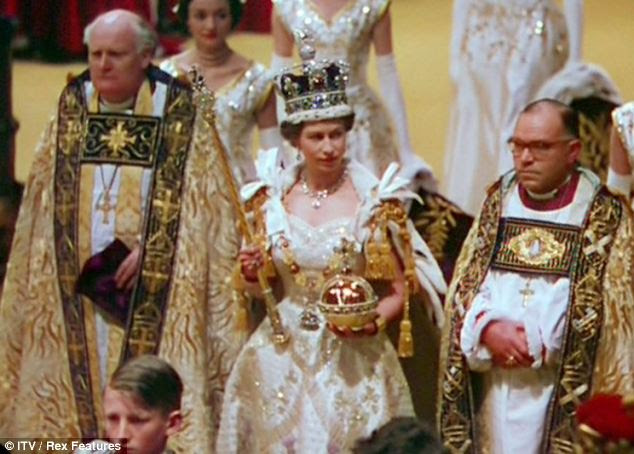 The Queen supported by the Bishops of Durham and Bath and Wells
processes from the Sanctuary following the ceremony.

The Coronation made a great impact on those who witnessed it, especially through the new ly availabel medium of television, and it reamins a potent memory and point of reference. I was rather too young to appreciate what was going on. At the age of twenty two months I was taken by my parents to watch the ceremony on my maternal grandmother's television. Alas I slept throughout the broadcast, though my earliest dateable memory is of my father coming home with a commemorative mug given by the borough council to the children of the town. In one sense I have been catching up or making up ever since for sleeping through such an historic and significant event .  At home we had a splendid book about the Coronation in all its aspects and published by Pitkins, and looking at that was treat and a  stimulus to my interest in monarchy and history.