"O Pomfret, Pomfret! O thou bloody prison,
Fatal and ominous to noble peers!
Within the guilty closure of thy walls
Richard the second here was hack'd to death;
And, for more slander to thy dismal seat,
We give thee up our guiltless blood to drink."

Thus does the character of Anthony Woodville Earl Rivers apostrophise the castle at Pontefract in Richard III. In the scene he, his nephew Lord Richard Grey and Sir Thomas Vaughan are about to be decapitated on the orders of Richard Duke of Gloucester as part of his seizure of the throne 525 years ago in June 1483. The Pontefract executions occurred on June 25th. 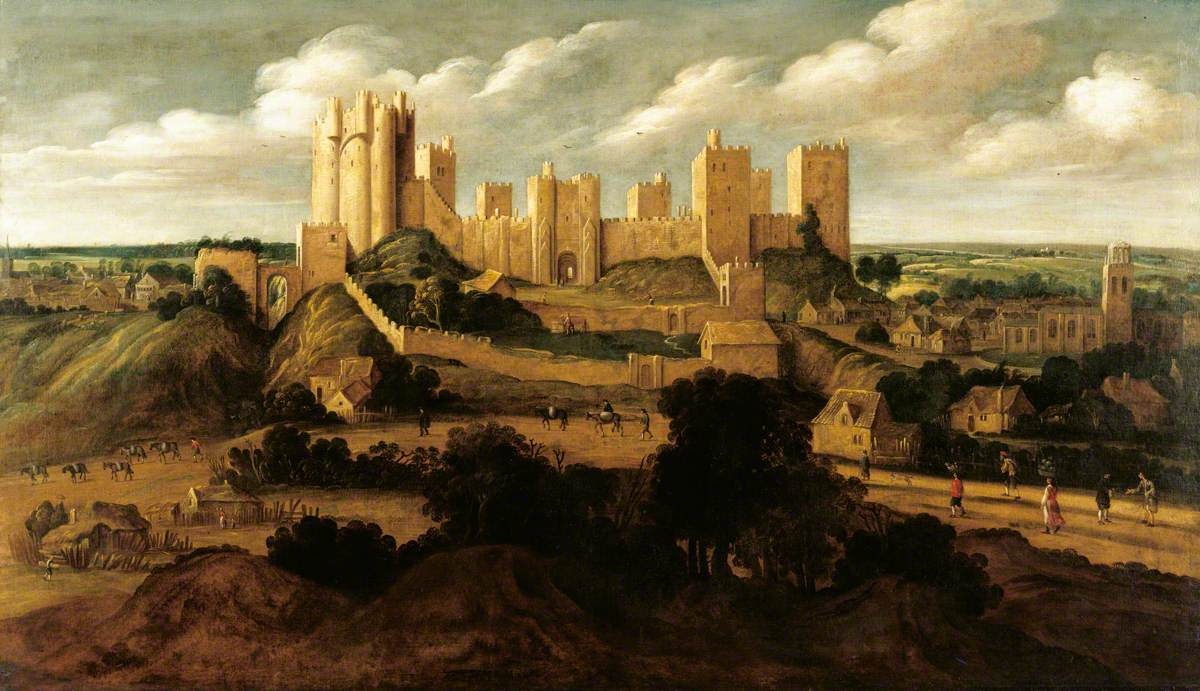 The immediate beginning of these events was the death on April 9th of King Edward IV, and the accession of his twelve year old son King Edward V, who was then at Ludlow. He left there in the company of, amongst others, his mother's brother Lord Rivers, his half brother Lord Richard (second son of Queen Elizabeth's first marriage) and Sir Thomas Vaughan, his father's Treasurer of the Household, on April 24th to travel to London.

On April 29th they were met at Stony Stratford by Richard Duke of Gloucester, the late King's surviving younger brother, aged 31, and Henry Duke of Buckingham, who was married to Queen Elizabeth and Rivers' sister Catherine, and was 27. The party dined together, but on the following day Rivers, Grey and Vaughan were arrested on a charge of plotting against the Duke of Glouceser and sent north, into Richard's political heartland. Rivers was sent to Sheriff Hutton Castle and Grey to Middleham castle - both of them properties acquired by Duke Richard by his marriage to the daughter of Warwick the Kingmaker. Vaughan was sent to Pontefract, the other castle which served as the base for Gloucester's role as the King's representitive in the north. The boy King was taken to London, lodged in state in the Tower, and plans made for his coronation, but which continued to be postponed.

Gloucester's actions, if not intended from the beginning as a bid for the throne may reflect fears on his part of being excluded by the Woodville-Grey faction from his natural role as the new King's uncle and protector, and an awarenes s of the fates of the two previous Dukes of Gloucester, Thomas and Humphrey, following royal minorities. He may also have considered the Woodvilles responsible in part at least for the downfall and death of his brother George Duke of Clarence in 1477-8, not so much from affection as from fear of a similar fate. Buckingham, if not merely opportunistic, may well have resented being married as a boy to Catherine Woodville. It apears clear that the Woodvilles had never ben popular with at least a significant part of the Yorkist establishment

On June 10th letters were taken north by Sir Richard Ratcliffe, one of the Duke of Gloucester's closest lieutenants to raise an army and on June 13th Lord Hastings, Chamberlain to the King's late father, was seized and beheaded in the Tower of London. On June 22nd the story of the pre-contact of the late King Edward and Lady Eleanor Butler, which would invalidate the marraige of the King to Elizabeth Woodville and hence deprive King Edward V of his right to the throne, was first publicised in London. 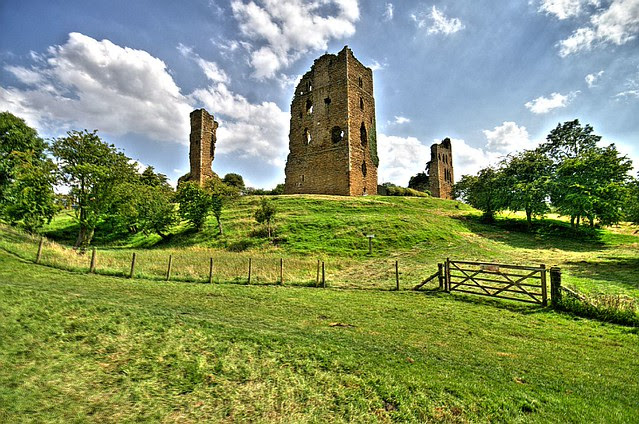 Sheriff Hutton Castle from the north-west

On June 23rd Rivers, doubtless hearing the worst made his last will as Sheriff Hutton, though he seems to have had some expectation of  travelling to the south:

"I, Anthony Wodevile, in the castle of Sheriff Hutton, bequeath all my lands that were my father's, to my brother Sir Edward Wodevile, and his heirs male, my heart to be buried (if I die south of Trent) before our lady of Pewe, beside St. Stephen's college at Westminster, also the lands that were my first wife's the Lady Scales, and Thomas Lord Scales's, her brother, to my brother Sir Edward, and his heirs male; but he to whom it should come, before he took possession thereof, to deduct 500 marks to be imployed for the souls of the said lady and her brother, and the souls of all the Scales's blood, &c. and to find a priest for one year to pray for them, his own soul, and all Christian souls, at our lady of Pewe; and another priest to sing at the chapel of the Rodes, in Greenwich, for his own soul, and all christian souls."

He willed the manor of Tirington Hall, in Middleton in Norfolk, the hundred of Frebridge, the manor of Wolverton and advowson, in Norfolk, with the manor of Rokeys in Berkey, in Hertfordshire, to be sold, to establish a hospital at Rochester, for 13 poor folk.
He directed that his apparel for his body was to be sold, with his horse-harness, &c. and with the money resulting therefrom, shirts and smocks to be bought for poor folks.

He appointed the Lady Willoughby, late wife of Sir Jervace Clifton, William Tunstall, Robert Poynts, Richard Hawte, William Catesby, Andrew Dimock, overseers of his will; but it does not appear that it was proved.

He left no children by his two wives, but by a mistress, called Gwentlian, only daughter of Sir William Stradling, third son of Sir William Stradling of Glamorgan , and Isabel, his wife, he had a daughter Margaret, who married Sir Robert Poynts, of Acton Iron in Gloucestershire.
Blomefield Norfolk 1809 vol 9  sub Middleton
That same day or the following he was taken the forty or so miles to Pontefract where he rejoined his nephew and Vaughan. Following an apparently perfunctory semblance of a trial presided over by the Earl of Northumberland the three men were behreaded in the presence of the northern army assembled by Ratcliffe, who seems to have been Gloucester's agent in the whole business. Ratcliffe announced to the ose present that the men were traitors. According to Edward Hall in the following century their bodies were buried naked in the nearby Cluniac monastery of St John - they were not interred as had been victims of the battle of Wakefield in the Dominican hous en the town, as they do not  feature in the comprehensive list of burials there made on the eve of the dissolution.

A hair shirt worn by Rivers was offered up and hung before the statue at the shrine of Our Lady of Doncaster in that town's Carmelite friary - perhaps an attempt to fulfill Rivers' request for his heart to be buried before Our Lady of Pew at Westminster. Aged 40 or 41 at the time of his death from his will Rivers appears pious within the courtly traditions of the era, and he was the most accomplished and cultivated member of his family according to the available evidence. There is an online account of his life here and the study by Michael Hicks in the Oxford DNB is here.

His nephew Lord Richard Grey was perhaps 23 at the time he died, and there is  an online life here.
The Oxford DNB account of him by Rosemary Horrox is here.


Sir Thomas Vaughan was about 73. There is an online article about him here,and the life by Prof. R.A. Griffiths in the Oxford DNB is available here.  During his lifetime he had prepared a tomb with a monumental  for himself in Westminster abbey, and there is an article about that here.

The brass of Sir Thomas Vaughan in Westminster Abbey


Sir Richard Ratcliffe, who was clearly in charge of events at Pontefract, was to be immortalised in the couplet "The Rat, the Cat and Lovell our Dog rule all England under Richard the Hog" over the next two years before his death at Bosworth along with the King he served - William Catesby (named by Rivers as an executor in his will) was executed after that battle, and Francis Lord Lovell disappeared.
There is an online life of Ratcliffe here, and the life by Rosemary Horrox in the Oxford DNB  can be read here.

A fourth man, Sir Richard Haute, another executor of Rivers, is sometimes said to have been killed at Pontefract, but he was spared, and lived quietly through the next two years and died in 1492. The  article by Peter Fleming in the Oxford DNB about the Haute family can be read here.

On the same day as the Pontefract executions the crown was offered to Richard Duke of Gloucester on the basis of his being the next lawful successor to King Edward IV, and he commenced his reign as King Richard III from the next day June 26th.

I am at present, in an amateur capacity, researching the above mentioned Thomas Vaughan, and am particularly interested in his tomb at Westminster Abbey. Your statement "During his lifetime he had prepared a tomb with a monumental for himself in Westminster abbey," is intriguing and has me just a tad excited. I have found no other reference to this at all. Sadly the link doesn't work, would you be kind enough to let me know where you obtained the link or the information. I would be very grateful.
Kind regards
Andrea Povey