The Nativity of St John the Baptist

Today is the Solemnity of the Nativity of St John the Baptist, and by tradition Midsummer Day - displacing a pagan festival. The Nativity of St John is one of only three births to be commemorated liturgically - the others are, of course, those of Our Lord and Our Lady. St John has this honour because he is understood to have been pre-santified in the womb of St Elizabeth.

At the Oxford Oratoty last night we had the first Vespers of the Nativity, followed by the Vigil Mass, to begin the observance of the Solemnity.

I have noted in previous posts the point made to me by an Oratorian that whereas in the medieval period devotion to St John was widespread and he frequently appeared in paintings, sculpture and as a patron of churches and other foundations, today his cultus has largely disappeared from popular conciousness. As I think about it church dedications to him may well have developed from the twelfth century in England, rather than earlier, although clearly St John's Chester appears to have had the dedication to him by 973. 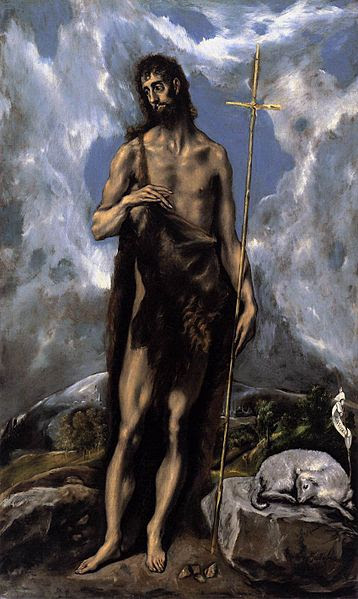 Most post-medieval depictions of St John seem to me to lack the spiritual insight of medieval ones. However this painting by El Greco does I think, capture the continuing spirit of medieval devotion, and, I sense, reflects a particular feature of spiritual continuity in the Spain of the reign of King Philip II - late-medieval Catholicism had flowed in an undisturbed stream into the post-Tridentine expression of it.

From a sermon by St Augustine appointed for today's Office of Readings:

" The Church observes the birth of John as in some way sacred; and you will not find any other of the great men of old whose birth we celebrate officially. We celebrate John’s, as we celebrate Christ’s. This point cannot be passed over in silence, and if I may not perhaps be able to explain it in the way that such an important matter deserves, it is still worth thinking about it a little more deeply and fruitfully than usual.

I have proposed some matters for inquiry, and listed in advance some things that need to be discussed. I have introduced these points even if we are not up to examining all the twists and turns of such a great mystery, either for lack of capacity or for lack of time. You will be taught much better by the one who speaks in you even when I am not here; the one about whom you think loving thoughts, the one whom you have taken into your hearts and whose temple you have become.

John, it seems, has been inserted as a kind of boundary between the two Testaments, the Old and the New. That he is somehow or other a boundary is something that the Lord himself indicates when he says, The Law and the prophets were until John. So he represents the old and heralds the new. Because he represents the old, he is born of an elderly couple; because he represents the new, he is revealed as a prophet in his mother’s womb. You will remember that, before he was born, at Mary’s arrival he leapt in his mother’s womb. Already he had been marked out there, designated before he was born; it was already shown whose forerunner he would be, even before he saw him. These are divine matters, and exceed the measure of human frailty. Finally, he is born, he receives a name, and his father’s tongue is loosed.

Zachary is struck dumb and loses his voice, until John, the Lord’s forerunner, is born and releases his voice for him. What does Zachary’s silence mean, but that prophecy was obscure and, before the proclamation of Christ, somehow concealed and shut up? It is released and opened up by his arrival, it becomes clear when the one who was being prophesied is about to come. The releasing of Zachary’s voice at the birth of John has the same significance as the tearing of the veil of the Temple at the crucifixion of Christ. If John were meant to proclaim himself, he would not be opening Zachary’s mouth. The tongue is released because a voice is being born – for when John was already heralding the Lord, he was asked, Who are you and he replied I am the voice of one crying in the wilderness.

John is the voice, but the Lord in the beginning was the Word. John is a voice for a time, but Christ is the eternal Word from the beginning."

I see from an article in The Times today about Midsummer Day that although it is not the longest day - that was three days ago - it is the day with the latest sunset. This is a consequence of the elliptical orbit of earth around the Sun. Similarly the day with the earliest sunrise is June 17th or 18th. According to farming folklore rain on Midsummer Day was deemed to be unlucky as it portended a wet harvest.

As afeast in the pre- hrvest season and when the days were at their longest it was asuitable one for popular gatherings such as the meeting of Tynwald in the Isle of Man, at the parish of St John's, but the 1752 calendar correction meant that Tynwald Day is now on July 5th, so as to keep a full legal year.