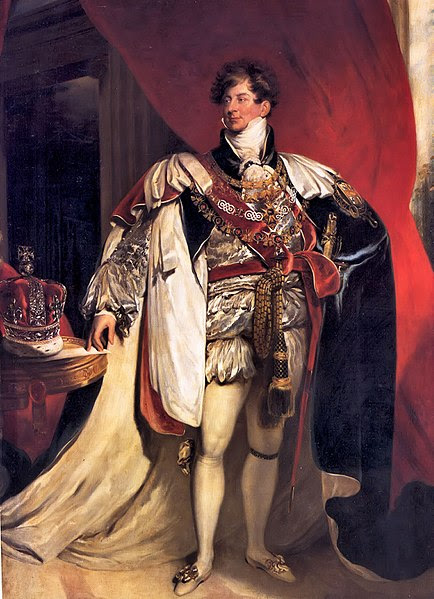 King George IV in the robes of the Order of the Garter
Sir Thomas Lawrence
The King is also wearing the collars of the Spanish Order of the Golden Fleece, and those of his own Orders of St Michael and St George and of the Bath in addition to that of the Garter. As Prince Regent he revised and extended the Order of the Bath in 1815, and founded that of St Michael and St George in 1818.
The crown at his side was made for his coronation in 1821, replacing that used since 1661. Used again for King William IV in 1831 it was replaced in 1838 by the present Imperial State Crown. The frames of both the 1661 and 1821 crowns can now be seen in the Tower of London
Image: Wikipedia
There is an online biography of the King here which seesm to be even handed in its assessment and explores his life in the context of his times.

It is not difficult to see why many people found him difficult and dislikeable, and also to see that he did have genuine abilities and excellent qualities. His legacy to the Monarchy is not inconsiderable - not only the building of Buckingham Palace and the drastic but dramatic restoration and rebuilding of Windsor Castle, but the acquisition of significant parts of the Royal Collection, as well as the extraordinary Brighton Pavlion, which his neice sold off. More importantly still may have been his visits to Ireland in 1821 and Scotland in 1822 - the first by a reigning sovereign respectively since 1399 and 1651. Although King William IV and Queen Victoria reacted against King George's style and lavish expenditure - not to say indulgence - he had created both the setting and the revived concept of the royal visit that have become very significant parts of the modern British monarchy. A complex man, often selfish, but one who managed to leave a not inconsiderable legacy.