St Augustine is not very frequently invoked as a patron saint by English medieval churches, although he became more popular in the nineteenth century. The outstanding medieval church under his patronage is that at Hedon in the East Riding of Yorkshire. There is something about it here.

The town of Hedon is a charming one and in the little known region of Holderness. There is something of the history of this ancient port and borough on the banks of the Humber on the town council's website which can be viewed here. Together with neighbouring towns and villages it is an area well worth exploring if you have an interest in medieval churches - some of which are really superb - or if you are seeking a tranquil, slightly old fashioned England. Philip Larkin describes some of these churches and their setting very well in one of his poems. As buildings they bear witness to the trading wealth of the medieval Humber and the cornlands of Holderness.

Although the town was continually losing out to its much bigger neighbour Kingston upon Hull during the fourteenth and fifteenth centuries  and the haven silted up, it still managed as a parish to complete the wonderful church, sometimes referred to as the King of Holderness, with this great central tower. 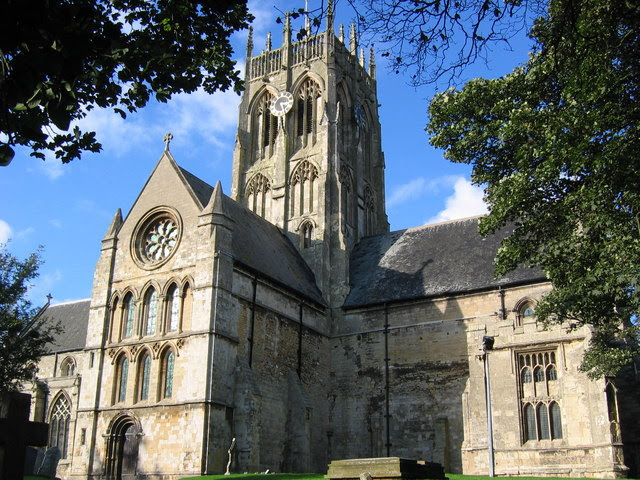 The tower has a ring of eight bells, the tenor bell weighing 17cwts 1qr 19lb.

Image: © Copyright Stephen Horncastle and licensed for reuse under this Creative Commons Licence.