The Transfiguration of Our Lord, which we celebrate today, is a feast which seems rather to have defeated Western artists. There are certainly paintings which are filled with swirling drapery and figures, but their literalism seems to get in the way of the spiritual insight they are hoping to convey. In this case Eastern, Orthodox art, with its more static and staid, hieratic imagery seems to achieve the desired effect and convey the spirituasl truth of an event which was clearly beyond the experience and indeed largely, the comprehension of the Apostolic witnesses. The Eastern tradition was one which, perhaps earlier than in the West, that was well placed to meditate upon the truths revealed upon Mount Tabor.

In keeping with that thought, here, from the modern Divine Office, is part of a sermon by Abbot Athanasius of St Catherine's on Mount Sinai. He began his life as a monk under the rule of Abbot John of the Ladder. After John's death, he succeeded him as  abbot. Besides being a great ascetic, Anastasius was an eloquent author of the lives of the saints as well as instructional writings. He led a bitter struggle against the heretics, the so called Acephalites [Akefalita - Headless Ones], who denied the decisions of the Fourth Ecumenical Council at Chalcedon in 451. He died at an old age in the year 685.

Upon Mount Tabor, Jesus revealed to his disciples a heavenly mystery. While living among them he had spoken of the kingdom and of his second coming in glory, but to banish from their hearts any possible doubt concerning the kingdom and to confirm their faith in what lay in the future by its prefiguration in the present, he gave them on Mount Tabor a wonderful vision of his glory, a foreshadowing of the kingdom of heaven. It was as if he said to them: “As time goes by you may be in danger of losing your faith. To save you from this I tell you now that some standing here listening to me will not taste death until they have seen the Son of Man coming in the glory of his Father.” Moreover, in order to assure us that Christ could command such power when he wished, the evangelist continues: Six days later, Jesus took with him Peter, James and John, and led them up a high mountain where they were alone. There, before their eyes, he was transfigured. His face shone like the sun, and his clothes became as white as light. Then the disciples saw Moses and Elijah appear, and they were talking to Jesus.
These are the divine wonders we celebrate today; this is the saving revelation given us upon the mountain; this is the festival of Christ that has drawn us here. Let us listen, then, to the sacred voice of God so compellingly calling us from on high, from the summit of the mountain, so that with the Lord’s chosen disciples we may penetrate the deep meaning of these holy mysteries, so far beyond our capacity to express. Jesus goes before us to show us the way, both up the mountain and into heaven, and – I speak boldly – it is for us now to follow him with all speed, yearning for the heavenly vision that will give us a share in his radiance, renew our spiritual nature and transform us into his own likeness, making us for ever sharers in his Godhead and raising us to heights as yet undreamed of.
Let us run with confidence and joy to enter into the cloud like Moses and Elijah, or like James and John. Let us be caught up like Peter to behold the divine vision and to be transfigured by that glorious transfiguration. Let us retire from the world, stand aloof from the earth, rise above the body, detach ourselves from creatures and turn to the creator, to whom Peter in ecstasy exclaimed: Lord, it is good for us to be here.
It is indeed good to be here, as you have said, Peter. It is good to be with Jesus and to remain here for ever. What greater happiness or higher honour could we have than to be with God, to be made like him and to live in his light?
Therefore, since each of us possesses God in his heart and is being transformed into his divine image, we also should cry out with joy: It is good for us to be here – here where all things shine with divine radiance, where there is joy and gladness and exultation; where there is nothing in our hearts but peace, serenity and stillness; where God is seen. For here, in our hearts, Christ takes up his abode together with the Father, saying as he enters: Today salvation has come to this house. With Christ, our hearts receive all the wealth of his eternal blessings, and there where they are stored up for us in him, we see reflected as in a mirror both the first fruits and the whole of the world to come.
Source : Universalis 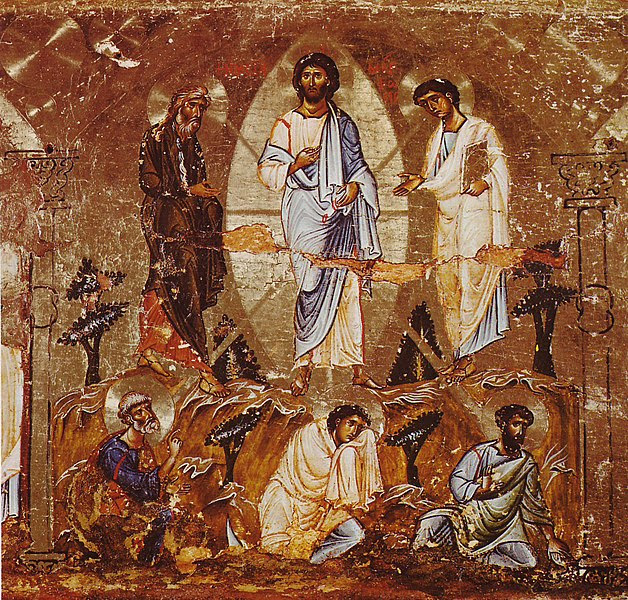